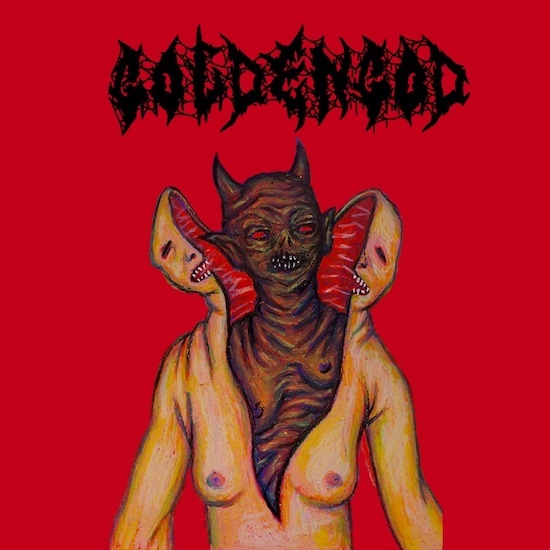 We’ve written repeatedly about the genre-splicing metal band Witchtrip from Winnipeg, Manitoba, Canada, premiering music from all three of the EPs they’ve released so far, including 2021’s Sledmetal. But it’s not Witchtrip that’s the subject of today’s premiere, so why are we mentioning them?

Well, it’s because today’s band, Golden God, is a Witchtrip side project that includes three of that band’s five members — Sean Kaye (guitar/vocals), Josh Buors (bass/vocals), and Adrian Meijn (drums). Golden God will soon be announcing their debut EP, and what we’ve got today is a track from it named “Flesh“.

Like Witchtrip, Golden God is also apparently not constrained by genre boundaries. “Flesh“, for example, brings into play elements of death metal, punk, hardcore, and more.

“Flesh” sets the hook with a slightly off-kilter drum rhythm and a gouging, growling, lead-weighted riff that sounds cold-hearted and cruel but is downright catchy. When the drums start battering, the riffing becomes more frenzied, skittering, and vicious — but no more vicious than the ferocious howls and roars or the feral, blackened snarls in the vocal department. On top of all that, the song segues into a bleak, forlorn melody coupled with yelled vocals, providing an added dimension to the organ-rupturing brutishness and deranged hostility.

And so the song as a whole is bruising, infuriated, and bleak, packing a visceral punch but contagious as well. Check it out below. The striking artwork was made by @shyfuck on IG, and it was recorded, mixed, and mastered by Jordan Voth.