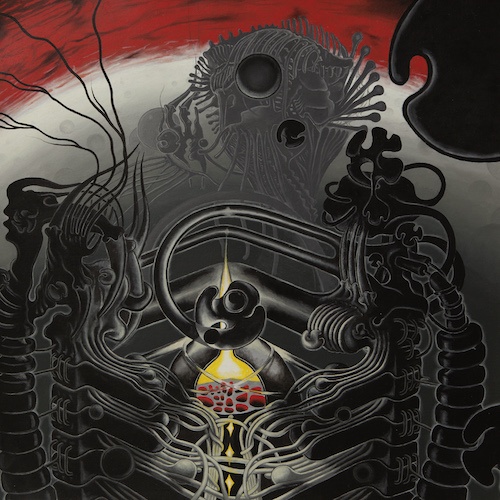 About five and a half years ago the then-unheralded Québec City band Deviant Process released their debut album, Paroxysm. It caught our attention, much as an unforeseen meteor shower would. Our man Andy Synn wrote about it here, in a review that included this passage:

“Imagine if you will a band who marry the hi-tech riff-craft of Anata to the high-octane melodic intensity of Beyond Creation, with more than a dash of the unconventional hookiness of bands like Gorod and Hieronymus Bosch (RIP), along with a generous helping of pure, groovesome heaviness, and you’ll probably find yourself somewhere in the vicinity of what Deviant Process sound like. But… and here’s the twist… the Canadian quartet do all that, and more, without ever sounding derivative or predictable.”

And now Deviant Process are returning at last, this time with a new album entitled Nurture on the Season of Mist label. It might not be as big a surprise as its predecessor was, because we already know what they’re capable of doing, yet it’s still a stunner. As SoM rightly proclaims, Nurture will be a big turn-on for “those obsessed with the likes of classic Death, Cynic and Pestilence as well as contemporaries Obscura, Beyond Creation and Fractal Universe“.

Two singles from the album have been released so far, and today we bring you a third one: “Homo Homini Deus”. 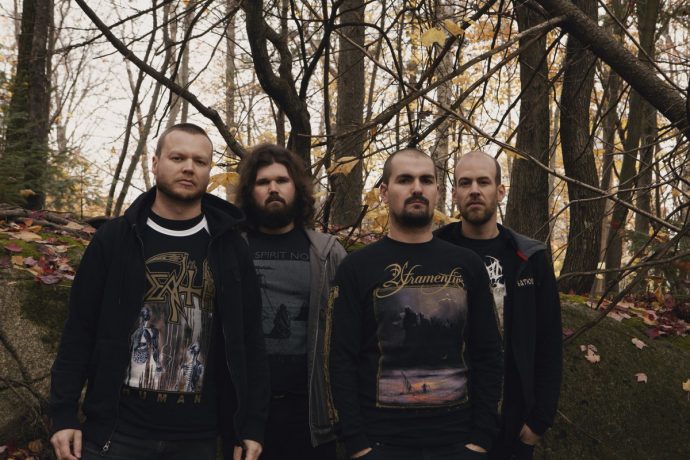 For its opening movement this new song discharges a wild, eye-popping strafing run of bomb-throwing and bullet-spitting drumwork, crazed guitar contortions, mesmerizing bass maneuvers, and scorching blackened screams. The impression is one of elaborate savagery, as finely constructed and tightly executed as it is explosive.

But that’s just the opening onslaught, and as the song progresses the band twist and turn it, diverting the path with mercurial, glittering arpeggios, bursts of bone-busting bombast, fluttering bass spotlights, and ebullient dual-guitar soloing. Ingredients of wondrous mystery and towering grandeur surface and subside again into the rushing fireworks display.

By the end, you might have one of those WTF DID I JUST HEAR?!? moments, only then to find that the song is still playing in your head, because the track’s grooves, riffs, and abundant instrumental interplays turn out to be “catchy” as well as brain-twisting. Deviant Process have emphasized that they’re not the kind of band where it’s “showing off first, music second”, but instead one that’s devoted to creating actual songs that listeners will remember, and that’s evident in what you’re about to hear.

“‘Homo Homini Deus’! Probably one of the craziest pieces from Nurture, it’s got hooks and headaches for days! Pre-orders for Nurture are still open for all physical formats and merch items on the SOM store or our own Bandcamp for Canadian residents! Thanks for the support and have a good listening!”

Nurture will be released by Season of Mist on October 15th, and it is indeed available for pre-order now. The album was produced, engineered, mixed, and mastered by François C. Fortin, and the wonderful cover art was created by by Sébastien Bouchard.

Along with useful links, we’re now also including streams of those previous two singles, “Asynchronous” and “The Hammer of Dogma“.