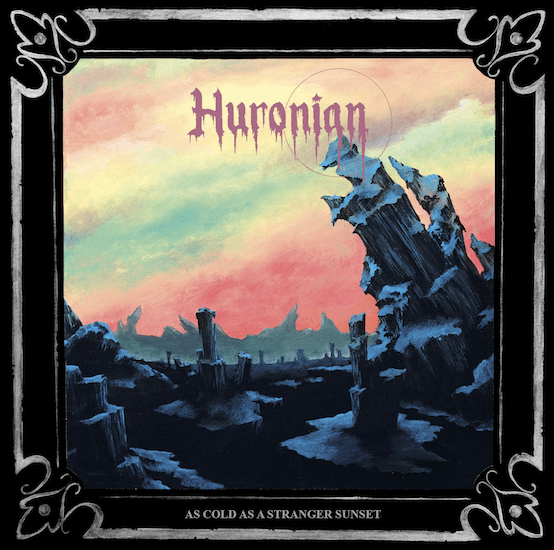 As we all painfully know, the pandemic has been an immense black cloud oppressively hanging over the globe with no dissipation in sight. Yet it has had silver linings, including the formation of new bands during lockdowns as creative impulses have still found ways to breathe.

The Italian trio Huronian is one such raging pandemic child. It first took shape through the will of DL and UMP in early 2020, with the inspiration of following in the path of classic melodic death metal and death/black metal manifested by such groups as Dissection, At the Gates, and Sacramentum. Eventually joined by drummer MM, they worked together remotely and recorded a demo that was digitally released last year, and now they’ve readied a debut album named As Cold As A Stranger Sunset that’s set for release on October 29th by the French label Dolorem Records.

This 8-track release is going to be an eye-opener, and you’ll understand why we think that when you listen to the album track we’re premiering today, which has the completely fitting title “Ever Burning“.

The song is powerfully electrifying but dynamically multi-faceted, and in all its twists and turns it’s enthralling.

After a quick drum progression, the track explodes in glorious mayhen. The music is packed with swarming, swirling, and slashing riffs, propelled by a riveting drum performance and vivid bass upheavals. The music has a wild, loose feel, segmented only by brief moments when only the drums can be heard. And speaking of raw, the vocalist has a high howl that’s reminiscent of the great L-G Petrov. The music gets the blood boiling and will get your head moving too…

… but the band abruptly switch gears, dramatically changing the song. A vivid yet moody acoustic guitar melody becomes the background for a soulful and entrancing solo tuned to the sound of a violin and gloomy spoken words. When the full band return, the music preserves the darkness in that interlude, but renders it in more grim, despairing, and anguished tones. The rhythm section again create sounds of increasingly furious turbulence, the vocals are again as raw as a fresh wound, and the layered guitars swirl in their distress like a violent whirlpool.

Dolorem Records will release the new record on CD with a 12-page booklet that includes all the lyrics. It was mixed by the band’s Umberto Poncina (guitars, bass, synths), and it was mastered by Damian Herring (Horrendous) at Watchtower Studios. The cover art was created by the band’s vocalist Daniele Lupidi (Abyssal Ascendant, Valgrind). And now that we’ve named two of the band’s members, let’s also give credit to the terrific drumwork of Marcello Malagoli.