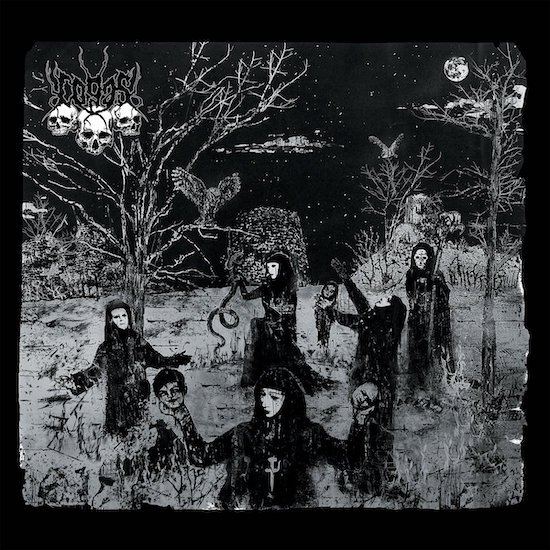 “Spewed from a place of utter anxiety, extreme metal harbingers COGAS impose a new strain of dark death-black metal annihilation entirely their own, stitching together the timeless brutality of old school death metal and the transformative sonic bedlam of the current visionary black metal crop, to create a majestic and emotive extreme metal behemoth of epic magnitude”.

We almost never quote from promotional materials for music we’re premiering or reviewing, preferring to lay out our own thoughts in our own words — and we will certainly do that here. But that paragraph above is worth quoting because it does provide a useful and accurate introduction to the debut album of this UK band we’re now premiering in full, in advance of its September 17 release — as does this further paragraph from the press materials:

“Weaving together layers of dense textures, ceremonial rhythms and looming atmospheres, COGAS excels at the art of organized chaos through sound. Across this new material the London-based band blends elements of extreme metal and macabre stories of Sardinian witchcraft (the Italian island is the homeland of two of the band members (frontman Piero Mura and guitarist Davide Ambu) with ambient explorations, epic sensibilities and grinding walls of sound that defy categorization”. 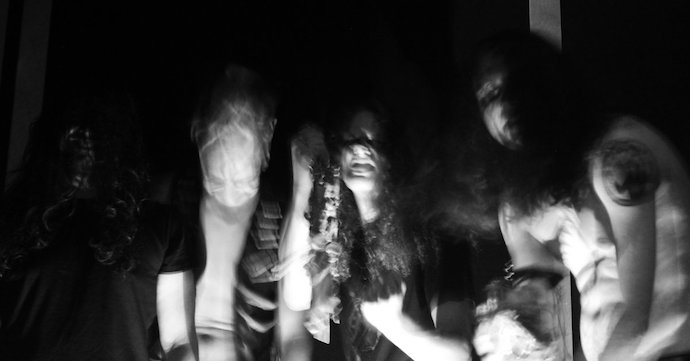 And now for our own impressions:

The assembled vocals at the outset of the opening track (“Mistress Of The Damned”) sound like a convocation of demons, whose incantations lead into brazenly imperious and defiantly caustic riffs and rumbling, tumbling drums — which in turn transform into a different round of swirling and swarming riffage and haughty, hostile growls. The changes keep coming as the band jolt and jar the senses, assault the spine, and continue to unfurl banners of grim, grand, and violent melody.

What you’ll notice immediately from just the opening track is that all the riffs have sharp hooks, every one of them creating a contagious impact, and that the band are also capable of generating visceral, blood-pumping intensity. But what you’ll learn from the opening of the second track (the title song) is that Cogas aren’t a one-trick pony, and that throwing surprises in your path is part of their creative make-up.

That opening instrumental sequence is comparatively subdued (though the drumming still seizes attention), powerfully beguiling, and foreign to the conventions of black metal. The guitars glitter, ring, and become hypnotic — and although an entire track of such soft, jazz-influenced spellcasting wouldn’t have been at all unwelcome, another big change is coming. The band take that seductive opening melody and carry it forward with abrading riffs over increasingly tumultuous drumming and howling vocal hostility, and then really kick the music into racing gear, while also transforming the melancholy feeling of the melody into seizures of delirium and anguish, of heartbreak and pain. And once again, all those morphing and whirring riffs (and yet a couple of other mesmerizing instrumental segments) sink into the listener’s head as they go. 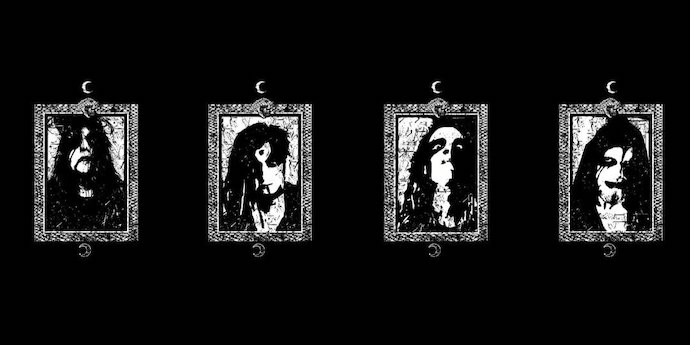 By the time you reach the third track, “Sulphur”, it will be convincingly apparent that the emotional content of Cogas‘ songs is as important to the album’s appeal as its frequently assaulting intensity. The flow of the music across the tracks has also been ingeniously planned, because “Sulphur” ratchets up the grim and crazed barbarity of the music, creating a hammering and harrowing experience — yet it too incorporates melodic riffing that’s sorrowful and stricken, and the despair that surfaces in the music will likely be what you remember most about it.

It’s fair to say that there are no weak links in the track list, and no weak spots in the performances. Every song is a gripping experience, each one seizing attention in changing ways, all of them having their own emotionally powerful melodies carried across an ebb and flow of speed, volume, rhythmic variation, and “physical” impact. The band continually prove they’re capable of administering a bone-breaking beating and igniting ravaging sonic conflagrations, but also continually prove their ability to evoke changing moods in memorable ways.

Astutely, they also remain conscious of varying the flow of intensity and of creating contrasts — the presence of “Coffin Mandatory” as a dreamlike interlude in between the elaborate riot and ruin of “A Dying Sun” and “A Deceiving Light Through The Mist” is a prime example, and so is the somber acoustic guitar melody that opens the dramatic and soul-shattering album closer “Ettagramma”.

In sum, Unconscious Sons Of The Reptile God is one of those album experiences in which you can get wholly carried away, firmly ensnared by a band who demonstrate formidable songwriting ability and equally formidable technical skill, and who make you feel at a deep level all the shades of dark mood that inspired the music.

To provide further insights into the album, here’s some of what the band have written about it:

“Unconscious Sons of the Reptile God” is a journey through the flesh that turns into spirit.

A metaphor about how little earthly power can do compared to the fate that rules our universe.

Despite this, the album is a glorification of both, as the tracklist is in fact divided into two narrative parts.

The first part of the concept sees a material being allowed to enter and enjoy such a universe, unaware of the consequences of the actions. The second part revolves around the being’s realisation of their inferiority in front of the entity from which they have drawn their power, accepting the destiny aware of having been deceived, but nevertheless not regretting having walked this path.

“Unconscious Sons of the Reptile God” could be summed up as a story about a case of Stockholm Syndrome’s condition, with the Devil and our Coga (Sardinian witch) as key players.

Credits: The drums were recorded by Jake Saunders at Satellite Studios. The album was beautifully mixed and mastered by Davide Tavecchia at Twighlight Studio. The attention-grabbing cover art was created by Coito Negato.

No Responses to “AN NCS ALBUM PREMIERE (AND A REVIEW): COGAS — “UNCONSCIOUS SONS OF THE REPTILE GOD””