(The new Carcass album is being released today by Nuclear Blast, and to celebrate the occasion we have a review by DGR that compares them to… well… you’ll see.)

In the before times when restaurants were a thing and you were lucky enough to live in a mid-sized town, then you had an increasing chance of finding a restaurant in town that you loved and that treated everybody like shit. There are, of course, gimmick places like this where the service is a Disney-fied version of the sort of genuine scorn you’d encounter at such a place. But, if you had the real thing, you’d immediately recognize the atmosphere — of you being an inconvenience by being there, and the sort of “get your food and get out attitude” that would color your whole impression of the place.

Usually, places like that made about four or five dishes, tops — the one I frequented only made three, and to be honest, I’m convinced the third one was a myth because I only ever saw the spaghetti and the garlic bread and that was it — but those four to five dishes were really, really good. Those sorts of restaurants were unyielding, in that you as a customer were a known quantity, and likewise, so was how they would treat you. You came to an agreement, though: As long as you understood that, you could generally get by and, dare I say it, enjoy yourself.

Over the years this is how I’ve come to view Carcass. 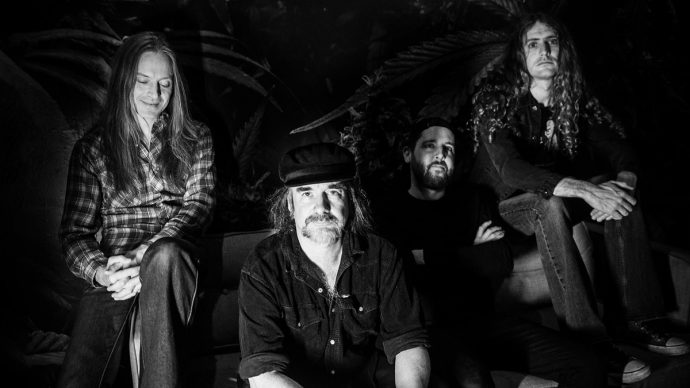 The band’s newest full-length, Torn Arteries, is only their second since returning to us with Surgical Steel. They have filled that intervening time with a collection of EPs but there is still a certain amount of prestige granted to the full-length release that is undeniable – especially when you have an eight-year gap between them.

Carcass, despite being one of heavy metal’s cultural pillars, are also one of the most unassuming bands out there. There’s no spectacle to them, they just are. It’s four dudes. What they are is of course really fucking good at what they do, one of those bands that have a really good median so that you can throw their entire collected works on and just go to town for a while. I’d be tempted to give them the gateway band treatment if it weren’t for the fact that they – like At The Gates – still have the thing for me where every release of theirs initially feels precious, like I’ll never hear from them again simply because of the fact that they had landmark albums early on and then were dormant for so long.

With Torn Arteries though, I think I’ve reached the point where I view them in the same way I do my beloved shitty-service restaurant. They have four or five things they are really good at and anything else is a pleasant surprise. I’m not asking them to reach far out, sometimes I just enjoy them for just being.

Where you land with Torn Arteries likely depends on which sort of meals you prefer from the Carcass menu. Generally speaking, Torn Arteries has two modes: Slow and groovy, fast and thrashy – which you’ll probably recognize as being pretty S.O.P. for  Carcass since the days of Heartwork on. The four-piece are criminally good at writing catchy as hell guitar melodies, and even the simplest and most braindead riff work allows the rhythm section to just pound along while Jeff Walker snarls over the whole affair. Especially this time around, where it seems like Carcass are having a blast poking fun at the death metal genre, knowing full well their love for it and just how good they are at it. I prefer the speedier Carcass, which makes Torn Arteries an interesting experience. It’s surprisingly surgical – heyooo! – in just how divided in half it is, between slow tracks and faster tunes. The faster songs are admittedly, some of the most base-form Carcass stuff out there – though I appreciated the roller coaster ride and the rug being yanked out from under me during the song “Eleanor Rigor Mortis” – yet the built to forever be a live intro of the titular “Torn Arteries” song and the sequel-sing-a-long nature of “The Scythe’s Remorseless Swing” that closes things out prove themselves to be highlights.

For all the talk of how Carcass are very much in their comfort zone on Torn Arteries there are a few ear-perking segments. For all the credit the guitar tag-team of Bill Steer and Tom Draper deserve and will get here – they work damned hard to keep even the slower songs interesting – Dan Wilding winds up intro-ing a lot of the songs, so you know very well that they also have a pretty talented drummer in the fold.

Lip service must also be paid to the song “Flesh Ripping Torment Limited” which (and keep in mind that a lot of this must be couched with the caveat of “For Carcass”) goes weirdly prog with its nearly-ten-minute run time and extended bridge segment. You’d think this was a gag by description, but slotted in between the more traditional “The Devil Rides Out” and “Kelly’s Meat Emporium”, “Flesh Ripping Torment Limited” is likely to catch a few people on the back foot – especially when you think it is starting to wrap itself up about halfway through. The existence of an official “Wake Up And Smell The Carcass” song, repeating the title used for compilations when the band were dormant, is also another fun bit of trivia that’s included within the Torn Arteries offerings.

Generally speaking, Torn Arteries is a good and enjoyable Carcass album. It fits in perfectly well right alongside everything the band have done since returning with Surgical Steel and makes for a fun handful of hours as well. Despite being a weighty fifty minutes, it manages to hold the attention with every guitar solo that forces its way to the front. Is it world-changing? Nah. But Carcass did a lot of that early on when death metal was in its rapidly morphing evolutionary state and you could get by just by being a bunch of loud assholes in the late ’80s and early ’90s.

Carcass made albums that have contributed to entire genre foundations, and nowadays they seem content just being stunningly good at thrashier death metal tracks and blues-inflected slower grooves while still maintaining the sneering attitude. Those are the building blocks that make up Torn Arteries, and much like my beloved garbage-service restaurant (now defunct in favor of becoming a small boutique spot), the handful of dishes and one really adventurous track are as enjoyable as ever. You know what you’re in for here and the band don’t fail to satisfy expectations.