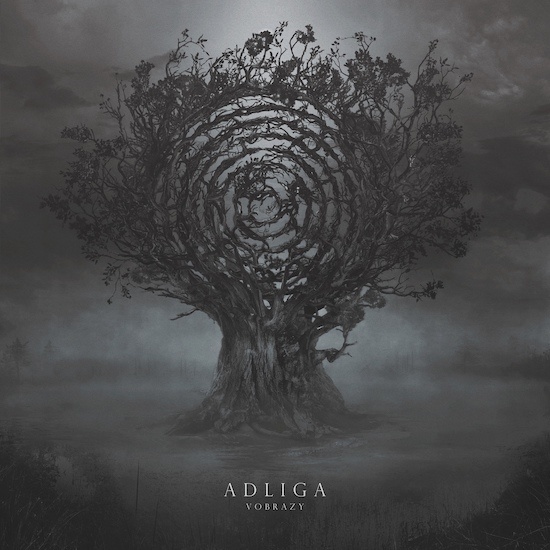 Today it is our pleasure to present a striking video for a powerful song off the forthcoming debut album by the band Adliga from Minsk, Belarus. The album, Vobrazy (set for release on November 5th), features six songs with lyrics in the Belarusian language, some based on Belarusian folklore, and in their music the band interweave elements of doom and post-metal with vocals that exhibit great variety and range.

The song featured in the video we’re premiering is “Žyvy” (Alive). Its lyrics narrate a horrible dream, in which all life has been extinguished, the earth laid waste in blood and fire, and the observer struggles to make sense of how to exist. The narrative, which includes ruminations about destiny, ends with these words, translated from the Belarusian:

Here you are alone, and your life is at stake.
Death’s call has sounded,
This round you’ve almost lost

And clenching my teeth,
And pulse beats in temple,
Only one thought – I’m alive!
Alive!
Alive!

The song itself is heavy and harrowing, beguiling and haunting, and a powerful representation of both vast calamity and inner turmoil. It’s a match for the grievous intensity of the lyrics.

The song opens with raking chords, screaming leads, punishing drums, and harsh howls (by rhythm guitarist Uladzimir Burylau). The aggressive opening gives way to sorrow, expressed through the heartfelt singing of vocalist Kate Sidelova amidst somber and shimmering guitars and a humming bass. Her voice is a transfixing presence, and hints of her range come through as it becomes more gritty and searing.

The music builds again in intensity, becoming feverish and anguished. Exotic, serpentine, and pulsating melodies create a sense of mystery and wonder in the midst of tumbling and hammering drums. Backed by chiming guitars, Kate Sidelova sings again in a voice that seems to convey gloomy resignation. The guitars soar and swirl, climbing again to a pinnacle of sweeping intensity, creating a feeling of apocalyptic splendor and pain. As the music reaches that summit Sidelova reveals her capacity to expel the lyrics in wrenching screams. In listening to that finale, heads will move, and be haunted.

The beautifully executed video, set in shades of light and darkness, allows us to see the band performing (including lead guitarist Ignat Pomazkov (Bizarrekult), session bassist Dmitry Yarmola, and drummer Artem Voronko, in addition to the two other afore-mentioned performers), but also includes an interpretive dance performance by a pale figure who seems to represent the tortured observer in the song’s lyrical narrative.

Vobrazy was recorded and engineered at Everest Studio in Minsk by Pavel Sinilo. It was mixed and mastered by Magnus Lindberg (Cult of Luna, Tribulation, etc.) at Redmount Studios. The cover art was created by Ivan Gladkikh (Bizarrekult, Wowod, Supruga).

The album will be released on CD via Wroth Emitter, and on MC and digital by Adliga.