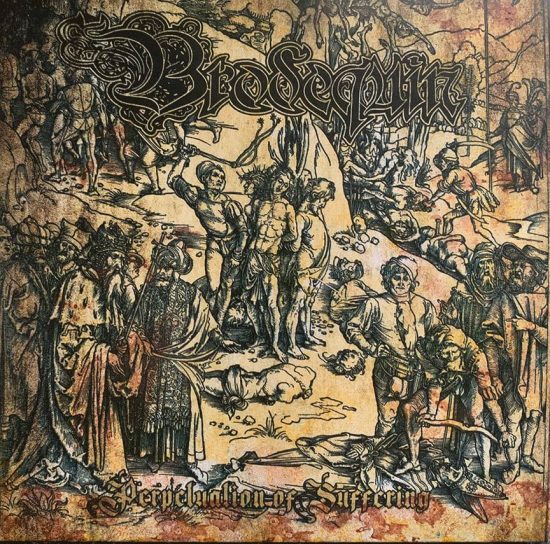 (Karina Noctum brings us this new interview of Jamie Bailey from the Tennessee brutal death metal band Brodequin, whose new EP Perpetuation of Suffering was released at the end of August 2021 by Unmatched Brutality Records.)

I discovered Brodequin pretty early when I started listening to metal as a child because I was pretty impressed by impossibly fast tempos and looked specifically for the most extreme music I could find. It was awesome to get to to see the band live and active again some years ago. Now recently they released their latest EP Perpetuation of Suffering after a long hiatus. The EP has a bit more slammy parts, but just enough, and it’s highly enjoyable. I’m really glad I had the opportunity to interview Jamie Bailey and talk about the EP, his label Unmatched Brutality, and what’s to come for Brodequin.

I loved the EP. When did you start writing it?

Thank you! We have been working on a lot of material for about 2 years. These tracks we have had for about a year, maybe a little less. We selected these as we felt they were a good representation of how we’ve been moving in respect to the writing style.

Tell us about the producer? Will he be working with you the future?

We have known Josh Welshman for a number of years; most would associate him as the vocalist of DEFEATED SANITY and rightly so. We all know him from different perspectives although we have seen him perform or performed with DEFEATED SANITY on festivals. Brennan had worked with him in the past and he was already on our radar as a guy we wanted to work with. When the time came for his expertise, he was willing and able to be a part of the project.

He has a great ear for music in general and really could appreciate what we were trying to accomplish in relation to the “sound” we were interested in. He is also a fan of the band as we are with DS, so he came at it from a different angle, not just a guy behind a board mixing some band. He knew what he would have liked to hear from our previous releases and brought those ideas to the table. I don’t think there was a single suggestion he made that we disagreed with. We definitely plan on working with him in the future and I suggest others have a look his way when they need this type of work completed.

What are the lyrics in the songs of the new EP based on? Is it a continuation of the lyrical themes from the past albums?

Yes the lyrical themes are based off our favorite historical topics, torture and execution. “VII Nails” is based off a method of driving nails into the jaw of a suspected witch. The thought is if the jaw is forced shut, the witch will not be able to curse her torturers, captors, or whoever turned her into the authorities, etc. This songs covers the imprisonment, torture, and ultimately premature burial of the accused.

The second track is entitled “Tenaillement“, a French word for torture by pincers. Tenaillement appears in an old text I have specifically dealing with torture and executions throughout France. I was familiar with the technique of red hot pincers as they were used in many locations, but I was drawn to the sound of this word. I had a friend of mine in France properly pronounce it for me, and I found it to be kind of a pleasant sounding word for such a brutal action. So, I decided to write the lyrics purely from what I had read about the French use of this technique, which is similar with a few additions to the way many used it throughout Europe.

I know there are many who aren’t interested in lyrics, but to me they are a vital part of the story or information about the times we are presenting. I’m personally always interested in lyrics from bands, as to me it speaks about their identity. If there’s no lyrics why have song titles? What can the song possibly be about? haha

I think so; it’s a good example of what’s to come. Of course there are some differences in the other songs, faster or slower depending on what we are trying to express. The overall brutality is evident in all the new material we have completed so far. There are 10 new songs including the 2 on the Perpetuation of Suffering EP. All the lyrics, music and images follow the same feeling we have used in the past.

In which ways do you think your playing has evolved from the last album to what you are releasing now?

I think this is the next step from our last album Methods of Execution; we were drifting into this territory already. I don’t want to say the riffs are easier, but they are more complete in the way they are written. Maybe a little less chaotic but not in a way that lessens the severity. It’s important to us to allow the music to breathe a little bit. What I mean by that is if we play a piece we really like, we want to bring it back around, not just play it once and that’s it.

If you are planning on releasing a new album then, when do you think this will be done?

It will be in 2022, not sure exactly the month of the release as there are a few things that may influence that.

Have you written enough material for it yet or are you in the process of writing it?

We have enough material at the moment for the album; of course something could come up and be added. It’s entirely possible that a new song could be written and either included on the album or used to replace one of the current songs that we are planning to include on the album.

Do you compose often and then pick the best songs? How does the composition process go for you?

So I know we all do it a little bit differently but generally it goes something like this: Maybe I have a handful of riff ideas or a basic song structure in mind. I take the material to Mike and we sit down and start working on it and he takes my very rough ideas and polishes them into what they ultimately become. Or perhaps Mike has some ideas and we do the same thing except starting with his base and then crafting around that point. Mike also writes a lot of the drum sections and had everything written for all the new material. Now of course, we encourage Brennan to make any necessary changes and additions to the parts Mike wrote, but in a lot of cases the parts are very similar. At the very least, as we were writing, it gave Mike and me an idea of kind of how it “should” sound. All the changes Brennan has made have been very tasteful and only enhanced the overall feel; he has a great ear and is a very talented individual.

You got a new drummer in this EP, Brennan Shackleford. How does his drumming fit Brodequin? What new elements does he bring to the band?

So I was aware of Brennan a few years ago, as he did a cover of “Flow of Maggots” that I saw on YouTube. At that point I was watching to see what all he was doing and was involved with. When it became apparent that we were going to need to make a personnel change he was the first name on my list. Brennan is a great mix of the drummers from our previous albums, Chad Walls and Jon Engman respectively. Equally important he is not just trying to clone what they have done. He’s got a great sense of how his skills will fit a given song and how his strengths will improve a certain section for example. Not only does he have the speed, he has a great percussionist skill set that allows him to dig deeper into the musical elements of the song and bring out highlights where they may not have been previously.

How difficult was it to find drummers for a band like Brodequin?

Very. In fact we never planned on advertising, so to speak, that we were in search of a drummer. Instead choosing to do all the research ourselves and see who was out there. Brennan was the first name on a very short list, and several people were referring him to me. It was kind of of funny how several people from all around the globe were suggesting Brennan might be the guy for the job. I would kindly respond, thank them for their suggestion, and agree with them.

I really like your label Unmatched Brutality. There’s a wide selection of pretty brutal bands from scenes all over the world. How do bands get signed on the label? Do the bands get selected and contacted or do they send promos and get chosen?

Thank you! Basically bands can submit anything to brodequintn@gmail.com. Of course we can’t sign everyone and there have been lots of delays with current bands due to Covid, issues with the supply chain and delays at CD manufacturing locations. In some cases bands have been referred to us by other bands and so on, and there have been a couple instances where we sought bands out. For the most part the bands are chosen because they submitted material, and we liked it. Its also important to note that we have passed on bands we like due to scheduling issues etc. If we know we have a long line of releases that are getting started its not fair to have a band wait if their album is ready to go. And we tell them so, so they have a chance to take it somewhere else where it may be released sooner.

Which bands do you recommend us to check out?

The amount of bands out there is staggering, with more and more every day. I almost always fall behind on what is new and fresh in the scene and find about them after the fact. Of course there are a few new bands and not so new bands on Unmatched Brutality such as NEPHILIM GRINDER, DECARABION, REVILED and CADAVORACITY. In addition, THE HERETICS FORK, INFERNAL COIL & BASOPHILIC SCHLEROSIS are all worth looking into if you haven’t heard them, each bring their own version of brutality.

I attended many Brodequin shows when you toured Europe last time, and the most special one was the very last Monthly Assault in Switzerland. Do you have any plans to tour Europe again whenever restrictions lift?

The Monthly Assault was a fantastic show and we were really happy to be part of it! We are always interested in Europe and playing in familiar and brand new locations. There has been a little talk about something in 2022 most likely in the summer, but I don’t want to say much as it’s still very early in the talks. If it were to happen there would be several places included we have never been to before, which is really exciting.

Any shows planned in the future in the US and elsewhere?

So far with all the craziness and restrictions the only show we have officially lined up is the California Deathfest in January 2021. As things start getting back to the way they were, we are hoping to get back to South America, Europe, and possibly parts of Asia for the first time.