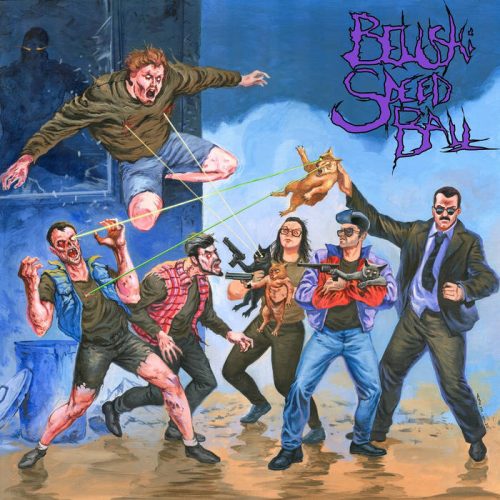 As we all know, social media can become a cesspool of sarcasm, ignorance, and meanness. Most of the time, when you find yourself in the cesspool, the wise course is to stay silent and leave as fast as you can. The Kentucky band Belushi Speed Ball didn’t follow that advice, but instead used the nastiness as an inspiration.

This might not be a good long-term creative strategy, but it worked out pretty well in the case of the song that’s the basis for the video we’re premiering today. And it’s in keeping with the unorthodox (and sometimes absurdist) aesthetics of this crossover thrash band, who seem to revel in thumbing their noses at conformity.

For example, although I’ve never witnessed one of their live performances, I thoroughly enjoyed this evocative excerpt from a write-up in Louisville’s Leo Weekly: “Watching a Belushi Speed Ball show is a lot like going to a pro wrestling event. There are costumes, outlandish characters and antics, raw energy and the key ingredient: an involved audience.” 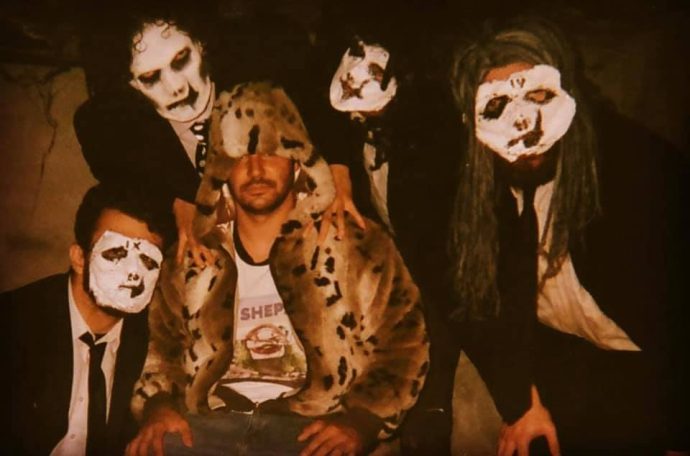 To return to the song in today’s video, it was inspired by a comment about them left on YouTube, an empty and cliched accusation that the band chose (with tongue in cheek) to embrace. But there’s still a point to this musical riposte besides humor.

And now, on to the music: It’s a turbocharged assault of crazed and contagious thrashing mayhem, packed with flashing fleet-fingered fretwork, pugilistic rhythms, and raw, furious, screaming — with a finale in which the band sing the chorus in a pop-punk style, complete with generic “whoas”. And even that’s catchy too.

The video, directed by Beau Kaelin, is as much of a wild and bamboozling riot as the music, and that’s all the preview we’ll give you about it.

This isn’t the first video Belushi Speed Ball has released for this same song. Nine months ago they put out an animated lyric video for it, which you’ll find further down this page. As explained by guitarist/vocalist Vinny at the time:

“Gatekeeping invariably exists within every music scene, and the less a band fits the scene’s unspoken criteria, the more closed doors it encounters. The music video then pokes fun at what it often takes to open a door – at a choice that many bands make to achieve some perceived level of success. Specifically, Belushi Speed Ball endures a pact that sacrifices their identity in exchange for an ambiguous promise of popularity, a deal that is not made with the Devil, but rather with a collective of homogenized copycats.”

The song originally appeared as a track on a January 2021 double-EP entitled Stella 1 and Stella 2, which was presented swaddled in a literal tapestry, which included an informational VHS tape about the tapestry’s significance. This particular song was also released on a dunkable cookie. Because of course it was.

Through Bandcamp, the double-EP is still available digitally, on double-CD (with or without tapestry swaddling), and on glow-in-the-dark 12″ vinyl. We’ve included a stream of the whole thing below. It was mixed and recorded by Chase Bensing and it was mastered by Joel Grind.