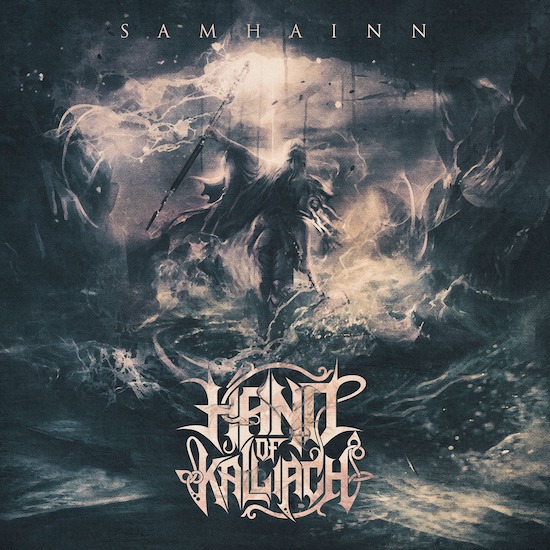 What we have for you today is a beautiful lyric video for a fascinating and intensely gripping song by an equally fascinating and gripping Scottish band. That band, the husband-and-wife duo of Sophie and John Fraser, chose for themselves the name Hand of Kalliach. We’re told that the name comes from the legend of the ‘Cailleach’, “a Scottish witch god of winter – and in mythology one tale holds that she sleeps at the bottom of an enormous whirlpool in Corryvreckan, off the western isles of Scotland where John’s family is from, arising to usher in winter”.

As you might have already guessed, Hand of Kalliach draw upon from the folklore, history, landscapes, and seascapes of the Scottish islands, and they characterize their music as “Atmospheric Celtic Metal”. But instead of using traditional instruments they draw inspiration from the rhythms, time signatures and patterns used in folk music and adapt them for distorted guitars and other familiar metal instrumentation.

The particular song we’re presenting today is the third track on the band’s forthcoming debut album, Samhainn, named after the ancient Celtic festival of winter (and pronounced ‘Sah-win’). The title of the song is “Each Uisge” (roughly pronounced eyach oosh-keh) and it translates to ‘water horse’. Therein lies the tale of the track…. 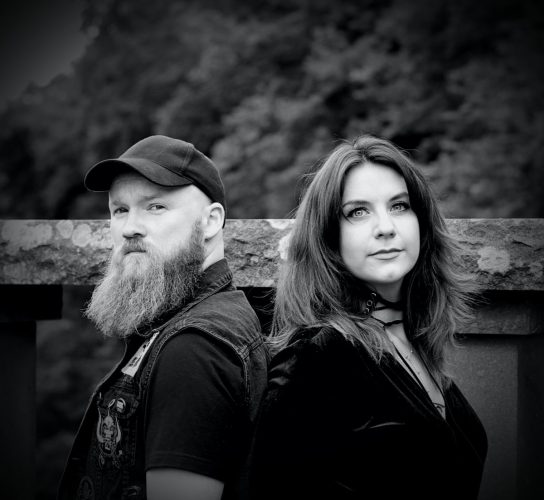 The band explain: “Each Uisge is a demon from Scottish mythology that disguises itself as a horse before binding its flesh to a rider and galloping into the sea to drown and devour them. The story in the track is about a shipwrecked sailor following a siren voice to find an Each Uisge, and then charts his demise as he desperately mounts up and realises his mistake too late”.

In keeping with this tale, the song itself is a harrowing narrative, and a kind of dialogue between the two protagonists — the deceptive demon and the doomed sailor who realizes his fatal error too late. In achieving this portrayal in sound, the song is both ethereal and viscerally ravaging, both mystical and ruinous.

Sophie Fraser‘s crystalline voice expresses the siren-like beckoning of the water horse, an enticing promise of succor from worldly cares — a comfort that turns out to be death. And in doing so, she gives voice to a melody that is also irresistibly beguiling. By contrast, John Fraser‘s savage growl captures the intensity of the danger experienced by the sailor under the onslaught of the ocean storm, and the rage and regret that comes from his realization of the impending extinction that looms within the spell to which he has fallen prey.

Around the vocals, the music itself storms and rages, discharging thunderous drumming and dense, scathing, feverish riffage laced with shrill, fiery, electrifying arpeggios that enhance the feeling of frantic flailing within the storm. By contrast, the mysticism in the music comes through in light ringing tones and brilliantly swirling keys that lead the music to a soaring, pulse-pounding crescendo.

The striking cover art for Samhainn was created by VHummel. The album will be released in CD and digital formats through Trepanation Recordings, and will be available on streaming services, on October 22nd. It’s recommended for fans of Primordial, Oceans Of Slumber, and Ihsahn. Below you’ll find relevant links and a stream of three other previously released songs from Samhainn.