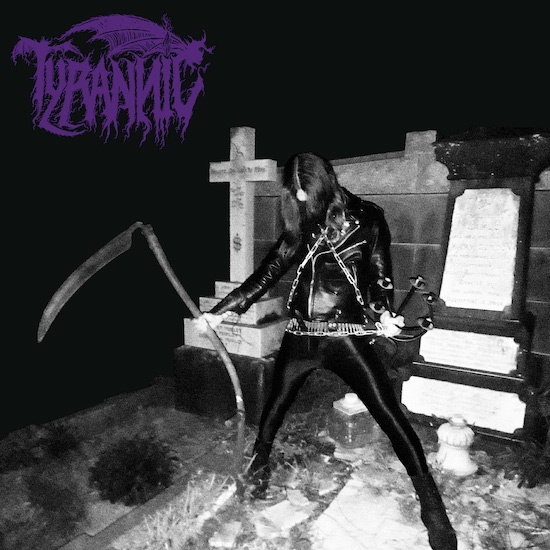 The Australian band Tyrannic have already established themselves as a weird and wild force to be reckoned with, harnessing together elements of classic doom and savage black metal, but not really beholden to any genre constraints in their haunting and harrowing explorations of Death and what lies beyond. Yet what they’ve achieved on their forthcoming second album Mortuus Decadence is nevertheless a fierce and frightening leap forward from what they’ve done before.

As absolutely vivid proof of this, we present today the premiere of “Singe of Orgiastic Waste“, a song whose name may be confounding before you listen to it, but then begins to make horrifying sense as it spills its demon seed. In a nutshell, the track is a startling collage of calamity, a changing rendition of downfall, degradation, and derangement. 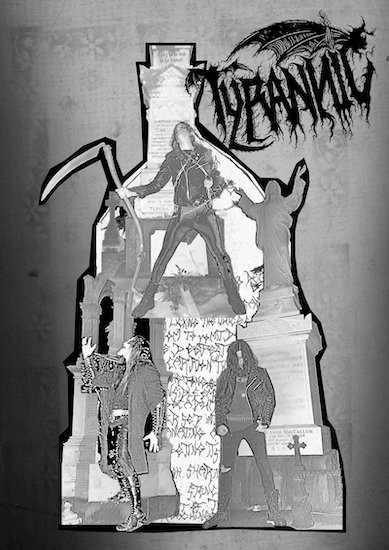 The song begins in a way that provides no dependable clue about what will ultimately happen, exposing the listener at first to dismal, morbid riffing, methodically pounding drums, and a gripping call-and-response between quavering gothic wails and ugly, bestial growls.

The fever of swirling spectral tones provides a foreshadowing of what’s to come, and what comes is increasing mania, beginning with jolting and whining guitars and rambunctious drumming, capped by the most maniacal solo you could imagine. That unhinged convulsion (which includes unhinged vocal intensity) leads into blaring chords of infernal grandeur and frenzied bursts of battering and slashing violence, wild sky-high vocals, and utterly vicious howls — plus one last orgiastic paroxysm of murderous mayhem, all screaming guitars, clobbering percussion, and maelstrom riffing.

The bizarre and electrifying twists and turns of the song are something you should embrace if you follow the band through the rest of the album, because steadiness and predictability are apparently anathema to Tyrannic‘s diabolical creative impulses. They follow their own twisted and transfixing path through every song, and the wide-eyed thrill comes from just hanging on for dear life, sanity be damned.

If you need further evidence of this, partake of the album’s title track, a stream of which we’ve installed below.

Mortuus Decadence has been set for release by Iron Bonehead Productions (LP vinyl) and Seance Records (CD) on November 19th, and it comes recommended for fans of old Mortuary Drape, Root, Hungary’s Tormentor, Barathrum, Brazilian iconoclasts like Impurity and Sextrash, or even very earliest Mayhem.

And to learn more about the history and ethos of Tyrannic, we invite you to read Comrade Aleks‘ 2019 interview of the band’s founder, drummer, and vocalist here.