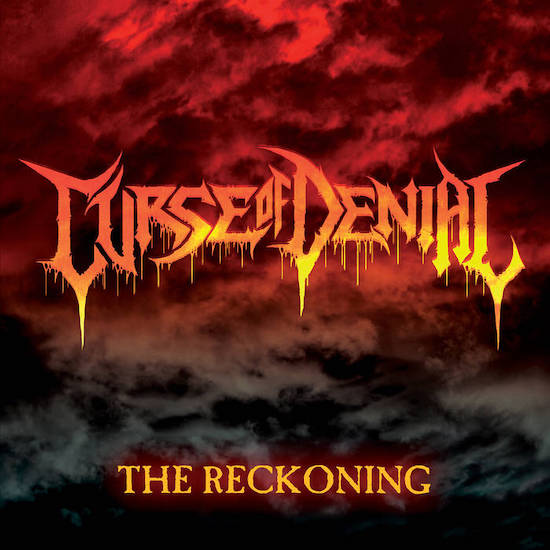 We’ve had the thrill of premiering the music of Cleveland’s Curse of Denial on previous occasions, helping to spread the word about the band’s 2017 debut album The 13th Sign (which included appearances from underground Cleveland mainstays such as Nunslaughter, Embalmer, Decrepit, From the Depths, Ringworm, and Keelhaul) as well as their 2019 full-length follow-up, Coming For Your Soul. And thus we jumped at the chance to do it again today.

This time the music comes from a new EP named The Reckoning, which is set for a November 12 release by Redefining Darkness Records.

If this happens to be your first encounter with Curse of Denial, its line-up is made from veteran talent consisting of powerhouse vocalist Rob Molzan (ex-Decrepit and From the Depths), plus three musicians who shared time in the instrumental metal band Pawns In Chess, two of whom were also members of Descend — bassist Michael Perez, drummer Shawn Hapney, and guitarist Jeremy McLellon. 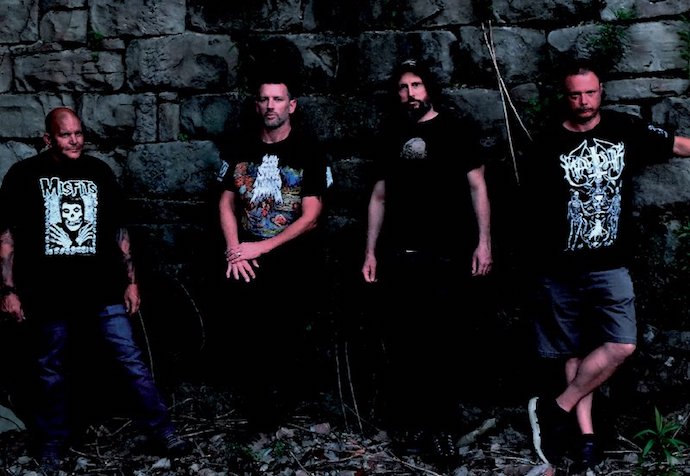 The fury in the new music is explosive — aligning with the subject matter of the music. The band describe “Variant“, the intense song we’re presenting today, in these words: “It’s about how the mismanagement of SARS-CoV-2 by politicians and the media have cost the world so many more lives to be lost in addition to the disease itself. By blindly following politicians and media figures, many lives have been impacted in such a terrible way that it has lead to additiction, domestic violence and death.”

Imagine a maniacal swarm of flesh-eating insects (or body-ruining viral agents, or gullible minds fueled by conspiracy theories), driven to lethal frenzies under the command of imperious abyssal growls which sound no less carnivorous, and the rabid snapping convulsions of a percussive assault. That might give you some sense of the madness channeled by the way “Variant” begins, but the dynamism of the song makes it swerve in other equally harrowing directions. Without warning the blistering speed and fury of the song switches into a kind of darting wildness, and then a semblance of staggering and ominous grandeur, with those horrifying gutturals joined by berserk, terrifying screams, macabre roars, and menacing spoken words.

It’s both a horrific and an electrifying amalgam of experiences, one that’s cut short all too soon. The impulse to run it again is formidable, if only to better wrap your head around just what happened.


The new EP includes four more songs and a total of nearly 20 minutes of music. Pre-orders are open today: