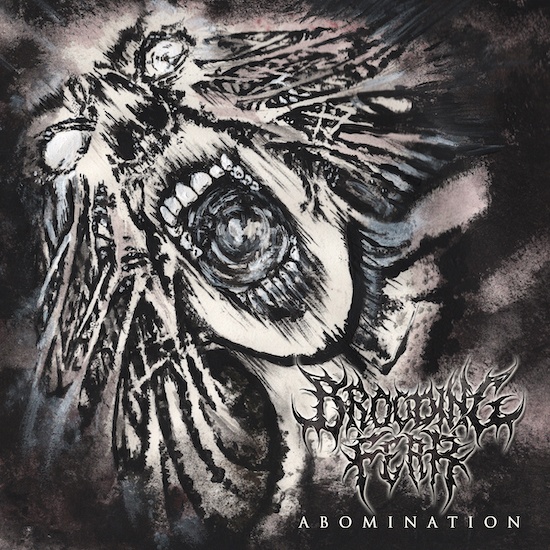 We’re about to give you a gift of thrills, the kind of full-throttle, head-spinning spectacle that comes with our occasional warning to take plenty of deep breaths before you press Play.

The song is “Scorn“, and it does indeed have a vicious, clobbering, and condemnatory intensity, but it’s also absolutely wild, and guaranteed to light a fire under your nerves. It’s the work of a part-Dutch, part-Hungarian band of technically jaw-dropping death metal marauders who’ve taken the name Brooding Fear. It comes from their explosive new release, Abomination, which will be detonated by Ungodly Ruins Productions on December 3rd.

Take a good look at the wild, savage cover art for Abomination, because it provides a further big clue as to what’s coming. 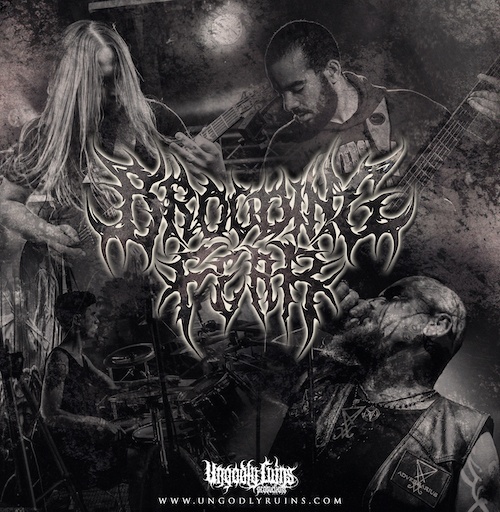 At the outset of “Scorn” grand blasts of melody quickly create a mood of cruel imperious menace over frenzied drum bursts. Those blaring fanfare blasts of sound continue throughout the song, but what happens around them generates enough electrification to power a large city – beginning with a gloriously swirling guitar solo and extending through eruptions of frantic scissoring fretwork, additional mind-warping solos, and spurts of shrieking, swarming, and jolting riffage.

Meanwhile, the rhythm section puts on its own electrifying show, with the bass barbarically pummeling and the drums rapidly ejecting a multitude of double-bass assaults, spine-snapping snare-bullets, methodical militaristic cracks, and episodes of start-stop bludgeoning. To cap off this brutal yet mind-boggling adrenaline rush, the vocals veer as well, ranging from voracious growls to berserker screams.

The album was mixed and mastered at Red Pack Productions. That eye-grabbing and evocative cover art is the work of Odium Artworks. Ungodly Ruins will release the album on CD and digital formats, and pre-orders are available now: