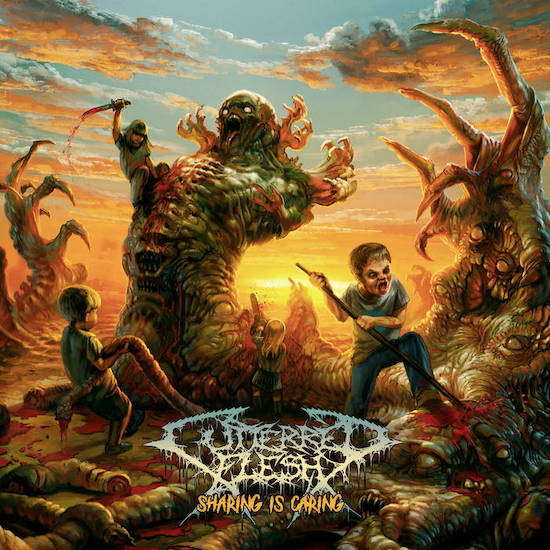 The video we’re about to present shows us… how shall we say it?… an interesting household. A seemingly innocent little boy and his pet rabbit. An abusive mother who doesn’t realize where her rages are going to lead. And in the living room, a bunch of death metal barbarians turning the humble surroundings into a psychotic war zone.

Oh yes, it’s an interesting video, with blood spatter in its future. And it makes an attention-riveting companion to the absolutely bludgeoning and eviscerating song “Good Boy” that it presents — a bombastic, mind-mauling, and terrifically brutalizing track by the Czech death metal band Cutterred Flesh.

Adorned by the macabre cover art of Par Olofsson, which itself features a couple of “good boys”, the album that includes this track will be released by Transcending Obscurity Records on December 3rd. 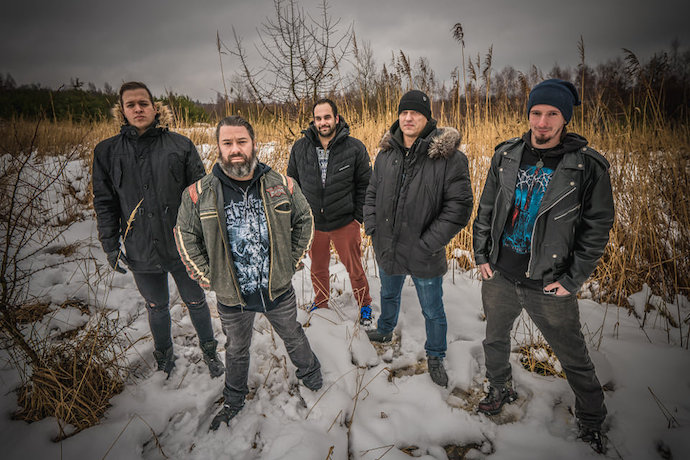 “Good Boy” includes a guest appearance by Von Young from the long-running brutal death metal band Lividity, for extra slaughtering. Not that the song needed extra slaughtering, because it’s a remorseless piece of thuggery and butchery in every other way — from the clanging crowbar chords to the bullet-spitting drums, from the maniacally seething, swarming, and slashing riffage to the cacophony of mighty bellows and crazed howls in the vocal department.

Yet there’s more going on in the song than rampant bone-smashing and dismemberment. Eerie tendrils of wailing melody radiate through the assault. Tempos shift sharply. Bursts of fleet-fingered fretwork come without warning.The music keeps you on your toes, even as it lops off limbs and fractures necks.

And you do have to appreciate the sense of humor revealed in the song title — and in the name of the album: Sharing Is Caring.

Transcending Obscurity recommends the album for fans of: Godless Truth, Monument Of Misanthropy, Depravity, Suffocation, Devourment, Aborted, Cattle Decapitation, Benighted, Vulvectomy, and Analepsy. As usual, the label is offering it in a variety of formats, with apparel, that you can explore via the links below. You can also explore (and be beaten senseless by) three previously released tracks via the Bandcamp player that comes next.