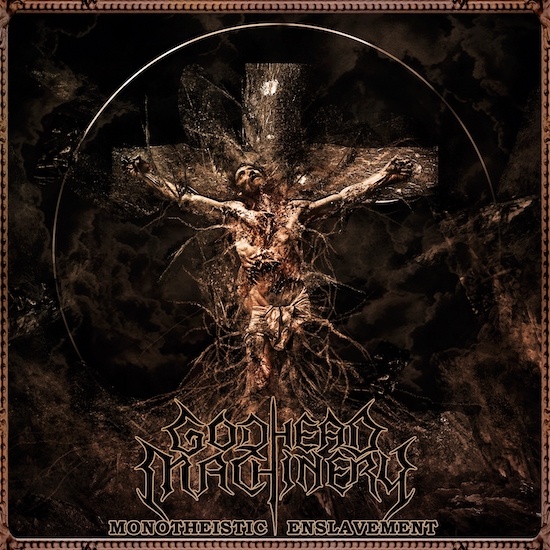 In tale June of this year we premiered and reviewed an EP by the Swedish band Godhead Machinery named Masquerade Among Gods, which added to a discography that then included two full-lengths, Ouroboros (2017) and Aligned to the Grid (2019). We offered these thoughts about it (among many others):

“Through the four songs on this EP, when absorbed straight through, Godhead Machinery have created a truly harrowing and haunting experience. The music is multi-faceted and intricate, revealing (in the simplest of genre terms) an amalgamation of black, death, doom, and progressive metal that’s capable of generating visions of frightening calamity, earth-shaking upheaval, and terrible grandeur, but also casting mesmerizing spells and plunging the listener into moods of soul-shaking sorrow”.

Conceptually, the EP was connected to a then-upcoming album, both of them spawned from what the band stands for in general, which is to serve as “a tool to analyze how religious beliefs infiltrate laws, policy, behaviors, and moral codes of today’s society”. Now that album is fast approaching its November 26 release by Black Lion Records. The album’s name is Monotheistic Enslavement, and today you’ll have the opportunity to experience all of its tremendous power. 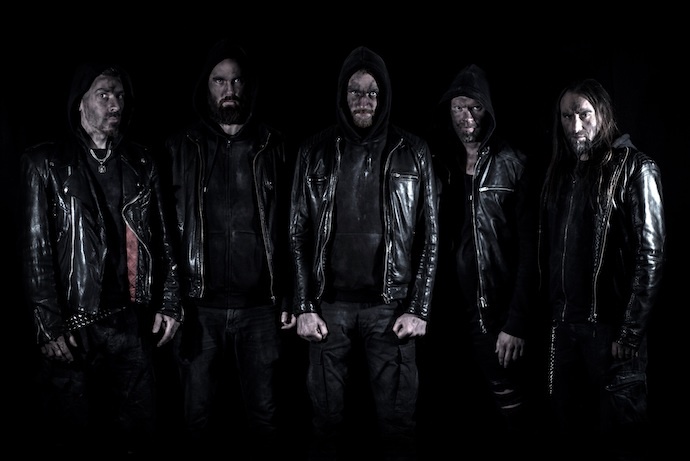 Similar to the recent EP, the new album is a multi-faceted experience. One of its signal qualities is just how frightening it is. The band create sensations of growing tension, fear, and calamity through searing, dissonant riffs, unhinged howls, belly-deep growls, wrenching yells, plundering bass upheavals, and spine-snapping, skull-crushing drumwork. Skin-chilling wails, coupled the gleam of cold, ethereal melodies, lend the music an otherworldly atmosphere that enhances its fearsome aura, as if the intense peril we feel is coming from dimensions outside the one we live in.

The visceral, soul-shuddering impact of the music derives from other qualities besides its megawatt fear factor. The melodies that course through the songs create sensations of deep dread, abject despair, and crushing misery. In doing this, at times the guitars peal like mind-scarring bells, at others they become feverish conflagrations or generate trilling laments. Riveting guitar solos emerge, slithering and swirling, at times stricken with grief and at others brilliantly incandescent. Occasional acoustic guitar interludes provide reprieves from the pitch-black intensity, but even those don’t offer comfort.

In its relentless pursuit of darkness, the album also erects towering obsidian monuments. The music soars in displays of vast, hostile grandeur or grand-scale tragedy, sometimes enhanced by solemn chants. The band also inflict severe, bone-smashing punishment in bursts of pile-driving or stomping heaviness and eruptions of blistering mayhem.

Perhaps unexpectedly, in light of what you’ve read so far, there are passages in these songs that also prove to be entrancing. Even though the spells are unsettling (in line with everything else), they’re nonetheless captivating.

Finally, the album benefits from a balanced mix and relative clarity for such metallic extremity, and those qualities are well-suited to the elaborate and evolving nature of the compositions. You can hear everything that’s happening, and how all the piercing ingredients interact to produce such a perpetually gripping album experience. And yes, it really is thoroughly gripping — it gets your throat in its talons right away and then never lets go.

Godhead Machinery was started in 2014 by Kail Karlsson (formerly in the Swedish black metal band Misericordia), and since 2017 has featured a complete line-up that now also includes vocalist Niklas Ekwall, guitarist Tommy Ericson, and bassist Daniel Forsberg, along with session drummer Krzysztof Klingbein (of Vader).