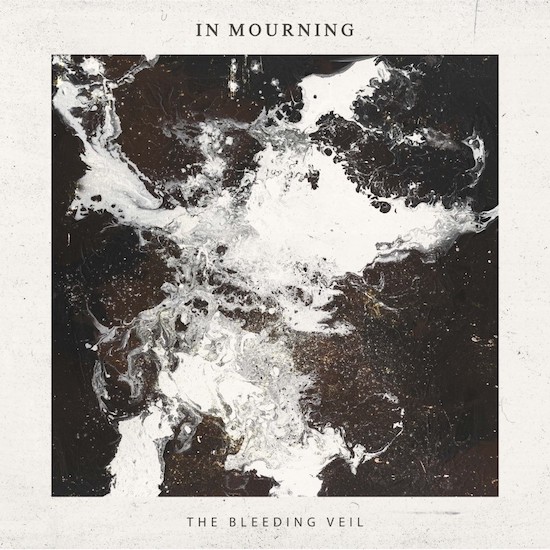 (DGR prepared the following review of the new album by the Swedish band In Mourning, just released on November 26th.)

In Mourning have definitely found a sound since the heady days of 2012 and their release of The Weight Of Oceans. Creating their own loosely conceptual lyrical universe, that album laid the groundwork for just about every release of In Mourning that followed it. While early works in the band’s discography would land them on the radar of prog-death fans – and I will go to bat for Monolith being an absolutely fantastic and underrated release – The Weight Of Oceans and its doom and post-metal influences would be where In Mourning would stake their claim.

Both 2016’s Afterglow and 2019’s Garden Of Storms continued along that path, acting as extensions of that musical world, sometimes wandering down a more death metal oriented path and sometimes going full avant-garde, as Garden Of Storms would reach its tendrils into every crevice it found. Now firmly ensconced in their corner of the progressive death metal world and with an even smaller gap between releases, In Mourning are with us once again with The Bleeding Veil, the group’s sixth full-length and the third release so far to contain seven songs in its track list.

Given that the throughline of The Bleeding Veil and its two most recent siblings is so similar, it’s interesting to see what paths In Mourning have decided to chart this time around. The Bleeding Veil is In Mourning in full focusing mode, as the disc takes all of the different directions that Garden Of Storms shot out and hones them down, refining them into a much more tied and tighter release. 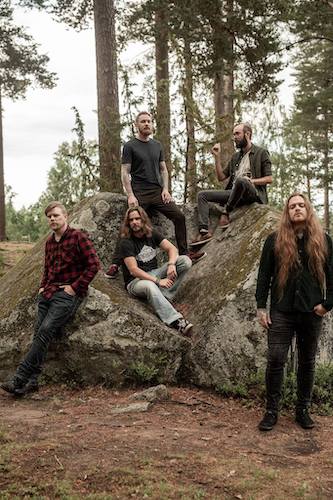 In Mourning have become quite painterly with their music. It’s hard not to listen to this new record and walk away from it without it feeling texturally lush. The band have three guitarists in their lineup and make full usage of them, with the more traditional rhythm/lead dynamic often giving way to little hidden melodies or even combining all three to really highlight a specific line or atmosphere that the band want to amplify.

Over the years In Mourning have absorbed a variety of influences into their sound as well, which is why so much of The Bleeding Veil feels like it is taking its cue from Garden Of Storms. That album was them taking every lesson and sound that worked for them from previous releases and mixing them altogether into the pinkish-hue that became that disc’s sound. You could have some absolutely gorgeous moments alongside segments that recalled earlier works and angular riffs that would blindside you as well, which made it a very interesting way to spend fifty-minutes. It is probably the most expansive of In Mourning‘s discs so far, with The Bleeding Veil refining it so that everything within ambit ties together much more neatly.

The album opens incredibly strong with “Sovereign”. For a band that early on drew a lot of comparisons to Opeth, it’s fun to hear them playing in a similar sandbox as one of Opeth’s more death metal moments in that heavier intro-segment for the song. From there, “Sovereign” branches into a variety of different territories and does so with the sort of deftness of a band that have done this for a while.

Six of the seven songs sail over the six-minute mark with ease and for the most part do so without any of them feeling like they’re getting long in the tooth. Each is a sort of journey through the different scenes In Mourning choose to paint, filled with as much melodrama as there is a sort of genuine beauty in some of the cold atmospheres that they’ve used over the years. The guitar solo section in ‘Sovereign” is absolutely gorgeous as a result and one of the moments early on that clues you in that nearly every song on The Bleeding Veil will have a jaw-dropper like that. Even this many years on into their career, In Mourning still have the sort of musical poetry that led to giant lyrical scrawls like those that made up Monolith and Shrouded Divine as part of the repetoire.

While “Sovereign” may have the unenviable job of being the ‘welcome back’ and introduction to the new disc – thus combining a whole bunch of ideas while still sounding like it could’ve picked up right where Garden Of Storms left of – The Bleeding Veil carries forward some of that serious momentum with the much slimmer five minutes of “At The Behest Of Night”. “At The Behest Of The Night” is easily an early album highlight (on a disc full of them though) and one that actually has a lot of shades of the much – personally – beloved Monolith style of songwriting. Nearly every moment is great. The clean-sung chorus is the sort that makes you jealous that you don’t have a voice like that; the heavy segments are wonderful; and each of the leads in that song are likely to scratch marks into your brain that’ll last for some time. It is one of those songs where all the way up to its closing you can recognize why it was one of the two so far to get a music video.

Almost every song on The Bleeding Veil seems to have a twin later on in the album, where ideas from some songs worm their way into others, whether it be the stuttering riff work of “Solitude And Silence” re-asserting itself in the opening of closing song “Beyond Thunder”, or “Lights On The Mire” becoming another heavy exploration into the progressive death metal world in the same way “Sovereign” was before it. It starts to sound like The Bleeding Veil is cycling inward on itself, even the way “Blood In The Furrows” carries shades of the aforementioned excellence of “At The Behest Of Night” — and yes, those two being the most reminiscent of the group’s earlier works doesn’t hurt one bit either.

That really just leaves an odd one out in the singular “Thornwalker”, which is a masterclass in their style of post-metal crashing headlong into their moodier melodeath moments, allowing both of the band’s vocalists to just howl away as Joakim Standberg Nilsson blasts the drum kit into pieces. They do it a couple of times throughout “Thornwalker”, and honestly, they’re great moments each time.

Every In Mourning album has been pretty great in a general sense. They’re a band who’ve slowly built up a lot of steam over the course of their career, and the acclaim is wholly justified. Each disc has been a journey of its own and while they’ve definitely found themselves a format over the last few records, they’ve still been different enough from one another to not just feel like the same thing being rehashed over and over. The Bleeding Veil in particular feels like it is going to have a lot of staying power. As mentioned, it’s a lot more focused and singular than previous albums, and maybe the smaller gap between releases was actually good for In Mourning this time around, because within the forty-five minutes of music here, some of the tracks have a sense of frenetic urgency to them that previous records were more happy to just drift through soundscapes with.

While it’s hard to lavish an accolade like ‘it’s the bands best work!’ or anything similar on something so new, it’s been a very long time since one of their releases has made an immediate and impactful impression, which is what The Bleeding Veil has done. It carries shades of a lot of its forebears throughout its seven songs but it’s also adventurous enough that it’s still an organic evolution of their sound.