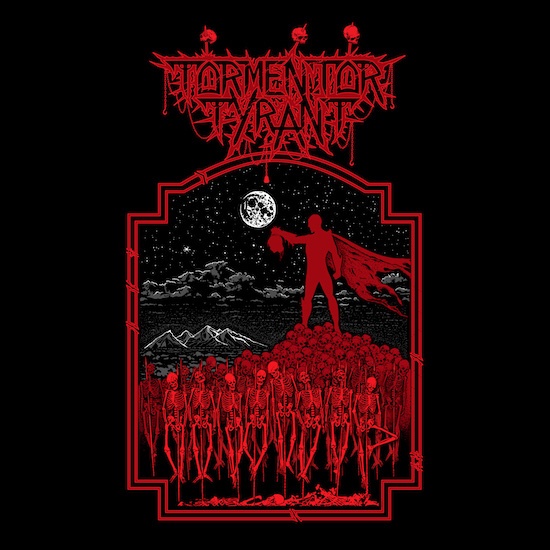 The tale of Tormentor Tyrant‘s inception points the way toward the kind of evil death metal they’ve laid down on their debut self-titled EP. We’re told that the band was born in late 2020, but that the seeds of the idea might be traced back even a few years earlier “to some obscure drunken nights when the trio had the innocent idea of ‘how cool would it be to just jam some early Deicide songs together?'”

And hell yes, what they’ve made is thoroughly evil — death metal that’s grimy, grotesque, untamed, and savagely primal in its sound. We’ve got a great example of their formidable talents in a song off their forthcoming EP that’s fittingly named “Primal Evil“. 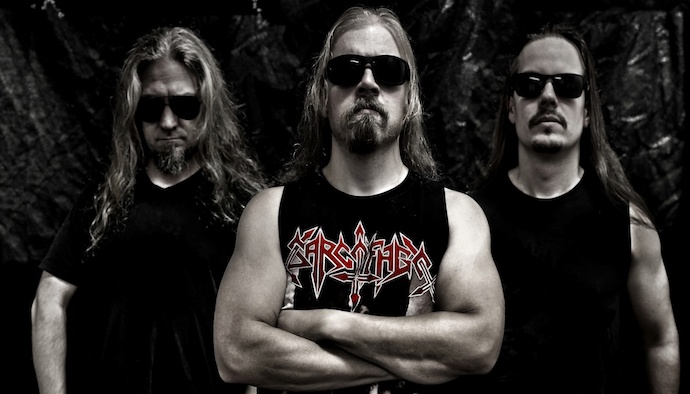 There are moments in “Primal Evil” where the filth-ridden guitars generate a dense, seething, diseased sound, like an infection burning through festering wounds. But more often the distorted riffing and the skull-slugging rhythms put us in mind of some hellish freight train, giant pistons pumping as it rumbles down the rails trailing toxic fumes — though with the speed accelerating and slowing in maniacal fashion.

With that hell-train metaphor still in mind, the charging machine seems controlled by a group of demonic engineers who violently roar, howl, and scream their commands with ecstatic savagery and no connection to sanity (the brief guitar solo sounds utterly crazed as well).

This hell-ride is a nasty, brutish thriller that manages to seem loose and nearly out of control, even though the band are pretty well locked-in as a unit.

Tormentor Tyrant was recorded and mixed by M.M at Rehearsalucifer Studios and Furnace 5034. He also executed a guitar solo on the song you just heard, and also gets credit for the band’s logo, emblem, and artwork (with layout credit going to Giorgio Spevo). The record was mastered by H. Sorvali at Trollhouse Audio.

Everlasting Spew will release this new EP on January 28, 2022 on CD, tape, and digital formats, and recommends it for fans of Malevolent Creation, Cancer, Deicide, and Skeletal Remains.