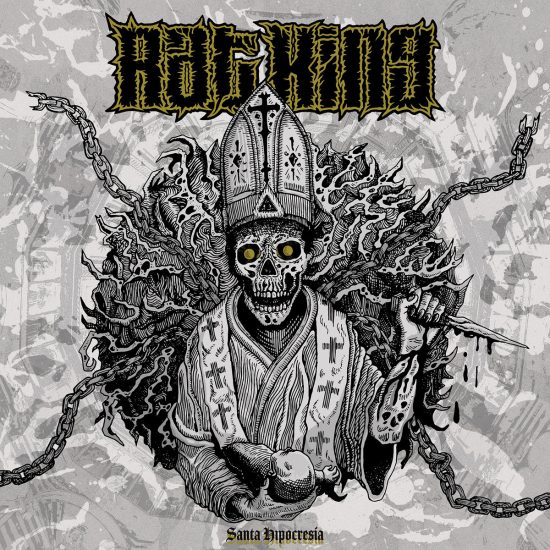 In April 2017 at Seattle’s tiny Funhouse venue I witnessed one of the earliest live performances by Rat King (along with my first exposure to live performances by Seattle’s Rhine and Arizona’s Lago). I wrote about the show here, At that point Rat King was a complete unknown to me (the two key members, bassist/vocalist Daniel Racines and guitarist Ricardo Racines, had moved to Seattle from Ecuador), but they made an immediate positive impression.

At that point Rat King had a debut album (Garbage Island), an EP, and a split in their discography, and they released a second album (Vicious Inhumanity) in 2020. That second album reflected a change in style, moving toward a fast-paced and vicious blend of death metal and grind, and on their new EP Santa Hipocresía (set for release on December 10th via Within The Mind Records) they mainly stay in the fast and furious lane.

But not everything on the new EP is high-speed savagery, as you’ll discover through our video premiere today of a bludgeoning and sinister track called “Morboso” (“morbid” in English). 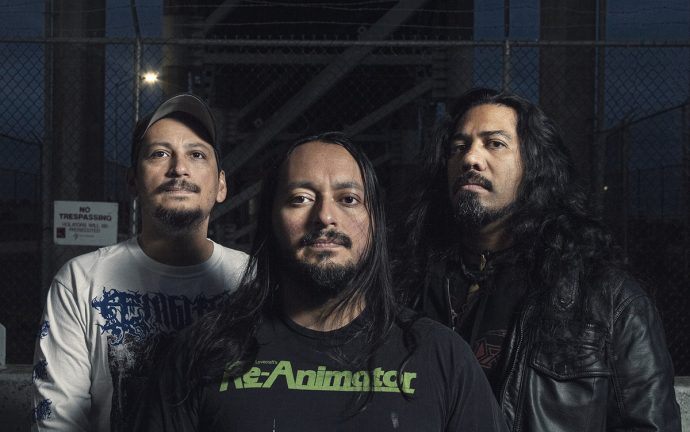 As the band comment: “This is the slowest song on the EP, leaning more towards the Death side of our sound. It gives a breath of air after the breakneck speed of the first 3 tracks. The video footage is from our first show back in July 2021 after the Shutdown”.

The track is a brutish mid-paced monster, a lumbering crusher of sound. With drummer Carlos Delgado using the kit to fire gunshots, the music heaves and hammers as Daniel Racines expels guttural bellowing roars. The impact is stupendous and convulsive, and the conjunction of Ricardo Racines‘ gruesome blaring chords, demented tremolo’d viciousness, and a weird and wailing solo conjures visions of supernatural horror. It’s a bone-smasher and a nightmare-inducer, and also happens to be hellishly infectious.

Santa Hipocresía was recorded at Soundhouse in Seattle by Wyatt Harbaugh, mixed at The Pit Recording Studio by Taylor Young, and mastered at Audiosiege by Brad Boatright. The cover art was made by Daniel Racines (Rateroart.com).

The EP is recommended for fans of Napalm Death, Hypocrisy, Nasum, Morbid Angel, and Sepultura, and it’s available for pre-order on cassette tape and digitally. We’re also including a stream of the official video for the EP’s first preview song “False Prophet” — which is a mauler, a bone-snapper, and a meat-grinder