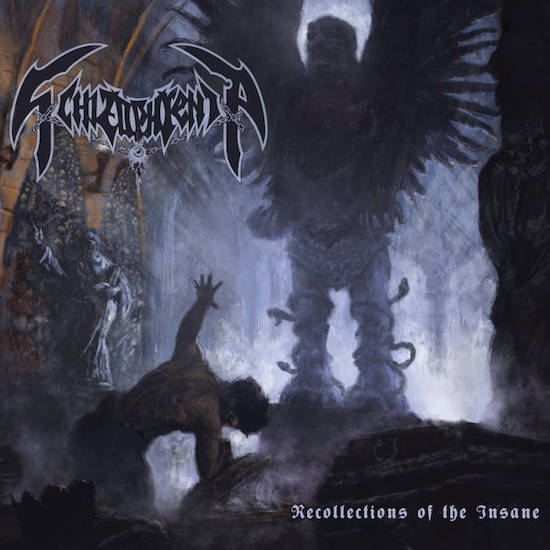 The Belgian death/thrashers Schizophrenia made their first appearance in our pages when our stalwart supporter eiterorm concluded a “Shades of Speed” column with a stream of their 2020 debut EP Voices, a record he exalted as an exercise in “fast-paced bludgeoning” that would encourage you “to headbang your brain out of your skull”.

Now we’re thrilled to help spread the word about Schizophrenia’s debut album Recollections of the Insane, which is due out on February 18, 2022. It sees the band again firing on all turbocharged cylinders, but getting even bigger, bolder, and more stylistically expansive than before, invoking vivid memories of such bands as Morbid Angel, Demolition Hammer, Slayer, early Sepultura, Dissection, Death, At The Gates, Obituary, Bolt Thrower, and Pestilence.

Today we’ve got a prime example of the album’s blood-rushing explosiveness and adept dynamism through our premiere of “Sea of Sorrow“.

“‘Sea of Sorrow‘ is a little bit of everything, it grabs you by the throat and keeps squeezing every bit of air out. Taking you thru a journey about the darkest place a person can lose itself in. In the writing process we wanted to accomplish a merciless track that’s perfectly balanced with melodies and crazy tempo changes to really accentuate the feeling and emotion of it all. This is definitely one of my personal favourite from the album.”

And now from Marty Van Kerckhoven:

“Raging at 230 beats per minute, ‘Sea Of Sorrow‘ is definitely one of the fastest, most brutal songs on the record. A long, complex composition process that merged elements of death metal, thrash metal and even incorporated oriental scales yielded a unique, heavy and progressive song. Rapid riffs paired with the slower, rhythmic middle section resulted in a composition that tells a story which provides a dismal, enigmatic atmosphere. I particularly enjoyed pushing our boundaries and challenging our compositional creativity along with creating compelling melodies for the lead sections”.

And now (of course) our own thoughts:

The visualizer for the song drenches the screen in fire, and that’s a fitting accompaniment to the firestorming music. The track is a high-octane, adrenaline-fueled rush, propelled by Lorenzo Vissol‘s gut-slugging, skull-cracking drumwork and by thunderous bass upheavals. The riffing and the soloing are equally electrifying, but they provide a dynamic experience as well. The guitars maniacally whirr and boil in a semblance of unchained, devilish ecstasy, but also blare in grand, imperious fashion, jolt and slash, and slither in a way that creates an occult atmosphere.

The nimble melodic soloing makes the experience even more electrifying and exotic, and as the music charges toward a breathtaking crescendo it becomes an experience of sweeping and sinister exaltation as well. And to cap off this high-octane thriller, vocalist (and bassist) Ricky Mandozzi growls, roars, and screams like an enraged beast.

As they have done before, Schizophrenia are releasing the album on their own and fully DIY despite receiving offers from worldwide record labels. The album was produced by Francesco Paoli of Fleshgod Apocalypse and mixed/mastered at Y-PRODUCTION by Yarne Heylen. The artwork, drawings, and layout were created by Khaos Diktator Design.

Pre-order info is below, and we’ve also included the video for the first single from the new album, “Cranial Disintegration“, which will give you a chance to watch the increasingly blood-soaked band rip and ravage their way through another pulse-pounding, neck-cracking track from the new album.