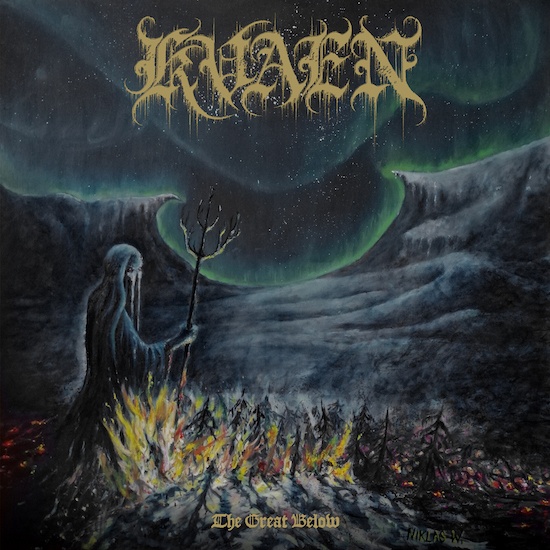 Almost two years ago Black Lion Records released the killer debut album (The Funeral Pyre) by the Swedish band Kvaen. In the run-up to that release we premiered its title track, published an interview of the band, and launched a review by our Andy Synn which lauded the record as “a tight, forty-five (and a half) minutes of rip-roaring, Thrash and Speed injected, Black Metal that takes no prisoners and shows no mercy”. He wrote these words too:

“There’s just so much love, so much passion, so much fire (and ice) driving this album that you can’t help but fall in love with it. It’s fearless, shameless, and absolutely relentless, in its pursuit of pitch-black perfection, throwing in more riffs, more hooks, and more epic, extravagant solos (trust me, when you reach that point in the title-track you’ll know what I’m talking about) with the sort of reckless abandon that suggests its creator is either a madman or a genius (and I know which one I’m betting on). Inarguably one of the best albums, front to back, to have been released so far this year”.

And so we’re understandably pretty damned excited to help spread the word that Kvaen‘s madman/genius creator Jakob Björnfot (along with an eye-opening lineup of guests) is returning with a sophomore full-length that the same Black Lion Records has set for release on March 25th of next year. The new one is named The Great Below, and once again we’re delighted to host the premiere of its title song.

This new song is presented via a playthrough video that features one of those guests — the great Jeff Loomis (current Arch Enemy, ex-Nevermore). And the song is pure fire — a gloriously blazing gallop that will make most die-hard metalheads lift their claws to the heavens. It’s packed with electrifying thrash riffs and viciously frenzied fretwork that pushes the music to the boiling point. Björnfot‘s wild howls enhance the song’s barbaric savagery, and drummer Tommi Tuhkala‘s pulse-pounding, neck-bending drumwork is another vital factor in producing such a hellishly good thrill-ride.

There does come a point when these racing wolves slow down and the music becomes more ominous, paving the way for a brief but beautifully executed guitar solo by Björnfot and then a dose of pounding groove that will get heads moving even harder. That groove becomes the foundation for Jeff Loomis‘ own solo, which (predictably) is fantastic. And don’t be surprised if the song gets quickly stuck in your head.

Even with just this one song as a sign, we expect The Great Below will light up 2022 like a bonfire.

As noted above, for the recording of this new album Jakob Björnfot was accompanied by drummer Tommi Tuhkala (who also serves as the live drummer for the band), and those above-mentioned guest appearances include performers on both solos and vocal duets — Mike Wead, Sebastian Ramstedt (Necrophobic), Angus Norder (Nekrokraft, Witchery), Nephente (Netherbird), and Finnish folk metal vocalist Vreth of Finntroll.

The album features eye-catching cover art by Niklas Webbjörn, and credit for the mixing and mastering goes to Owe Inborr at Wolfthrone Studios.

2 Responses to “AN NCS VIDEO PREMIERE: KVAEN — “THE GREAT BELOW””