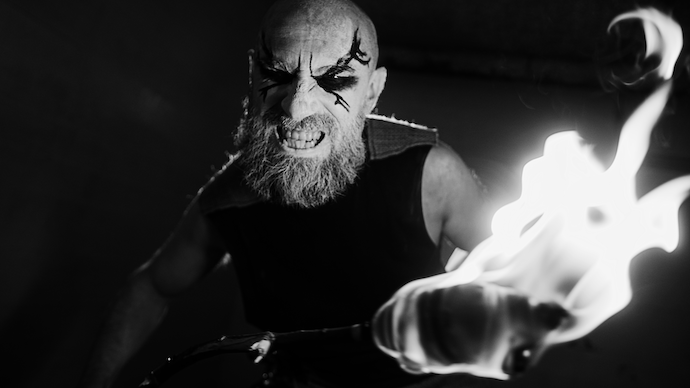 (Today we present another interview by Comrade Aleks, and this one is a discussion with the founder of the Swedish black metal band Hladomrak, whose latest album was released this fall by Non Serviam Records.)

From a first look Hladomrak is Swedish band which is tagged in Bandcamp like “pagan black metal” and even “Scandinavian black metal”. That’s simple. But the band’s name consists of two Slavonic words Hald (“cold”) and Mrak (“darkness”) and its mastermind Evgenerator started his underground career in he Latvian black metal band Nightwing twenty years ago.

And that’s another story, as nowadays Hladomrak has its third album Archaic Sacrifice out on the well-known Non Serviam Records, and the very fact of that guarantees them proper exposure. They keep the dark flame burning using the occult language “Reithariil” in their lyrics. In addition, they sound “true” and they sound “evil”… so why not to try to find out more behind this story? That’s what we were trying to do during this interview with Evgenerator himself.

Hi Evgenerator! How are you? How does the promotion of Archaic Sacrifice go?

Hell-o! I’m fine, thanx. It’s going well, our current label did amazing work! Hladomrak got lots of interviews in magazines worldwide such as Rock Hard Italy, Legacy, Metal Temple, etc. I can’t say about sales but so far the Archaic Sacrifice album was released digitally and on CD. Would be nice if Non Serviam Records will do a vinyl release too since it’s mentioned in the contract.

And I believe they will. As far as I heard from other bands with whom I’ve spoken in the last months, most vinyl releases come with delay. Did the pandemic situation inflict on your activity regarding the band?

The situation impacted us when we planned to go on tour in the Balkans. The Inner Death tour was cancelled twice. There is nothing you can do but focus on making records and new songs instead. 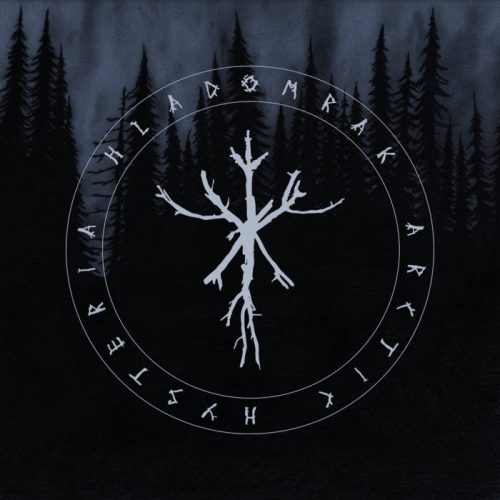 Hladomrak was started as your solo project, then it turned into a trio when you were recording Arctic Hysteria, and now it’s a duet of you and Talon on vocals. Do you still feel it as your own creature? As a continuation of your creative will?

I would say it was a duet. Until the new album release. You are the first magazine (!) who gets to know that Talon is fired from the band.

…At least no one was killed. For the moment Hladomrak has become a solo project. It’s definitely my project – my creature from the beginning, but all members made their own impact and some change in the creature’s DNA for sure!

Dipa who recorded bass on Arctic Hysteria is mentioned now just as a session member, how did it happen?

Dipa quit Hladomrak some time before the album recording but appeared just to record 4 tracks, the rest of the bass lines were done by Evgenerator.

Dipa (Alexey) is a member of the Estonian crust metal band Ognemöt and performed in the Swedish crust bands Adrestia and Blood of Jupiter (David Isberg, Opeth founder’s project). 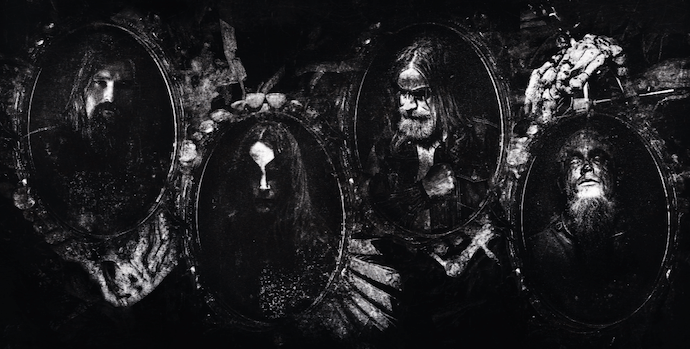 How it did come to this that Hladomrak became what it is? Does it still reflect your original intentions?

The songwriting itself didn’t change a lot. Everything starts with a cool riff in Hladomrak. It’s the root of our music. Sound changes from album to album, that’s normal. Various studios and members change, making it sound different. The latest co-working with Drygva studio gave us a more predictable sound and result. Both the Inner Death EP and the Archaic Sacrifice album were mixed and mastered by Alexey Stetsyuk in Belarus. The guy who mixed Slot and Amatory by the way.

Hladomrak’s name is based on two Slavic words, but your music obtains universal qualities of black metal as we know it. What kind of stylistic or spiritual features do you see in your work?

We perform black metal of the ’90s with some death metal influences of the ’80s I would say.

Hladomrak’s Bandcamp describes your stuff both as “pagan black metal” and “Scandinavian black metal”. Is there a contradiction regarding your background?

There are eight years between the Hladomrak debut and Archaic Sacrifice. How would you summarize the project’s development for this period? What was a milestone on this way?

Seems to be Hladomrak develops organically. Everything happens in due time. The latest album can be that milestone since we reached a new level in production and promotion. It’s a huge step forward. But not the last one!

How do you measure this new level of Hladomrak’s production?

Normally after production we measure our masterpiece with a Misanthrometer. This time it showed us 100% misanthropy and 4 promille alcohol in our blood! Perfect mix!

The dominating theme of original black metal was that “true and evil” line, a prime “malice” essence tightly associated with the genre. How do you see the echoes of this manifest in Hladomrak?

In the way of lyrics Hladomrak definitely has strong connections to misanthropic themes and black metal origins. Hard to judge the sound itself. Seems to be that it’s far away from early black metal sound. But you might be surprised at the next release.

Really? Do you already have new material? Or just some ideas in which direction to move?

Yes, there are 3 demo songs done yet. I’m working on track nr.4 now and already have new riffs for a couple more songs. You can expect typical Hladomrak work.

Regarding new directions… How do you see the situation in the modern black metal underground nowadays? There’s a returning back to roots trend on one side, and this post / shoegazing blackened movement on the other. What do you think?

I don’t pay too much attention to what’s happening right now in the BM scene but what I see is that there is a trend to play slow, atmospheric melodic black metal. For me it feels like doom metal, it is too slow.

I like thrash and death metal vibes, they are more straightforward, killing, crushing and destroying everything around – there is more “live” in them! Everyone has the right to decide what and how they’re gonna play, there is nothing good with trends. Much better when bands are unique and sound different. Actually that’s the hardest thing – to get your own sound and stand out of a crowd. 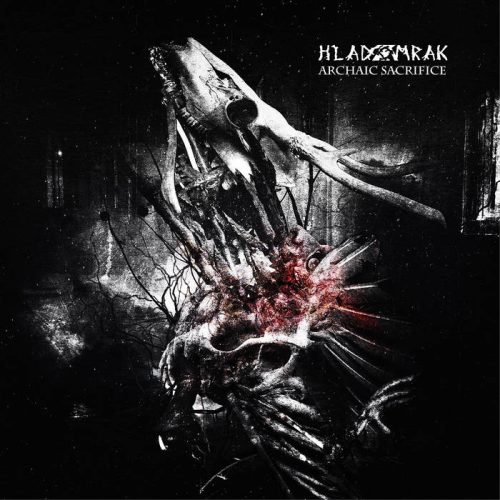 In which conditions did you record Archaic Sacrifice? What kind of a picture did you have in your mind when starting the work over these songs?

None of the Archaic Sacrifice songs were composed during the recording process in the studio. Everything was prepared and demo-tested before. It’s like preparing and cleaning a gun, everything should be checked and loaded before the attack.

What kind of message did you put into the Archaic Sacrifice lyrics?

The base of the lyrics derives from the concept of Hladomrak, forged in the Archaic Sacrifice album with Fall division-luciferianism. The album title is a connecting theme for every track. The name refers to mankind as the disposable, short-lived race which was always meant to be erased.

You said that you write lyrics in English, Reithariil and Finnish. What caused your choice?

It would be more correct to say Russian, English and Reithariil. Hladomrak never had complete lyrics in Finnish except one phrase “Painu vittuun” in the beginning of the “Fozforos Insignia” song. It means “Fuck you”. The debut Hladomrak album was recorded in Russian. The rest was in English until the newest album Archaic Sacrifice, where we used both English and Talon’s own occult language Reithariil which I can’t even understand. An idea has been for a long time to make some tracks in Swedish too. Maybe a whole album… You never know. 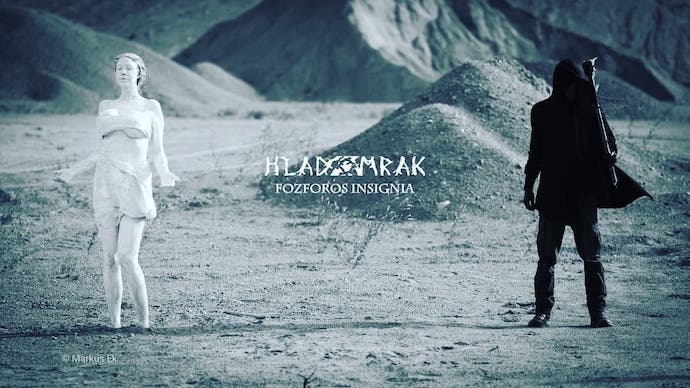 As far as I understand – Reithariil is a ritualistic language. Did Talon tend to put real under-layered meaning in Hladomrak’s songs? How do you expect it to work?

Yes, there are lots of hidden meanings going together with Fall division spells in the Archaic Sacrifice lyrics. The latest singer was a fanatic of its own manifest and vision. I would not be surprised if suicide or someone’s death befalls. I have that experience from my previous black metal band Nightwing (2000/2004).

Winter Solace Productions, More Hate Productions, and now Non Serviam Records. Do you feel this change of label was an important act? How comfortable is it for you to collaborate with Non Serviam?

It feels important. The main difference if we compare these labels is that Non Serviam has definitely wider promotion. The NeeCee agency and Century Media network were involved this time. Non Serviam Records has covered “Fozforos Insignia” filming issues and the contract  itself looks very cool.