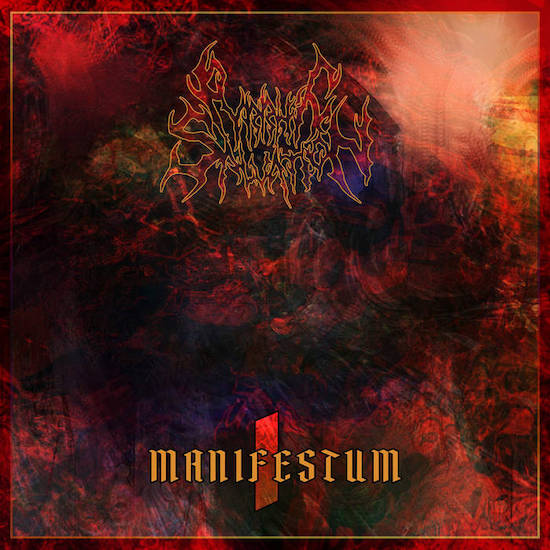 Back in 2016 then-NCS writer Austin Weber (who later moved over to curate the “Tech-Death Tuesday” column for Metal Injection) unearthed a debut demo by a group named Pyrrhic Salvation which made a big favorable impression. As Austin wrote at that time, “This is some dense, eclectic, and multi-layered tech-death the likes of which few bands can conjure…. While I’m hardly jaded, it does take a lot to impress me, and the two songs on display here really have my jaw permanently dropped to the floor.”

Since then, Pyrrhic Salvation have expanded from an instrumental duo (guitarist Michael Altobello and drummer/fretless-bassist Sagar Nadgir) to a three-person unit that includes a vocalist (Chrisom Infernium of Veilburner). Though separated by geography, the trio have worked closely together to create a debut full-length that’s set for release on February 18th. The name of the album is Manifestum I, and today we’re helping spread the word through our premiere of an album track called “Revelations (of Agonies to Come)“.

Almost six years later, Austin‘s early words about the demo still ring true, yet the advances manifested on Manifestum I as compared to that early demo are obvious, and the achievements even more impressive. The band have braided together a wide range of influences, with an adventurous approach to songwriting and a level of execution that’s (still) jaw-dropping.

“Revelations (of Agonies to Come)” is a great (and unnerving) example of these qualities. The overarching sensation generated by the song is one of madness. The channel-separated guitars writhe and scream in dense, superheated maelstroms of sound, whipping and whirling around drum patterns that continually change and a prominent bass pulse that is itself a rapidly morphing presence. The rabid vocals enhance the fearsome and frightening impact of the song, venting bestial derangement across a range of growls, snarls, shrieks, choking gags, wild yells, and moaning utterances.

Eerie and abysmal chiming tones ring through the brazen and assaulting audio vortices. Drums boom and hammer in sudden destabilizing flurries. Cymbals crash, and near-celestial tones shimmer like wraiths, creating an aspect of disturbing splendor within this kaleidoscope of terror and pain.

As mentioned earlier, there’s an obviously impressive level of intricacy and technical skill in the execution, but this isn’t what we think of as simply “tech death”. It seems more in line with a progressively inclined melding of death and black metal with an air of the esoteric about it.

Among their wide-ranging influences, Pyrrhic Salvation identify such groups as Hate Eternal, Artificial Brain, Ulcerate, Vital Remains, Immolation, Anata, Spawn of Possession, Suffocation, and Blotted Science, and the album is likely to appeal to fans of those bands.

The record was mixed and mastered by Sagar Nadgir, and features cover art by The Lung Swarm (aka the afore-mentioned Austin Weber). It’s available for pre-order now. And we’ve also included a stream of the album’s first single, “Those that Dwell“.