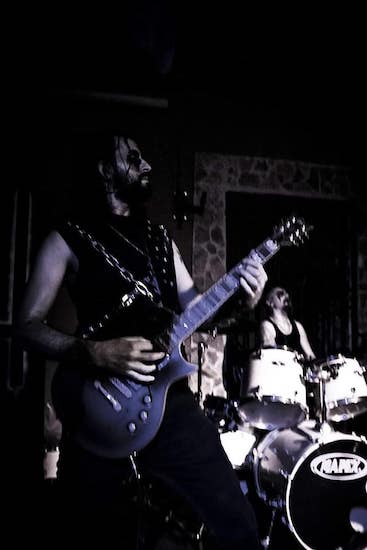 (In this new interview Comrade Aleks had a conversation with Schizoid, the mastermind of the Italian black metal band Malauriu, whose latest release was a 2021 split with Malvento and Abigail.)

I have a very vague impression regarding the Italian black metal scene, and this interview with Schizoid (a.k.a. Asmodeus) helped me to learn a bit more about the Sicilian non-doom underground.

Schizoid started in the thrash / black duet Urlo Nero in 2011, then after its disbanding in 2013 he founded Malauriu (black metal) and its far less productive twin Sintenza (black metal). A year ago he returned to his thrash / black roots with the Ossario band, but after all Malauriu remains his main creature.

So how do the dark powers work through this band? Schizoid knows.

Hi Schizoid! We were talking about new releases regarding Malauriu but I see that you’re involved in three more bands. Which of them are active now? Is Malauriu your main project?

Hi! Yes, Malauriu is my main project. It’s been active or about ten years, and over the last two, since approximately 2019, we’ve also been playing live. I’ve worked in the meantime on many other projects, especially Ossario during the last year. I’m currently writing the music for the new album of this project.  Last but not least, I’ve played both live and in the studio with Spasticus, a project which is currently preparing its new release, a split with Boia (to be released later in 2022 by Caligari Records). Unfortunately, I’m no longer playing with this project due to the logistics, as the distance between me and them is way too much right now.

Malauriu was founded in 2013. What drove you to start this straightforward black metal act?

I’ve given birth to this project without any big plans or the aim of something specific. I honestly thought I would have closed it after its first EP. In the end, considering the good feedback from some webzines and the public, I decided to keep it alive and especially keep working on it. Through ups and downs, we have released numerous productions and we still have quite a lot of material we’ll make public in time. 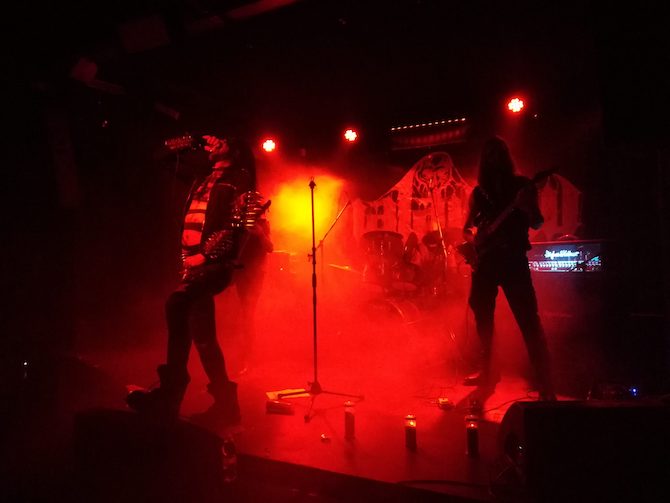 Why did you choose black metal? Which bands opened the gates to this realm for you?

When I was about 13, I started listening to Burzum, MayheM, and Darkthrone. I’ve been bewitched by such music and I’ve never stopped listening to it since. I’m always looking for old and new releases though. On top of that, I listen to a lot of different genres, but black metal is to me something “necessary”, that I could never abandon.

From the very beginning you used lyrics in Italian. What was behind this decision? Was it just a simpler way to put out your message or something?

To use Italian and Sicilian dialect lyrics, as we did with our first EP, is sometimes difficult and provides some limitations. Although some people out there seem to be fascinated by albums such as Presagi Di Morte (which translates from Italian into “Death Omens”) or Semper Ad Mortem Cogitantes (which translates from Latin into “Death Obsessed”) where the lyrics have been of course in both Italian and Latin. Our latest releases, from 2018 onwards, have got English lyrics but I wouldn’t doubt that in future we might get back to using Italian and Sicilian dialect.

By the way, what are Malauriu’s lyrics are about? Metal-Archives points to “death and human misery”, and there was a Baphomet pic on some of your albums’ artworks, so what’s it all about?

Our lyrics talk about esotericism, death, folk tales and rites linked to our country. Also, Southern Italy has got a long tradition in terms of witchcraft and superstitions, with extremely interesting characteristics, and these themes as well have influenced us.

How much of your Italian background is in your lyrics?

There’s quite an Italian and Sicilian background in our music. In Sicily we feel quite different than other cultures and there is a lot to talk about when you get to discover the ritualistic traditions, how people interface with the death cult, how savage is the holy mass when it gets to Christ’s passion, or the fascination generated by the cults and rites around the Easter period. There is something magical and ancient there, something dark and mysterious. 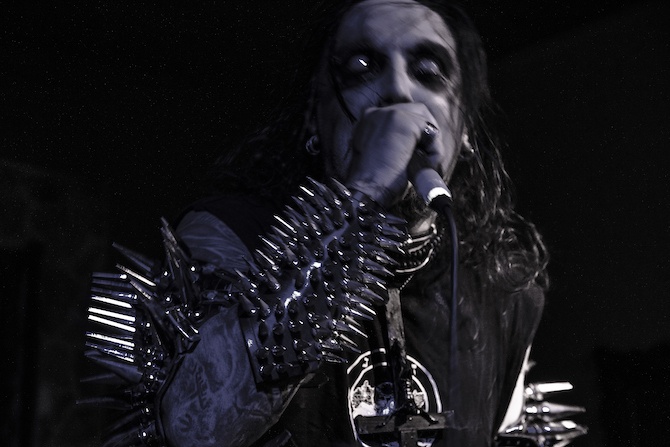 It seems the Italian black metal scene was never that big, so I’ll be grateful if you could provide a kind of introduction to the local blackened underground.

Between the end of the ‘80s and the early ‘90s the country went through some sort of boom in terms of extreme metal. It might be enough mentioning acts such as Mortuary Drape, Necromass, Opera IX, Necrodeath and many others not necessarily linked to black metal.

Some names, in this respect, are memorable, see Schizo and Bulldozer. Also Death SS, who for some people might be named as the actual godfathers of black metal (as they were formed way before Venom and had a very similar sound), might be mentioned as linked to black metal in terms of aesthetics, their dismal riffing, and the inspiration provided to so many old and new bands under these points of view.

Still nowadays there are some incredible acts in Italy, unfortunately quite often snubbed in their own country where people seem to like way more foreign music.

Can you name some of them? 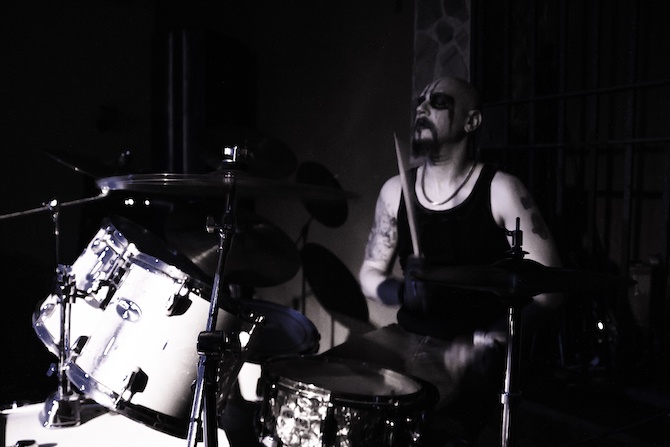 Speaking about specific Italian genres, one would mention the Italian Dark Sound as something covering prog, doom, and heavy bands united with passion for the atmospheric grim sound and classic dark Italian cinematograph. Can you tell if Italian black metal has its own specific features too?

Italian black metal, especially during the ‘90s, had a real occult sound, with a heavy reliance on keyboards and extremely symphonic approaches. On top of that, both lyrical themes and aesthetics were unique in comparison to other countries. It would be enough to listen to albums of bands such as Heretical, Inchiuvatu, Necromass, Evol, Maldoror, to understand where I’m coming from.

It was back during the ‘90s, but what about modern bands?

Still nowadays the roots are strong; quite a lot of bands have kept the “Italian dark sound” alive. The “scene” is incredibly wide although all bands follow their own path. I personally listen to genuine and authentic releases, no bothering about labels, genres, or subgenres.

There are more than a dozen releases in Malauriu’s discography, with only one full-length Semper ad Mortem Cogitantes, released in 2017. Why do you hold to this releasing policy till nowadays? How does it work?

I don’t really follow a template for my releases. I love creating at once two or three tracks and get them released soon after that, quite often as split albums with bands I like and appreciate. Quite a lot of the bands we worked with during the years are real friends and we keep working together after years. Also, in terms of budget, releasing EPs, demos, and splits, is way cheaper.

I’m currently working on a new album which is going to be released in 2022. Until then, we are not going to release anything else, I hope, haha.

Being a fan of this split-release aesthetic, can you point to the local black metal bands with whom you do prefer to collaborate?

For sure I forgot some important ones. Once again, I’m convinced we have some really incredible bands in Italy with which I’ve collaborated in the past and I wish I could partner with in future. 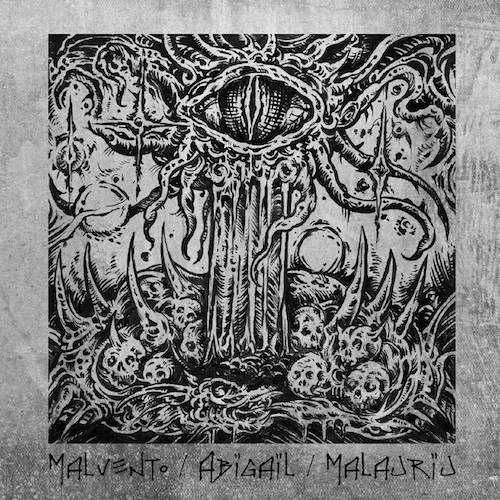 How often did you play live with Malauriu? What are features of the local BM shows? Let’s say… do you have BM-specific venues where you can easily find an opportunity to play or something?

We have played three times live with Malauriu in Sicily. Unfortunately, we do not have locally so many venues where black metal or extreme music in general are supported.

Usually, we don’t feel really keen on playing too many gigs; we would rather prefer fewer but valid shows. We aim for extremely visual and theatrical shows (i.e., during one of the latest shows we played, we got our singer on stage by having him transported by a local undertaker inside a coffin). I must also say that in Southern Italy there are not so many places that might have survived the changing of seasons, but those few still there are the best and worth all you can give and bring on stage.

This December we are going to play in Caserta, a town close to Naples, sharing the stage with Malvento (an incredible and historical Italian band around since 1996). We hope that’s going to close the year on a good note, considering the last two years of total madness.

Do you feel enough support in your own country? Or do you get feedback rather from abroad?

Malauriu receives quite a lot of in-country-support and there are people supporting us since the very beginning by buying CDs, Vinyls, and cassettes. I truly appreciate who has been coming along to our gigs, covering huge distances. I hope in the near future we might be able to play abroad besides playing other shows in our country.

Okay, actually, that’s all for today. Thanks for the interview. Did we forget something?

Many thanks to you for the coverage and support. Never stop supporting the underground!
F.O.A.D.