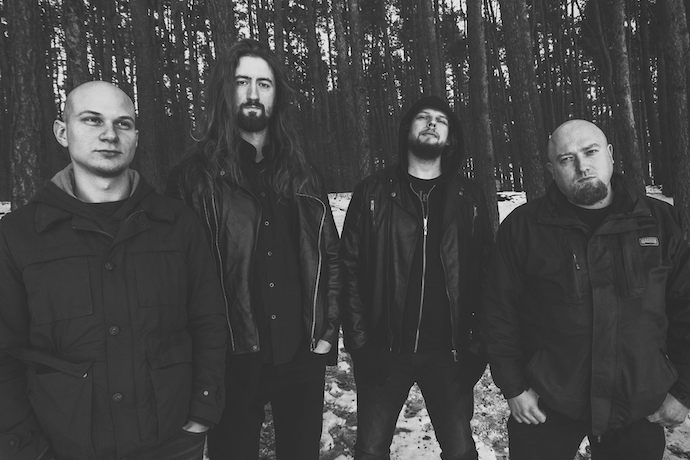 (The Polish death/doom band Death Has Spoken released their excellent second album three months ago, and it prompted Comrade Aleks to reach out for an interview, which we now present.)

I don’t remember how I discovered the Polish death-doom band Death Has Spoken, but I decided to interview them as soon as I found titles of H.P. Lovecraft’s stories in their second album Call of the Abyss (2021). Lovecraft and death-doom metal – that’s enough for me to reach out and get in contact with the band.

Thus the interview with Death Has Spoken‘s collective mind was an absolutely spontaneous thing, so heed the ‘Call of the Abyss’ and feel ‘Lurking Fear’ in our discussion with vocalist and guitarist Karol Pogorzelski!

Hi there! Death Has Spoken just released a second album but still the band’s story is obscured for most of our readers. How did you meet each other and come to the decision to perform this form of death-doom?

We came from the same “underground metal scene”, so less or more we played together in the same bands. Mikołaj joined us two years ago. We tried lots of styles and metal genres but at the end we met at this project and said ‘this is it’.

Actually, I didn’t find if any of Death Has Spoken’s members played in other bands. Can you tell us a few names? What kind of stuff did you play before death doom?

I’m not surprised by this. It was really deep and local underground. The bands were called Backsly (alternative metal), Grave In Your Garden (heavy metal), and Downfall (melodic death metal). 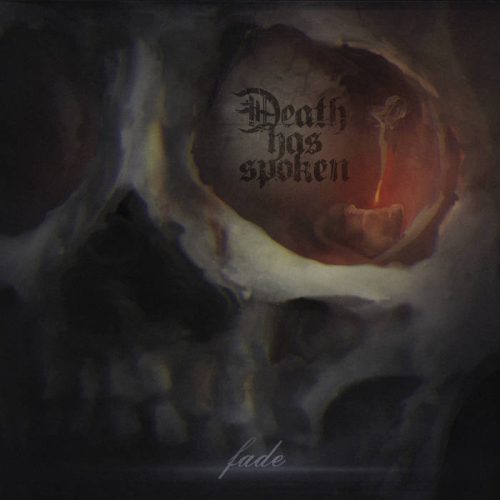 You released the debut Fade in 2017. What did you want to achieve on this record? Did you have a plan when you started composing this stuff?

At first, we thought about it as a “one record project” and we hadn’t any expectations. We just thought “let’s record this and see what happens.” And to be honest: we didn’t expect much.

And what happened then to make you record another album in addition?

Good feedback from listeners, reviewers, and of course decisions of our friends who decided to join the band.

What motivated you to add blackened pieces in the doom death metal which remains Death Has Spoken’s fundament? Did any of the band’s members have any of that musical background before?

I think we took it from one of our abandoned projects. We tried it in one of our songs and agreed that it sounds really good. So why not try it in the others? And that’s how it was. All of us are familiar with black metal music but I think that none of us played in a typical black metal band.

The album was released in a DIY way, so how did you promote it back then? Did you feel you did it effectively?

We did what we could in that time. We were a fresh band and so there were many things to do. Looking at that right now, maybe we could have done more but we did enough to push the band forward. 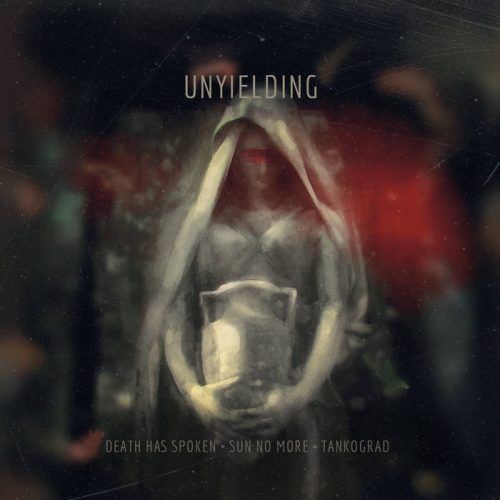 You took part in the self-released split Unyielding alongside the bands Tankograd and Sun No More. Was it some sort of Polish doom metal manifest for you? The local doom scene has a few new names indeed, though I doubt we can talk about a real “scene” indeed.

There aren’t many death doom metal bands in Poland. Actually a few I guess. We finished our records nearly at the same time and we thought that it would be a good idea to release it together and play some shows in the country. Unfortunately all the mess with Covid-19 started and we played only two gigs. Well, better than nothing. Right now the situation isn’t clear but maybe we will have a chance to do it properly. 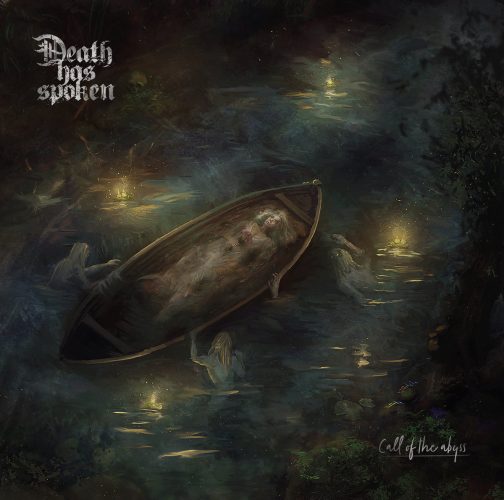 It’s said that your second album Call of the Abyss is a continuation of the story contained in Fade, with the addition of H.P. Lovecraft inspired themes. First of all, does it mean Fade was a concept album? What’s the story behind it?

That’s true. Fade tells a story about death and all things that happen (or could happen) soon after that. The main character realised that the end had come but he didn’t feel fear. Somehow he knows that his journey has just begun. He starts thinking about all the things that flow away, wanting to relieve everyone that he loves, but suddenly he understands that this is useless and feels relief. He sees his new path, and even if it’s full of darkness he believes that this weak light shining in him will help go through that.

So Fade wasn’t based on any H.P. stories, right?

Yes, that’s right. Fade is based on the novels by Edgar Allan Poe.

How do you continue this theme in Call of the Abyss?

The end of the first album is a metaphor of life after death. Sailing right to the darkness of the North, through the winds and storms to the unknown lands. But during this journey the main character looks deep underwater. He feels calm and hears calling from this deep abyss. He decides to fall into it. Soon he will find out that this is not what he was expecting. 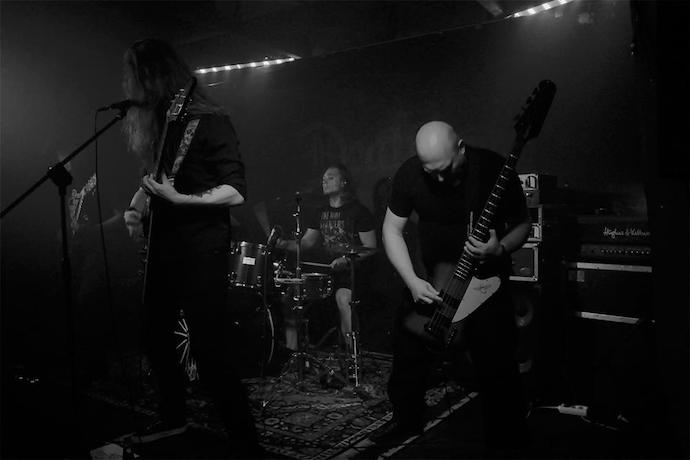 As I understand, “Lovecraft inspired themes” refers to ‘The Lurking Fear’ song. Why did you decide to add it to your own story?

Actually the whole album is based on Lovecraft novels. But because of the title, “Lurking Fear” is the most obvious. After the Fade album I was looking for more inspirations for new lyrics. Lovecraft wasn’t my first choice. I know his works mainly because of the Cthulhu mythology but this theme is out of my interest if we are talking about lyrics for the band. I think that my brother told me more about other Lovecraft works and I decided to check it out. I bought a thick book and from the first pages I fell into it.

‘The Lurking Fear’ has a kind of tangled plot. How did you manage to fit it in one track?

That’s true, and that’s why I concentrated on the main feeling that this novel has, not on the plot. When I heard the main guitar riff of this song I automatically knew what title and theme we would give for this one.

What do you mean as you tell about “the main feeling this novel has”? The fear of the unknown? Maybe old school superstitions? The madness of facing something that human eyes shouldn’t see?

The fear and the madness of facing what you expected to find, but to the end you thought you could run from that.

You recorded Call of the Abyss in a real studio though a lot of bands prefer to record everything at home as it’s cheaper, you have more time, and so on. Pandemic thing also… So why did you choose to record your stuff at the studio? How would you value this experience?

When you said it I started thinking why we don’t record at home, and why we want to lose more money and time for travel to the studio. I’m just joking of course 😉 In previous projects we recorded most of the material at home. Recording an album in a real studio was like a dream. I think this is one of the reasons why you join the band: to record material together in the studio.

What was the most difficult stage for you during the Call of the Abyss recording? Did you have any technical troubles? Or did you have problems with the building of the album’s concept?

Recording vocals. Three days, day after day – unfortunately it was too much for me. I mean we made it right but I felt like I was close to the breaking point and that scared me. There are still things I need to learn in vocal techniques, and I need to know my limits, especially when it’s hard work to do in the studio.

How long did you work on the album’s plot? Did you think to base it entirely on H.P.’s myths?

Something like six months, I suppose. I don’t count the time for reading H.P. Lovecraft novels. I didn’t want to tell Lovecraft myths. I think it would make it impossible to continue the story from the previous album. Instead of that I decided to take inspiration and extend the plot from Fade.

What are your plans now regarding Death Has Spoken? You have the album released a few months ago, and there aren’t many opportunities to play gigs, so what’s next?

We will try to do our best and grab opportunities to do a few shows. I think then we will focus on the new material. At the moment, we have some ideas to work with. There is also some stuff from the last studio session that we haven’t released yet, so stay tuned.