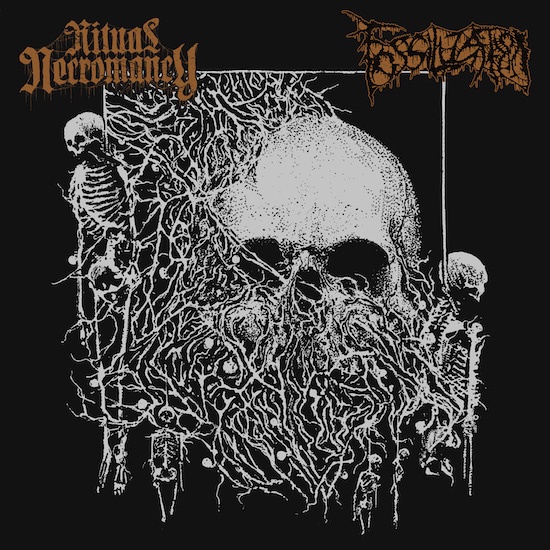 On February 25th Everlasting Spew will release a split between two monstrously formidable death metal bands, Brazil’s Fossilization and Oregon-based Ritual Necromancy. One of Fossilization‘s two tracks on the split has already been revealed, and today we present an excerpt from Ritual Necromancy‘s long single song, “Enter the Depths“.

It’s likely that most of our visitors are already well aware of Ritual Necromancy‘s blood-congealing and exhilarating powers. With a well-experienced line-up that includes members of Rites of Thy Degringolade, Ascended Dead, Bloodsoaked, Decrepisy, Lord Gore, and more, the band have released two albums (2011’s Oath of the Abyss and 2018’s Disinterred Horror) and an EP (2014’s Void Manifest), which have propelled them into tours of Europe as well as the U.S. This new split is another timely demonstration of their hideous talents. 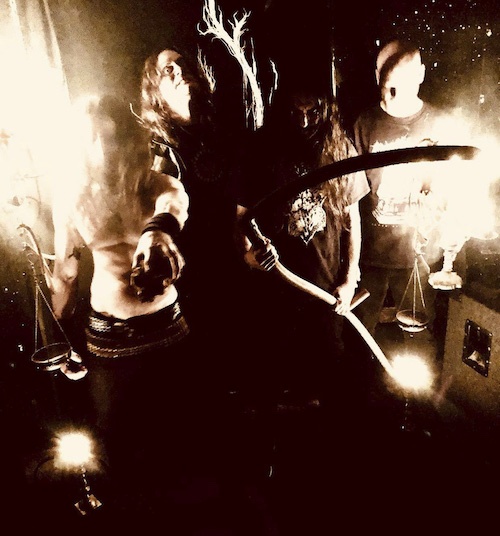 “Enter the Depths” transports the listener into nightmare realms for 15 1/2 minutes. The premiere we have for you today (subtitled “Coda“) presents the last six minutes and 15 seconds of that morbid and mayhem-ridden journey. We’d like to put it in context by attempting to describe what happens in the song before you get there.

With an introduction consisting of a single reverberating boom, the song immediately begins saturating the senses with a thick wall of dismal, viciously distorted riffing. Over an undercurrent of avalanche-style percussion, the flickering dual guitars buzz and abrade, rising and falling, moaning and wailing, creating a deleterious harmony of sickness and misery. When the drumming slows into a plod, the feelings of gloom and hopelessness descend even deeper into the abyss they have created.

The vocals don’t emerge from their own subterranean depths until almost three minutes in, and they are horrifying — guttural growls so deep and monstrous they sound authentically inhuman. From there, the music becomes schizophrenic, alternating between sickening slogs through toxic tar and spasms of percussive and fretwork frenzy.

Shrill tones spear upward like anguished ghosts, writhing above mind-mutilating chords and pounding punishment. Unnerving guitar convulsions ensue, segmented by neck-wrecking hammer blows and bursts of drum-kit mortar fire. The music becomes an experience in violent madness and mania, with horrid howls accompanying those hideous growls. The effect is cataclysmic, overpowering the listener in a massive torrent of dense, discordant, fleet-fingered riffing, blaring arpeggios, and ruinous drum upheavals — and our track premiere begins in the midst of that roiling maelstrom.

That spinning vortex of raging and deranged riffage, thunderous drumming, and hideous roars continues on its slaughtering course, but eventually is replaced by an interval of feverish drum beats and simmering guitar dementia, paving the way for rhythmic chords and rolling thunder in the law end, interspersed with the vicious buzzing whir and blur of guitar madness, augmented by eerie wailing leads, and harrowing vocals that themselves wail in agony (or insanity). Slowly, at the end, it seems as if the band have succeeded in breaking through into a dimension of freezing void, and we enter it with them.

Fossilization‘s doom-influenced formulation of death metal makes for a fine match with Ritual Necromancy‘s music. They’re a more recent spawning from the underground, having come together in 2020, but they too feature an experienced line-up. This Brazilian duo consists of members of the terrific sludge/death/doom metal band Jupiterian — V. (voices, guitars, bass) and P. (drums). This spit follows their debut EP, He Whose Name Was Long Forgotten, which was also released by Everlasting Spew.

Everlasting Spew will release the split in CD, tape, and digital formats on February 25th, with a vinyl edition expected this coming summer. They recommend it for fans of Incantation, Dead Congregation, Cruciamentum, and Krypts. Along with pre-order links, we’ve also included a stream of the first of the two Fossilization tracks on the split — “Exalted in the Altar of Insignificance“. Be sure to listen to that too!