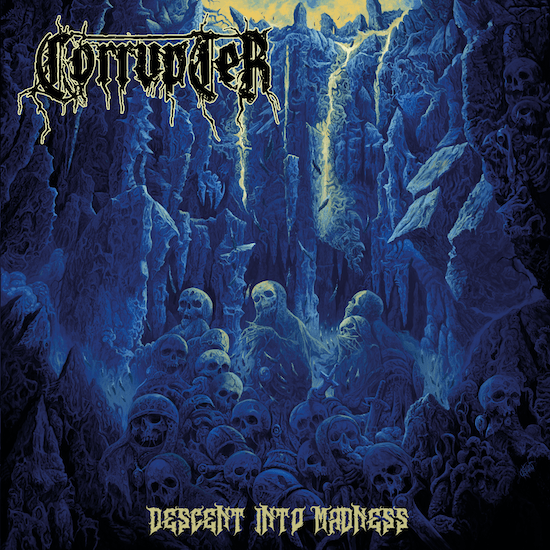 Only hindsight gives us the ability to speculate about why a band or their label chooses one particular song as the first single from a new album. In the case of Corrupter‘s full-length debut Descent Into Madness, that chosen song was “Darkest Light“.

The opening riff of that song, which has a dismal and diseased aura, seizes attention quickly, but no more so than the eruption of thunderous battery, miasma-like riffing, and gory, gargled vocals that follow it. The guitar work has a dense and writhing quality that’s frightening, and even when the drumming slows and Corrupter send off grand but deeply disturbing fanfares of sound it’s enough to put a cold sweat on the back of your neck.

The second time the music explodes in violence, propelled by a crazed solo, might be even more exhilarating than the first time, an experience in ferocity and fear, madness, and malignancy that’s not soon forgotten. 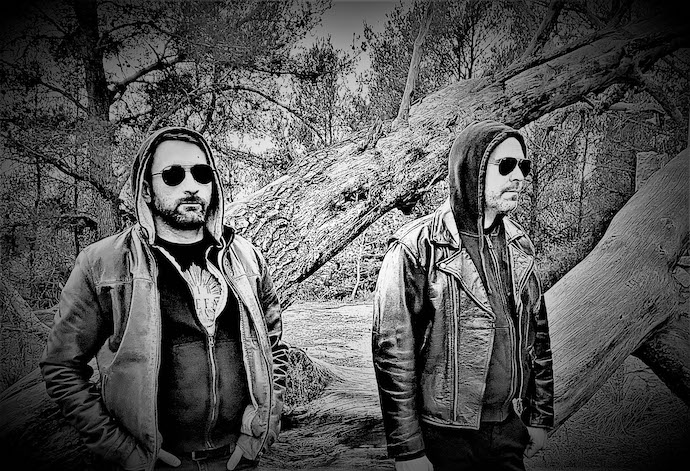 When you hear the rest of this French death metal band’s first album you’ll have a good guess about why “Darkest Light” was chosen to introduce the album to listeners. That song makes very clear that Corrupter are capable of creating brutally ruinous musical assaults, but are at least equally capable of creating horrifying visions of terror and hideous infection, and do so in dynamic fashion. The rest of the album is in keeping with those initial impressions.

Other songs on the album may be even more insanely slaughtering than “Darkest Light”. The band use those dense and devastating tremolo’d riffs, spine-jarring and skull-fracturing drumwork, gut-churning and bone-grinding bass lines, grotesque growls, and serrated-edge howls to throw the listener into war zones of unhinged savagery. The impact of those all-out rampages is intense enough to suck the wind from your lungs and leave the whites of your eyes showing.

But as that first single revealed, Corrupter know how to write damn good songs too. They continually shift gears and percussive patterns within the tracks (the drumming, by the way, is outstanding from start to finish), stomping, clawing, and rumbling their way forward as well as careening into those shattering high-speed attacks. Moreover, the band deftly bring in emotionally evocative melodies and nightmarish solos (which are weird, wailing, and riotous) that create a riveting array of unnerving moods.

In those melodies (which often make effective use of dissonance), there’s no hope or joy to be found, only oppression, fear, misery, desperation, derangement, and decay — which is in keeping with the album’s lyrical themes of disgust, rage, nihilism, and an embrace of death. But those pitch-black melodic accents, most fully revealed when the band aren’t in full-on rampaging mode, are nonetheless ruthlessly gripping.

And so this is an album that quickly seizes attention and is so multi-faceted, and so ruinously powerful on multiple levels, that it doesn’t let go. The fact that it’s the work of only two men (with a guest appearance by Meyhna’ch from Mütiilation), and that this duo was also responsible for recording and producing the album, makes it even more remarkable.

Descent Into Madness will be released by Godz Ov War Productions on February 11th in CD and digital editions. The stunning cover art was made by Juanjo Castellano Rosado.

One Response to “AN NCS ALBUM PREMIERE (AND A REVIEW): CORRUPTER — “DESCENT INTO MADNESS””