Following up on their excellent 2021 EP Six Foot Box (for which we happily hosted a premiere), the Indiana-based metal band Death On Fire are today releasing a new two-track vinyl single as a prelude to their forthcoming album Burial Hymns.

Both songs provide a vivid reminder of Death On Fire‘s viscerally potent but intriguing musical amalgams, which often include stylistic traits from death metal, thrash, the blues, hard rock, and more. What we have for you now, presented through a lyric video, is a premiere of the title track from the new release, “The Dying Light“. 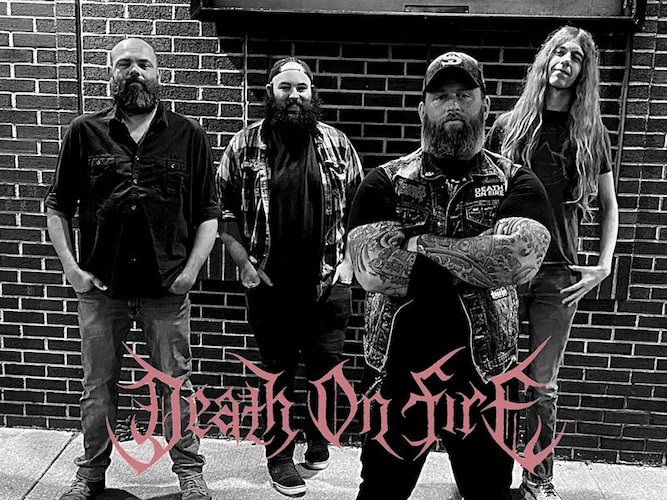 Death On Fire‘s vocalist/guitarist Tim sums up the song’s theme this way: “It is the existential fear of what comes after death and the difficulty of watching everyone we care about die. This song is knowing the vibrant light of life fades away into darkness. It also has a tasty lead.”

The song is a blend of contrasting sensations that proves to be immediately gripping and highly contagious. As Tim’s quote foretells, both in its words and in its melodies it’s a bleak experience, but it’s so primally powerful and so massively groovesome that sitting still as you listen is out of the question, and although the vocals are harrowing they’re damned memorable.

One the subject of groove, the sharp cracking and clattering beats of the snare drum and the synced-up hammering of the bass and the kick drums is relentlessly compulsive. The thick, grim, yet vibrant pulsations of the track’s main riff, in addition to being virally infectious, will also get you moving. The song further includes doses of beleaguered and moaning melody, as well as searing, screaming leads, that add to the song’s dismal and distressing moods.

As mentioned, the vocals are also a huge part of the song’s appeal. They sound like the baying of a big hound, edged with grit and sometimes rising into wails and shrieks — almost singing, but too raw to be called that.

The other side of the new 7″, and the first single to be revealed (through a premiered at Decibel, is “Slave“, and we’re including a stream of that one too. It’s also a heavy-grooved and highly infectious track, but as compared to “The Dying Light” it’s an order of magnitude more fiery and fast-paced, and inflicts a more severe beating. It also includes electrifying guitar solos that channel a kind of ecstatic derangement — but there’s a bruising darkness in the music as well.

The Dying Light is available on vinyl, and with a t-shirt bundle. For more info, check the links below.