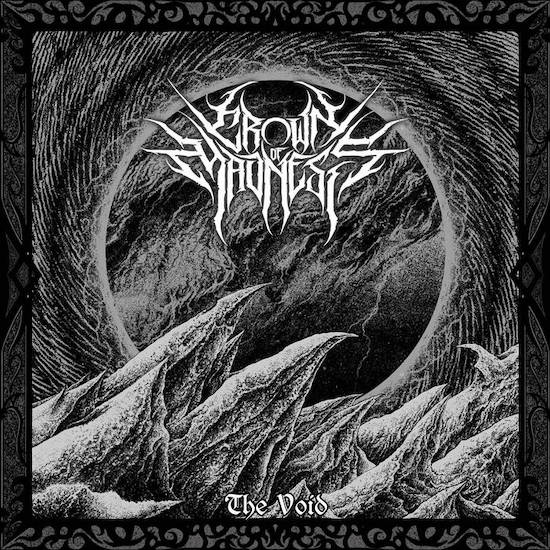 The origin story of British Columbia’s Crown of Madness is an interesting one, and we will eventually get to that, but we’ll begin by putting the focus where it most belongs today — on the song we’re premiering through a lyric video from this husband-and-wife duo’s debut EP, The Void.

In that song, “The Manipulated“, turbulence and discord reign supreme, from the booming and battering drumwork and jolting bass-lines to the head-bashing chords and the dissonant, maniacally skittering leads. The feverish, violent derangement in the anti-harmonious but technically proficient music is matched by the rabid ferocity of the growled and screamed vocals. But other unnerving sensations flow through the musical maelstrom as well. 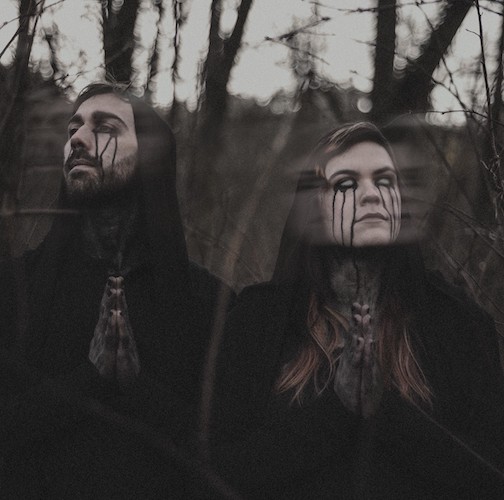 Weird, wailing tendrils of melody surface along with musing bass notes and mercurial fretwork maneuvers that seem to channel both bewilderment and a chilling otherworldliness. Eventually the hyper-speed drumming falls silent and resumes only slowly, and the dissonant notes ring and reverberate in ways that sound agonized and dismal, leading into a final sonic paroxysm of harrowing torment. As you’ll see, the words are disturbing as well.

And now for the back-story of this band:

Its two members (vocalist/guitarist Sunshine Schneider and drummer Connor Gordon) met each other on World of Warcraft back in 2008. As young teenagers, they shared a love for heavy metal and fantasy games, which is strongly reflected in their music. The duo later got married in 2015 and started writing in a more serious manner starting in 2019. They tracked The Void in their apartment, using an electric Roland drum kit and a Kemper Profiler. They’ve given us this statement about the new EP:

We put a ton of energy and passion into producing this EP by ourselves, making this release an incredible feat for us as producer / musicians and as a couple. It’s amazing to look back on ourselves as teenagers who shared a love for metal, and now being extremely proud of the music we created together. As cliche as this may sound, we want people to love our music as much as we do.

The EP includes piano performances by Claine Lamb on “Pale” and “False God’s Hymn”, and guest vocals by Kaija Krimson (Anarcheon) on “Anguish” (a song inspired by a dream that Sunshine Schneider had, in which Kaija appeared). The lyric video was made by Jade Weekes.

The Void includes fascinating cover art by Jois Cabe, and it’s recommended for fans of Ulcerate, Vitriol, Gorguts, Fallujah, and Black Crown Initiate. It will be released on March 25th and it’s available for pre-order now.

2 Responses to “AN NCS VIDEO PREMIERE: CROWN OF MADNESS — “THE MANIPULATED””