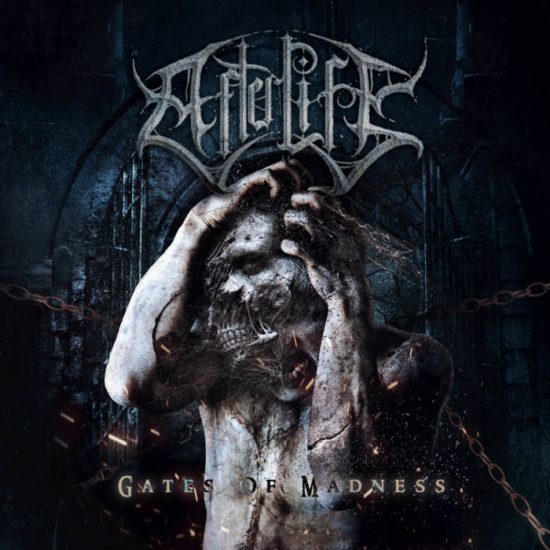 (We present DGR‘s review of the second album by the death metal band After Life from the Basque Country of Spain, which was released on February 14th.)

It’s never easy to tell which direction the yearly handful of riff-landslide albums is going to come from. The annual tradition of finding said albums is fairly predictable at this point, and sometimes if the gods be kind then the harvest will be good and we’ll have four-to-five of them on our plates. But the areas from which they’ll come are less predictable and there’s always a chance to get blindsided.

In this case the album arrives courtesy of Spain, the group After Life, and their sophomore album Gates Of Madness. Arriving six years after their first release, Gates Of Madness moves with an extreme sense of urgency and rarely – if ever – lets up. Appearances can be deceiving because at first glance you might see the band and assume you know exactly what you’re in for, then about a minute and a half into the first song After Life completely change form into something that could see them drawing comparisons to high-speed riff monsters like Cytotoxin, Murder Made God, the sadly split-up Kronos, and weirdly enough…Meshuggah?

If you want to know exactly where the thought that this was one of those non-stop guitar-riff-landslide albums first floated into the ether, take the song “Walls Of Delusion” as evidence. After Gates Of Madness gets moving with its title track – a relentless high-speed affair on its own that, as mentioned above, shifts into a mode more in line with the rest of the disc about halfway through – “Walls Of Delusion” serves to hammer that point home with an absolute death metal battering.

While the genre descriptors for After Life could float in between melo-death, tech-death, djent, and groove-metal, they’ve absorbed a whole lot of ferocity into the realm they currently inhabit; as a result, they are a little harder to pin down other than being reflective of a very fast and modern death metal scene. Case in point, the following song “Behind The Mask” makes it very clear after its initial ominous intro that dynamics can get fucked. It’s going to be a constant ass-kicking from moment one to moment thirty-six when this thing wraps itself up.

“Now where does this person get off dropping Meshuggah references in my blastbeat festival death metal album?” Well, that’s simple, because even though it’s an influence of After Life‘s that doesn’t show up too often on their second full-length, it’s hard to deny its presence in a song like “Architect Of Demise”. The band even have that mechanical guitar and drum tone down to a terrifying level of accuracy when that song starts itself up. Even the instinctive urge to headbang along to it kicks into play when that opening groove hits before the band settle back into that non-stop tempo that they’ve adopted for their second go-around. It’s a mode that After Life drop into throughout Gates Of Madness but they tend to favor the faster side of that spectrum. So it’s a lot more like Bleed fired off at hyper-speed than it is any of the slower, chunkier grooves one might find on Nothing. 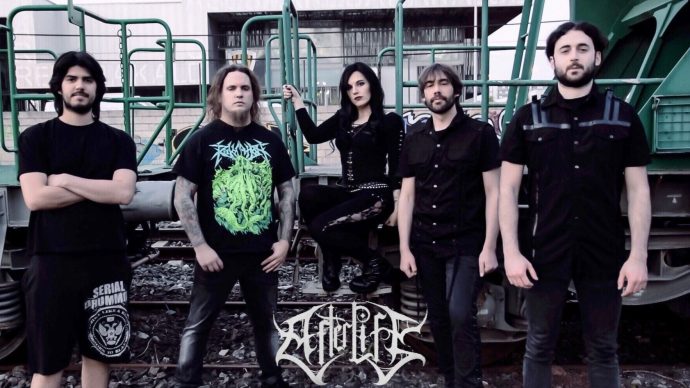 The neck-snappers of the back half of Gates Of Madness could be more of a random grab-bag among listeners. Since After Life spend so much time focused on this particular non-stop assault, most of their release has the air of being trapped under a hailstorm. There’s definite draw to a song like “Divine Immortality” with its big, imperial sound and chugging movements – which after the wall-to-wall throwing around that is much of Gates Of Madness comes as a fun diversion. Of course, like many of those sorts of moments here the band quickly throw that thing out of the room. Another credit goes to the frenetic activity of “Drowned In Memories”, which seems to want to phase through every one of After Life‘s genre-stylings in its three and a half minutes and leave behind nothing but scorch marks on the ground.

After Life‘s newest release is a fun snapshot of a genre in much wider flux than you might have expected. The group dart between so many different and closely packed sub-genres that the first handful of listens are breathless. This is the sort of release where everything has been so refined that even the track times don’t waver all that much – After Life‘s comfort zone is in the three-and-a-half minute to four-and-a-half minute range and rarely do they move in either direction outside of that blueprint. The band know what they’re doing and they stick rigidly to it.

With an album that has these sorts of songs tumbling down at you like a landslide,  there is usually one flaw that it doesn’t seem anyone has been able to dodge yet, which is that the songs can start to run together; the guitar pyrotechnics, rhythm section assault, and vocal stylings all start to blur into one monstrous mass.

Yet on so many albums like this one, when the songs are broken apart they’re all so strong you wouldn’t know where to begin with changing things around. It’s why it always seems like every one of these releases winds up with different ‘favored’ songs by people who have listened. When the music is that strong throughout, the brutality becomes the norm.

On that same thread though, these are the sorts of releases that quickly become default go-to’s throughout the year. You know what you’re in for and Gates Of Madness is great at delivering the sudden shock to the system that will power you through the rest of the day. It gets thrown on, you get blasted at multiple times, and often you’ll go for another spin because it is so good at settling into that non-stop groove so quickly. It’s an impressive second release.