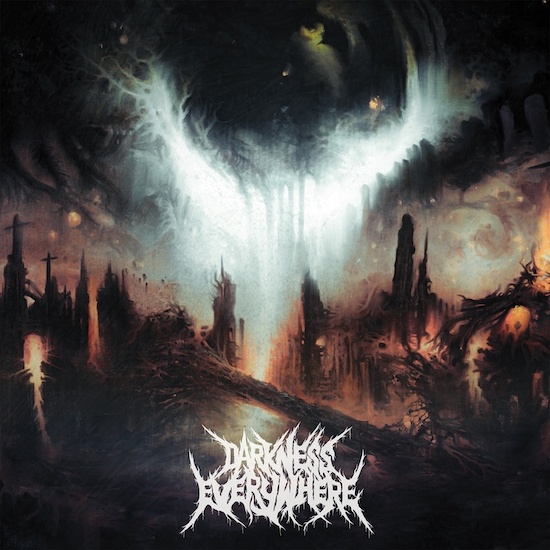 The band’s chosen name provides a clue to their vision, but the EP’s title, The Seventh Circle, is an even more vivid signal. There they point to Dante’s Seventh Layer Of Hell, where acts of violence in life are punished in death through endless torture and agony. Souls are immersed in rivers of boiling blood and fire, imprisoned in gnarled trees where harpies feed, and abandoned on scorching plains.

Darkness Everywhere take us to this hot and unhappy place through the paths of seven tracks, each of which has a fittingly hellish theme, and we’ll lead you through each of them ion our premiere of the EP today in advance of its release on February 25th. 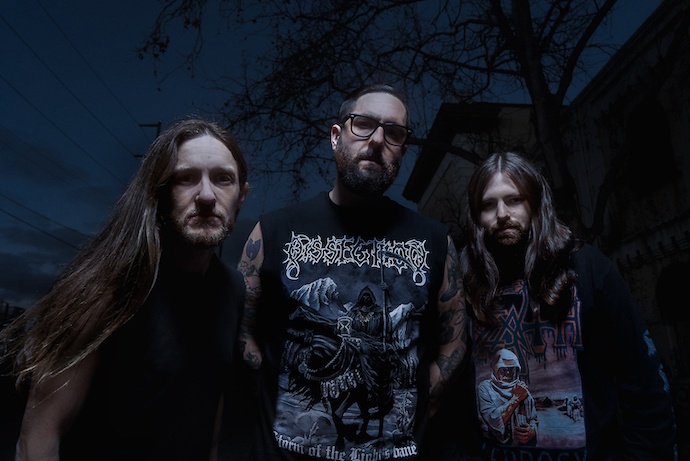 As our musical guides the band don’t waste time. After a scene-setting, minute-long, opening track (“Apocalyptic Nightmares”) they race through four tracks that are each in the sub-three-minute range and close with two more that don’t reach the 3 1/2 minute mark. But compact though they may be, the songs leave deep and smoking scorch marks on the mind, but not much wind in the listener’s lungs. In fact, they’re so damned exhilarating that despite the themes they’re life-affirming.

That opening track is an ominous overture whose heavy chords and symphonic layers draw back the curtain on misery which reaches as far as the mind’s eye can see. But with the EP’s eponymous second track the band begin to race, drums galloping, guitars darting and swirling, and the vocals spewing blood and fire in spine-tingling fashion. It’s an electrifying thrill-ride in which traditions of Swedish melodeath in the vein of early In Flames, At the Gates, and Dark Tranquillity come through, but feelings of frenzy and pain come through as well.

“The Grand Impact”, which includes John Henry‘s guest vocals, is even more maniacal and vicious — the drums going full-bore, the riffage jabbing in a fever, the vocals a sign of larynxs being ruined — but although the song is a wild careening and cavorting affair it also includes melodies that are dismally haunting and rise in fiery grandeur.

The band keep the pacing and the energy at a high level, from the pulse-pumping, neck-wrecking madness of “Lost Dimensions” through the blistering and blasting attack of “Reign of Chaos”, which includes an attention-grabbing guitar solo. 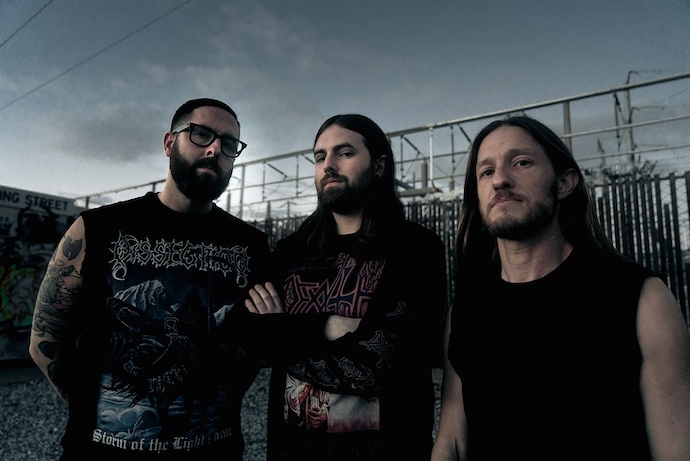 All of those first four full songs could easily have been made longer, and honestly, each one is likely to leave you wishing for a few more minutes. Fortunately, the hunger for more is at least somewhat sated by the fact that each succeeding song is such a heart-pounding, head-spinning experience.

The band do steal a few more seconds with “Survival of the Sun”, whose opening is perhaps the greatest display of awesome grandeur on the whole EP — before the band spin the intensity dial up into the red again. In that same track you’ll hear Laura Nichol add her own unchained screams to a song that becomes as grim and hopeless as it is adrenalizing.

Darkness Everywhere save the longest track for last, though that’s a relative term, because “The Seventh Circle” itself stops short of 3 1/2 minutes. This is the track that includes the guest appearance of Xavier, who sounds just as out of his mind as main vocalist Ben Murray. And if you think the band are going to ease back on the throttle just because the EP is about to end, think again. You’ll get a chance to breathe only after it finishes.

For fans of ripping, high-octane melodic death metal, this EP will be a fantastic discovery. And although we mentioned the names of the genre-founding Swedish greats earlier in this review, it’s also worth making comparative references to the likes of more modern bands such as The Black Dahlia Murder, Darkest Hour, and The Haunted. We’ll also share the thoughts of Cameron Stucky about how the EP came to be:

The Seventh Circle is the kind of album that Ben and I have been wanting to hear for the last twenty or more years. We both are very fond of the 1990s and early-2000’s Scandinavian melo-death scene, and before we ever sat down to write songs there was a clear vision to recreate the magic of that era as best as we could. Riffs, harmonies, and straight-to-the-point song structures are the hallmarks of this record, and I can only hope that fans of the genre will be satisfied.

The Seventh Circle will see CD and digital release this Friday, February 25th, through Ben Murray’s Creator-Destructor Records, with a vinyl version to follow shortly after. You can pre-order it now: