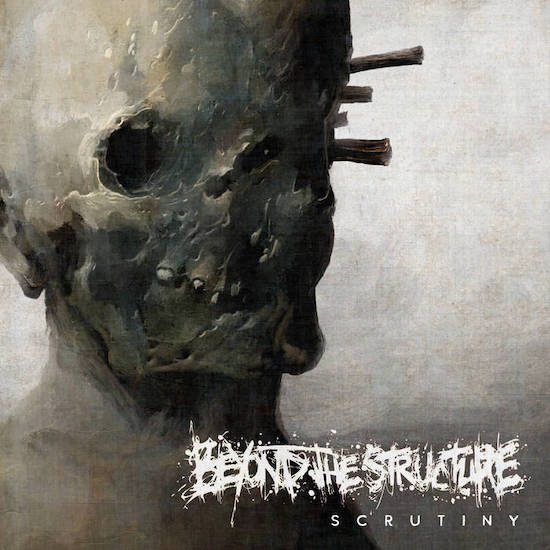 Almost eight years have passed since the Estonian death metal band Beyond the Structure released their debut album Nauseating Truth. In those intervening years the band did their fair share of touring and released a 2018 EP named Machine of Progress, and line-up changes occurred as well. But now the band are returning with a new album named Scrutiny that’s set for release on April 28th by Vicious Instinct Records.

The new album reveals a band who bring notable technical skill to their performances and display adventurousness in their songwriting, and their lyricism is thoughtful and relevant to some of the most distressing aspects of human evolution and the trials of modern life. They’ve explained that, thematically, the album draws upon the works of Jean-Paul Sartre, the Strugatsky brothers, and Viktor Pelevin in ways that “deal with the crisis of existential existence, mass psychosis, and the inevitable catastrophes caused by the actions of a consumption-based society”.

Those themes come through loud and clear in the lyric video we’re premiering today for a body-mangling, head-spinning album track named “Worms of Consumption“ Lyrically, the song portrays a world in which computer algorithms program human minds to implement social control and instill a desire for thoughtless consumption on a mass scale. Sound familiar?

The words come in vehement roars and wild yells, backed by music of multi-faceted sounds and moods. In the main, that music is turbulent and deranged, coming in high-powered surges of pummeling and jolting drums, growling bass lines, and riffs that slug and swarm. The slithering, roiling and leaping guitars generate dazzling sensations of ecstatic mayhem and bewildering confusion, and the soloing (which is the most eye-popping aspect of the song) swirls and screams in tones of piercing intensity.

There does come a time when the pile-driving punishment and mind-boggling guitar acrobatics take a pause (relatively speaking), and there the moaning melody becomes an encapsulation of misery and pain, but one of those startling guitar solos pushes insanity to the fore again, with sounds of agony at the end.

Scrutiny was recorded at Walter Productions Studios in Tallinn, Estonia by Are Kangus. It was mixed by Igor Ovcharenko in Samara, Russia and mastered by multi-instrumentalist and producer Colin Marston at the Thousand Caves Recording Studios in Queens, New York.

You’ll find pre-order links below, along with a stream of the album’s first single, “Profanation Of The Non-Existent“.