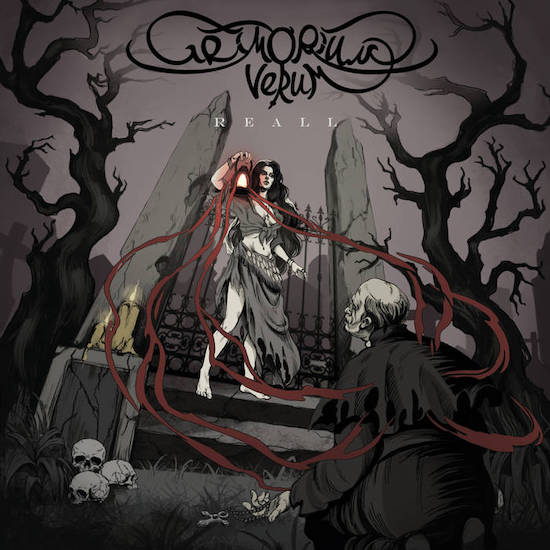 The Russian black metal band Grimorium Verum trace their origins to the mid-’90s, and since then have released four albums, with a fifth one, Reall, set for release on March 31st by Symbol of Domination. Not surprisingly, the band’s long period of existence has been marked by changes in their personnel, as well as alterations in their musical approach.

Where they are today is strongly represented in their new 11-track full-length, whose name holds to the band’s tradition of picking single-word titles that begin with the letter R. It holds to other traditions of the group’s music as well, maintaining aggressive power but now with an enhanced use of trans-dimensional keyboard parts that open the mind to visionary realms that don’t seem human or even earth-bound.

You’ll understand what we mean when you hear the song we’re premiering today, “Through the Labyrinth of Times“.

After the briefest time for haunting contemplation, this new song explodes in displays of truly astonishing light-speed drumming and electrifying waves of high-flying melody with a celestial sheen. But lest you think those shining and searing cascades of unearthly splendor are all the song holds in store, the band suddenly shift into rocking grooves and big head-moving chords. It’s a grim and primally compulsive shift of gears, but the ethereal keyboards return, along with scalding vocals and frenzied tremolo’d leads.

The music is thus capable of throwing you into a full-body lurch while spinning your head off into otherworldly dimensions. Futuristic electronic pulses surface along with gruesome roars, bursts of eye-popping drum-fills, rapidly jolting riffage and a spectacular guitar solo. The music generates feelings of frightening splendor, convulsive violence, and icy mystery.

The current line-up of Grimorium Verum is:

The new album is available for pre-order now. We’re also including the stream of a previously released album track, “In the Catacombs“, which is a free download at the album’s Bandcamp page.

4 Responses to “AN NCS PREMIERE: GRIMORIUM VERUM — “THROUGH THE LABYRINTH OF TIMES””