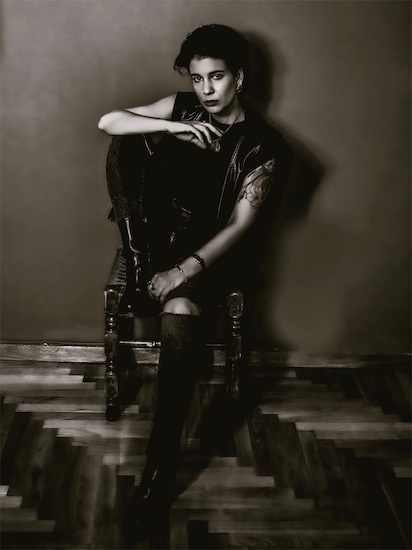 The Greek artist Ifigeneia Derizioti, who goes by the name IDVex in her occult musical project 1/2 Southern North, has a remarkable voice. Like an aural chameleon, it’s capable of changing colors in dramatic, spine-tingling fashion. It is the most compelling feature of 1/2 Southern North‘s debut album Narrations of a Fallen Soul, and not merely because her expressions are such a rarity in metal and metal-adjacent genres. It would stand out in any genre.

But we hasten to add that her artistry extends beyond those wide-ranging vocal talents. It extends to the conceptual and lyrical narrative that she and her collaborators have created for this first full-length, and to her songcraft, which itself ranges widely in style, texture, and mood.

In terms that would be familiar to metal lovers, she draws upon the influences of black metal, doom metal, and avant-garde music (she calls it the “Black Noise of Doom”), but as you’ll discover through the song we’re premiering today, her creations extend beyond the realms of metal. 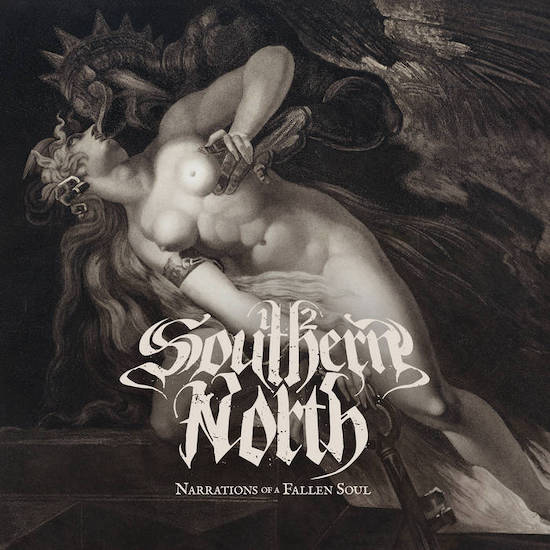 Conceptually, Narrations of a Fallen Soul is based upon ancient Greek tragedy, literature, and esoteric studies, summarized in this way:

The main theme of the album is the essence of the Death and the Soul, as the Spirit became free by Lucifer (the sacred Snake – Ophis). Death here represents the minor God “Thanatos” of the Ancient Greek Mythology, and he is the last lover of the maiden Soul, a “marriage” of eternity, the bitter inevitability of death and decay. The Soul accepts her destiny and free from the bounds of matter departs to the Moon, the ancient Mother of all.

To realize this vision in sound, IDVex performs guitar and bass on the album, and Chelys Lyre contributes synths and theremin (as well as lyrics). IDVex was also aided by a large collective of other guest musicians who performed drums, saxophone, violin, Davul, Kaval, and Dahare, and by Polytimi Noea, who provided ancient Greek lyrics.

The song we’re about to premiere features the last four of those contributions. The song’s name is “Hearts of Hades” (The Garden of Decay-The Underworld). It appears second in the track-list, after “Alpha Sophia (The Wisdom-The Knowledge)”, in which The Sacred Snake — Ophis (Lucifer) — sets the spirit free.

In the song’s opening, Kaval flutes wail in an eerie harmony above the pounding of the Davul and Dahare drums, eventually joined by mysterious chime-like ringing sounds. These sensations set the stage for IDVex to begin her narrative in a part-spoken, part-sung, part-whispered performance. Her voice ranges from vehement to musing tones as the collage of instrumental sounds swell and diminish. Sometimes her voice accompanies itself, and it rises to heights of electrifying intensity.

The music becomes a haunting and sinister dream, seductive but frightening, mystical and rooted in the mists of millennia long gone but still hovering in the shadows.

The track that follows this one, “Breastfeed Your Delightful Sorrow (The Death-The Lover)“, narrate the “marriage” of Thanatos and Soul — “The acceptance”. It happens that this song was the first one to be revealed from the album, and so we’re including a stream of it too. It provides a dramatic contrast to the one we’ve just premiered.

Eerie, hallucinatory, and menacing in its opening movement, the real heart of the song then reveals itself through the stunning vocals of IDVex. Here, her voice is enormously powerful and wide-ranging — soulful, bluesy, psychedelic, and frightening. There’s a big beefy bass and booming drums in this genre-bending avant-garde track too, along with chiming guitars and layers of other instrumentation (including a narcotic closing solo) that build an otherworldly yet beguiling atmosphere.

The entire album includes more than an hour of music spread across seven tracks, one of which (the album closer) is a stunning cover of Bathory‘s “Song to Hall Up High” from the legendary 1990 album Hammerheart.

Narrations Of A Fallen Soul will be released by Satanath Records (Russia) and Fog Foundation (Italy) in a jewelcase CD edition (and digitally) on April 8th, with vinyl and digipak editions coming on July 1st through the French label Les Acteurs de l’Ombre Productions.

The album ws recorded, mixed, and mastered by George Dimitrakopoulos at Bandapart Recording Studio in Kalamata, Greece. The cover of the album was edited by Paschalis Zervas +Wolframgrafik, Athens. It is the engraving by Moses Haughton (the younger) of the painting “Die Sünde, vom Tod verfolgt” (Sin Pursued by Death) by the painter Johann Heinrich Füssli (1796).