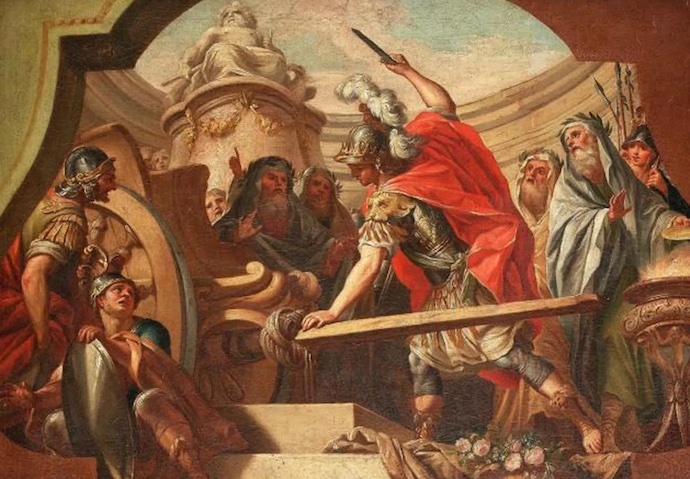 I cut my own Gordian knot by deciding to focus on advance songs (all of which were revealed just yesterday) from just one label’s forthcoming releases. It’s a special label, as anyone knows who has indulged in its many past releases. In December its future became clouded with uncertainty when the label owner (Luciano) fell prey to covid and was hospitalized in intensive care, with his life hanging by a thread.

Friends came to his aid in many ways, including Gabriele Gramaglia (Cosmic Putrefaction, The Clearing Path) and Diego Matejka (the man behind the ATMF label), who kept the Voidhanger Facebook page alive. Others (including me) held our breaths wondering if Luciano would survive.

After an agonizing month in the hospital he did survive, though he reports that he still needs weeks of motor rehabilitation to get back into, or near to, full shape. And now the dam of his debilitation, which held back the releases and the promotional activity of I, Voidhanger Records, has burst.

Which is how yesterday brought forth all these advance tracks in one fell swoop, and how lucky people like me suddenly found promos for all the records landing in the in-box like a meteor strike. All of them will be released on April 22nd, and all are now up for pre-order.

And so, with that long prelude completed, let’s turn to the music, with fond and ardent wishes to Luciano for a full recovery. 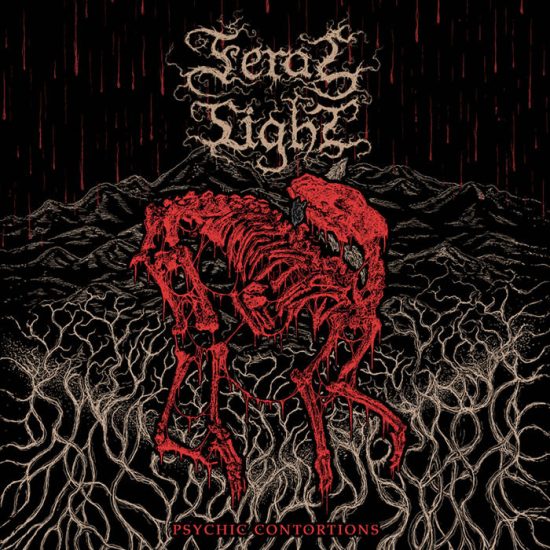 The first song is “Wells of Blackness” from this Minnesota duo’s fourth album Psychic Contortions, which features cover art and logo by Form Terror Growth. To quote from the promo:

“The record lives up to its title, it is a work full of pathos that arises from the contrast between corrosive atmospheres and the typical aggressiveness of black metal married to dark and smoky melodies that seem to tell of nightmares and bad psychedelic trips.”

Lots of things (both instrumental and vocal) are growling, gnawing, and screaming in this song, accompanied by astonishing bursts of percussive violence and waves of roiling fretwork madness. Somehow those riffs become addictive despite how unnerving and steeped in despair they are, and the song eventually slugs damned hard too. 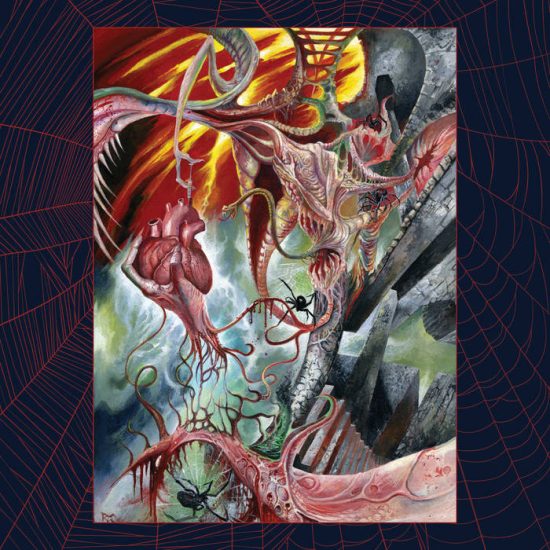 Now we turn to “Transcending Chronology Towards An Inexorable Future“, the first advance song from Sempiternal Mobocracies, the second album by this solo project of guitarist Derrik “Ghoul” Goulding from the monstrously fantastic Father Befouled. The cover art was created by by Raul Gonzalez. To quote from the promo:

“THOS ÆLLA bring together the epic black/thrash of Absu, the elaborate melodic phrasing of early Cradle Of Filth, the progressive heavy metal of Hammers Of Misfortune, the creativity of Dan Swano, and the aggressiveness of death’n’roll.”

The new track here immediately surges into a battering and blaring race, propelled by hammering drums and rapidly darting fretwork. The song feels explosively joyous, even though the vocals that rip through the eye-popping instrumental ecstasy are unhinged in their viciousness. 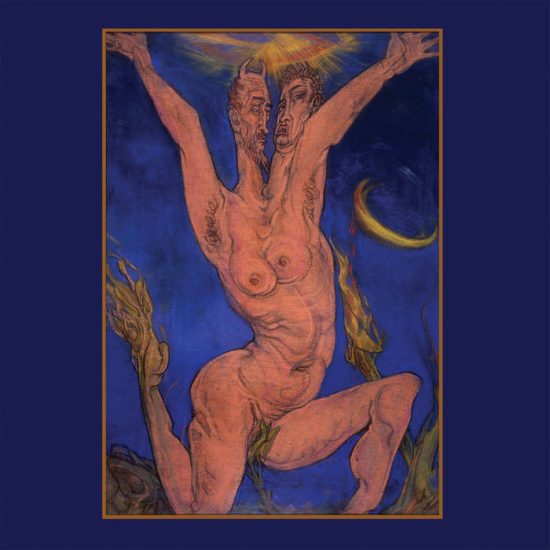 Now we come to “Volition” from The Whole Of The Body I Call ZOS, the third release by this Polish trio. The cleaved cover is a painting by Austin Osman Spare, the British occult philosopher and artist whose body of work forms the band’s inspiration. To quote from the promo:

“Focusing on automatism as means of creation, ZOS follow the thread of inspiration during intoxicating improvisations where psychedelic rock, doom and drone metal dissolve into lysergic melodies leading to inner bliss.”

The song is a wild and surreal experience for sure. The clattering drums and pulsing bass lines produce convulsive effects, surrounded by a mass of eerie, abrasive, and psychotropic sounds. Ghostly wails soar and quiver. The lead guitar warbles, swirls, and screeches, sending the music to heights of disturbing yet somehow seductive intensity. The drums silence themselves, a voice gloomily echoes, and the music drifts away into haunting and harrowing narcotic realms. 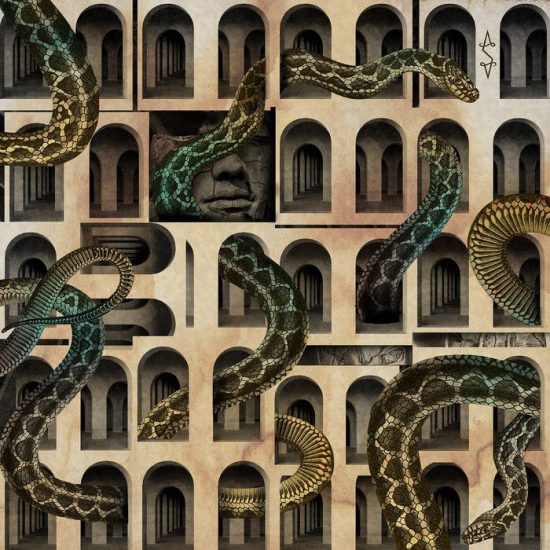 The line-up of this obscure band includes two men, and their new album Dom, w którym mieszkał Wąż (A House Where Dwelled A Snake) also includes the contributions of guests who perform on the contrabass clarinet and the bass clarinet. Credit for the cover art goes to Batosz Tymosiewicz (Katastrofa Stuff). To quote from the promo:

Requiem for wretched, frustrated faustian spirits. Dark doom occvlt funk infused with the blackest of metals. A frivolous reinterpretation of the faustian myth: an experiment in hybris and bleak quotidian magic ending up in revelation through self-delusion.

What does that really mean? In the case of this first song, “Gość w Dom (Guest Into House)“, it will take you 11 1/2 minutes to find out. Prepare yourselves for a very strange and dreamlike experience. To be sure, there’s a big clanging and clawing bass and interesting percussive beats that will engage your motor neurons, and the smoky and surrealistic clarinet contributions (and all the raw yelling) really won’t lull you. Yet it’s still easy to lose track of the minutes passing, and to be left wondering what the hell just happened to you by the end.

Last but not least you have “Light-Proof” from Inhumankind‘s second album, which features a painting by Frans Floris on the cover.

As you may know, this Barcelona band’s two principal creators perform flute, double-bass, and backing vocals. Eric Baulenas (Moonloop) appears as the principal vocalist, with Marcos Martins (Hex Arcana, Tod Huetet Uebel) as lead vocalist on one track, and the album credits include backing vocals by three other performers, in addition to piano contributions by Marco Mezquida. To quote from the promo:

After the underground success of the first album, which deconstructed and transfigured the metal genre in the light of contemporary music and free jazz, INHUMANKIND are back with Self-Deification, a new chapter in an avant-garde trilogy that is enriched with new nuances.

In fact, to the convulsive avant-jazz evolutions of Pablo Selnik‘s flute and Àlex Reviriego‘s double bass – the heart of the project – is added the elegant sound of a piano, played by none other than Marco Mezquida, one of the greatest European piano talents.

I think it’s fair to say that by this point in today’s collection your brain will have been well and truly scrambled. But just in case there’s some portion left uncooked and un-tossed, “Light-Proof” will finish the job. It sounds playful at first, but when the piano and the voices arrive the experience changes, becoming both sinister and seducing — but soon much more animated and head-hooking. The changes keep coming, the energy ebbing and flowing, the moods rapidly changing. There’s a repeating vocal refrain that really gets its hooks in.

This is one of those unpredictable avant-garde songs that sent me back to listen several times in a row, to fully grasp why it’s so fascinating — not that I’m able to provide a learned explanation.

3 Responses to “SEEN AND HEARD ON A SATURDAY: EXCERPTS FROM FIVE NEW ALBUMS JUST SET FOR RELEASE BY I, VOIDHANGER RECORDS”