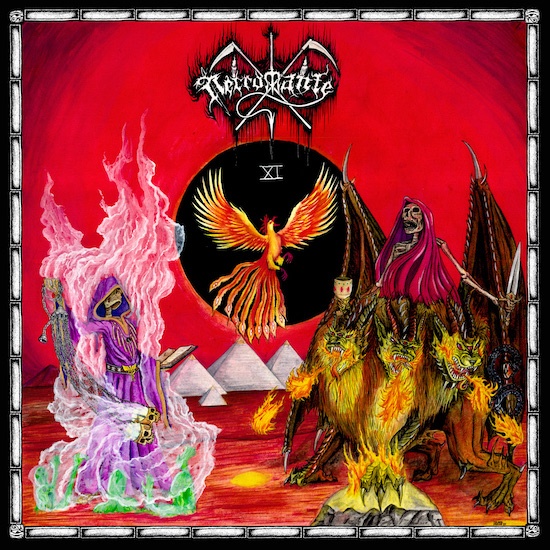 Most of our parents tried to educate us about the importance of first impressions, even the ones who didn’t seem to be very good about setting a useful example. Many of us didn’t take the lesson seriously, or tried and failed often enough that we stopped caring. Necromante, however, learned the lesson well.

The first track on their new album XI, “The Equinox of New Aeon“, seizes attention with a haunting melody of piano and strings and two speakers (one of them gloomily beseeching and one of them demonstrably demonic) fighting to be heard. Even people who don’t speak the language can make out the name “Lucifer”.

But this is only the first piece of their first impression, and they answer their own call with the rest of it when “Lucifer Rising” floods the senses with diabolical riffing that blares, jolts, skitters, and darts, backed by drums that pummel and clatter, overlaid with scorching goblin snarls. The aroma of sulphur is strong, the black magic is vivid, and Lucifer does indeed rise as the music itself rises in a vision of infernal grandeur. 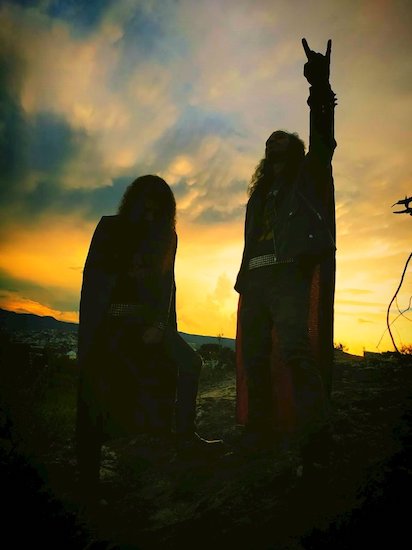 As a first impression, these two tracks leave no doubt about this Brazilian band’s devotion to sinister and scintillating music. The sounds are authentically devilish and perilously intoxicating, a formulation of black metal that’s not too abrasive but not too clean, not too precise but not too loose, a sweet spot that connects with ancient heavy metal pentagram traditions, gets stuck in the head, and still sounds both feral and arcane.

Those first impressions are strengthened by the remaining tracks on the album, each of which (other than a well-timed scattering of instrumentals) has its own core of strong riffs — riffs that are quickly infectious and that channel an array of sensations, further enriched by an extravagant array of fiendishly enticing leads.

As the band change tempos (which they do frequently) they move the moods of the music too, sometimes creating visions of blood-spraying ecstasy and sometimes putting a damp chill on the skin with sounds of supernatural menace.

The style of those riffs seems to reach back many decades to a time when heavy metal was just emerging, and the accompanying drumwork has a garage-band sound that stands as a rejection of over-production (but still does a damned fine job of getting a listener’s pulse jumping).

While XI is first and foremost a showcase of Mephistophelian guitar wizardry, Necromante also pick their moments to re-emphasize their infernal devotions in other ways, using piano and organ, including the creepy yet mesmerizing interlude of “The Phoenix Glory“, the dour and dancing Luciferian instrumental called “Pentacle of Fire“, and the morbid, melancholy, and mad gothic spectacle of the album closer, “Solve et Coagula – Astral Light To the Kaos“, which loops back around and connects to the opening of XI.

At their zeniths of speed, Necromante turbocharge the energy with wild soloing, nearly out-of-control percussive outbursts, and moments when the vocalist’s haughty snarls turn to raw howls. In more restrained movements, they practice a kind of spellbinding musical sorcery that exotically slithers and swirls. At no time do they relinquish the dedication to their mission: At all times the album feels like a fervent and often fiery offering to the glory of the dark lord who fell. And it never settles into a stultifying sameness. See for yourselves:

The cover art makes a strong first impression too, doesn’t it?

XI will be released on March 25th by Iron Bonehead Productions, and it will be available in CD, vinyl LP, and digital formats.