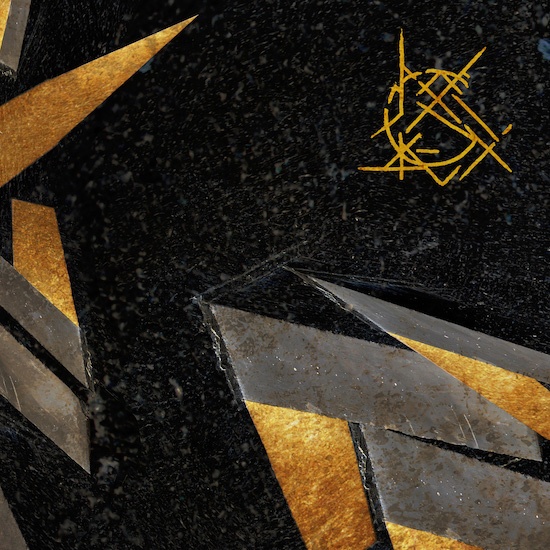 In their introduction to the self-titled debut album by the Belgian avant-garde black metal band Dissolve Patterns the Italian label Brucia Records recommends it for fans of Oranssi Pazuzu, Ved Buens Ende, and Fyrnask. For many of us, they really needed to say no more. Anyone who might make music that inspires such references would be worth checking out.

It turns out, thankfully, that those wonderful references are accurate, though other compass points also come to mind in following the album’s fascinating maneuvers (at the end of this article we’ll share an excerpt from another reviewer who drops names like Primeval Well, Feral Season, and The Silver).

The songwriting inventively mixes together ingredients of black metal, progressive music, and dark jazz, while also adding experimental accents. It does this in intricate and unpredictable ways, creating a musical amalgam that’s both elegant and assaulting, hypnotic and desperate, often steeped in melancholy and just as often calamitous. 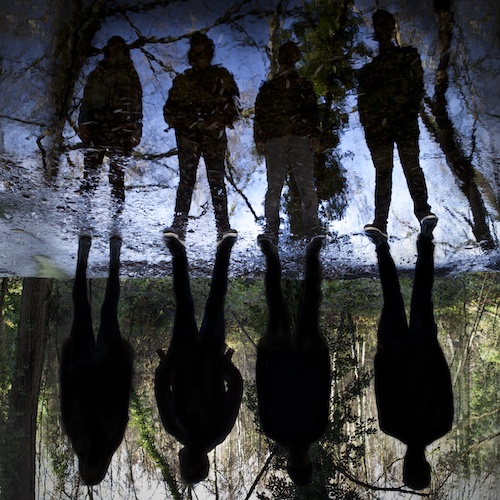 The instrumental and vocal ingredients are equally vital in making the album so fascinating. A cellist plays a very prominent role; the “feel” and nuance of the rhythm section are impeccable; the guitarists are accomplished in creating changing shades of emotional color; and the band’s three vocalists create a disturbing richness in their wrenching expressions.

You’ll get an arresting taste of all these qualities in the album’s opening track that we’re premiering today.

The song’s opening presents a vivid contrast between the rise and fall of eerily intriguing melodic lines and a heavy rhythmic punch that exerts a primal appeal. The guitars slash and chime while the bass bubbles and the drums rumble. The intensity builds, creating moods of wonder, tension, and torment, and the shattering vocals (which sound like a union of agony and fury) add to the intensity.

In the song’s mercurial course it makes a curve into a mesmerizing sequence in which cellist Annabel Van Eester takes over, creating a spell of mystery and sorrow (but still accompanied by the always terrific rhythm section, who bring jazz-like and progressive influences even more noticeably into their mission). The guitars begin to ring again and grim voices mutter, leading the way into a closing outburst of swarming and soaring riffage, animated bass lines, hurtling drums, and soul-scorching vocals.

If you stay with the Bandcamp player we’re installing, you’ll hear the immediately following track, whose opening segment immediately creates a sublime juxtaposition with the first song’s finale, linking arms with the style of the cello-led instrumental section in that opening track. It creates an enthralling invitation, and a building wave which then crashes and froths. But like the first song, this one is also persistently spellbinding despite the ravaging turmoil it reveals in different ways (and perhaps especially in the jaw-dropping pain and despair manifested so explosively by the vocals).

The band have shared this statement about what inspires them:

There are patterns emerging from chaos that give meaning. These patterns are observed because of a yearning to have order, to have coherence. They are, however, but an impression of the Real. These patterns merely reveal fabricated realities. Consequently, they must clash, dissolve and resolve.

Our music seems similar. We have an urge for creation and destruction in the music we make. Its patterns are fabrications, give meaning, but are only impressions. We dissolve them, rearrange them and fabricate new realities, more terrible and comforting than they appear. We are order in asymmetry. We are chaos in repetition. We Dissolve Patterns.

Dissolve Patterns was recorded by Viktor Walschaerts at Celestial Event Studio, mixed by Guillaume Van Rijckeghem, and mastered by Giorgio Barroccu for Evokaos (Brucia Records). The intriguing cover art was painted by Tonimeh.

On April 29th Brucia Records will release the album digitally and in a special-limited 6-panel digipak CD.

Yet another gem plucked from the hellish trees of heaven by the good people at Brucia. This time we’re delving into the desperate, anguished depths of black metal that is both majestic and small, overbearing and human. Fantastic atmosphere, great contrast and dynamics, uncompromising emotion, and just great, great stuff. Very much looking forward. FFO: Primeval Well, Feral Season, The Silver.

One Response to “AN NCS PREMIERE: DISSOLVE PATTERNS”