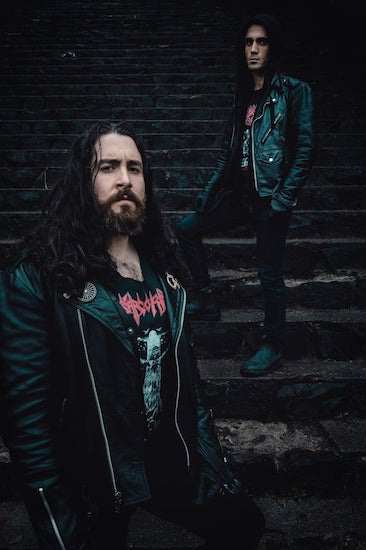 (We welcome Vancouver-based writer Hope Gould, who describes herself as “unconditionally committed to the underground, unreservedly devoted to riffs that fuck.” For her first NCS post she brings us this highly entertaining interview of Vancouver-based Egregore and a brief review of their forthcoming debut album.)

From the belly of Covenant, Canada’s Black Magick Inner Circle, Vancouver’s Egregore disgorge a potent elixir of Abraxian invocation on their debut album to be released by 20 Buck Spin on April 15th. On The Word of His Law, Egregore immerse those brave enough to traverse their bizarre labyrinth on a journey from the depths of evocative mental unrest to illuminating spiritual ascension.

The Word of His Law offers quality Black Death reverence in earnest, all while unravelling a masterclass in the unorthodox with unsettling synth, hypnotic chanting, and supplication by way of a Neo-folk passage. Emotive solos and leads are on dazzling display by guitarist and vocalist ESSENTIA COLLAPSE on tracks like “Howling Premonition” and “Libidinization of Will Azothic”, backed by utter percussive gluttony wielded by CATASTROPHE SATURNA.

Equally arrayed are riffs that groove and writhe with reckless abandon and thrashing chops that will delight enthusiasts of classic acts such as Mortuary Drape and Mystifier. This debut truly has something for any underground occult metal fan, should they prepare their minds for an intoxicating voyage.

To herald the manifestation’s imminent advent, it was my distinct honour to have interviewed Egregore to discuss the debut and a bit about their conjuring process. I am delighted to say it gets weird: 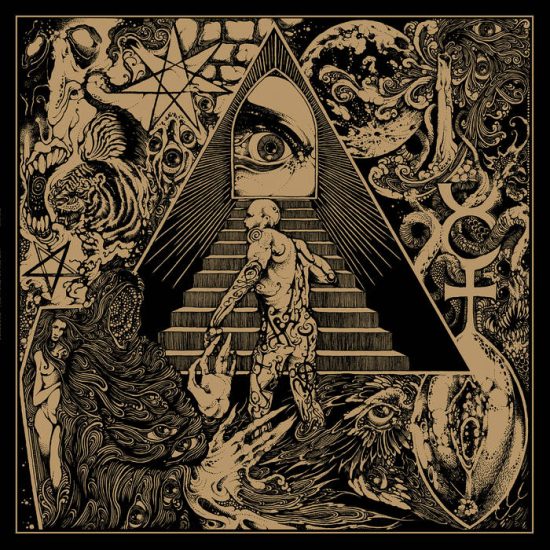 Firstly, thank you very much ESSENTIA COLLAPSE and CATASTROPHE SATURNA for the opportunity to discuss the violently spewed-forth and mysterious entity known as Egregore. It is certainly an honour to chat with you both, simply for all the Covenant Circle does to invigorate the Vancouver and Canadian scenes with some of the most compelling death and blackened death metal around. Egregore is sure to be no exception. To get started, how would you define the sound you’ve carved out on The Word of His Law?

And thank you for a wonderful introduction. If only we could have such an entrance everywhere we go.

Somehow this is already not the first interview in which we’re expressing this sentiment, but I’m not sure we would bother to define this sound. We could only, at best, crudely pigeonhole what we’ve made, were we to try to summarize it with words.

Thematically, I’d say that magic, alchemy, and spiritual ascension are important for the majority of the projects you’re both involved in, such as Mitochondrion, Auroch, and Night Profound to name a few. How did Egregore come to be and what are you hoping to express from it that you might not have with other projects?

Thematically I’d say that magic, alchemy, and spiritual ascension are important for the whole of the human species, but for whatever reason they are more focused on ephemeral things like conquest, power, and pizza.

Egregore came to be because at a certain point you stop pushing against things and start following the flow of them. We’re not hoping to express anything. We’re going off instinct and seeing what happens. We’re trusting our intuition to lead the way, and we’re just following along. Perhaps the main difference is that we’re no longer arrogantly thrashing around in the dark, pretending to know what’s what. We don’t fucking know shit from shoelace, and we hope that really shines on this album.

Without intending to rehash or diminish the devoutly crafted lyrics of the album, which certainly deserve time to be absorbed, could you share just some of the non-musical influences that inspired the songwriting process of The Word of His Law?

That’s a very difficult question to answer succinctly, as non-musical influences on music are often very intangible, but atmospherically speaking, there’s a couple periods in time we find ourselves going back to in the writing process, whether for historical importance or because of their aesthetics, namely Palestine of old, 1890s Paris, 1920s New York, the golden age of Piracy, and renaissance Italy.

What was the music composing process like for Egregore? A keen listener would hear both of your influences effervescing; The synth on the intro track is reminiscent of the Saturn’s Cross project and the lovely neo-folk on “An Address to Abraxas” wouldn’t be at all out of place on a Night Profound release. How do these ideas begin to meld in the creative process to form something so cohesive?

Well, we sat down and agreed that we wanted to create something akin to early Slayer playing at a Bohemian absinthe soiree taking place in a lavish, 14 story opium den.

You are, of course, not invited, and should never have made it upstairs, but you’ve found yourself there anyway, thanks to the laissez faire attitude of the doorman who was too busy getting chummy with the girl taking coats to see you sneak by.

The decor of the apartment looks like it was stolen from the Louvre (because it was), and the people in attendance reek of weird perfumes and caviar. After finding yourself in your third painfully sexual conversation of the evening, you make a weak excuse to the offending pair (an elderly couple with provincial accents) and see yourself to what you believe to be the bathroom.

You find yourself in a room of deep red light with no door back. The walls have giant mouths with huge fucking dicks where teeth should be, impotently colliding and tangling together like day-old spaghetti as the slobbering maws voraciously open and close. Soaking wet vaginas contract and expand across the ceiling and floor, ejaculating sickly fire as clanging chains perilously whip around where pubic hair would be.

At the back of the room, there is a beautiful man being mercilessly tortured by hideous oppressors. Your instinct tells you he is an angel, but you don’t really know what that means. They mutilate his flesh and fuck his ass with a pearlescent scepter that you never see the top of (because it’s in his ass). You vomit all over your shoes (and they’re suede, so that shit is never coming out) and just in the final moments before you lose your fucking mind, the angel locks eyes with you. He’s so placid, so clam, so serene. A voice enters your head.

“We’re getting out of here.”

And then you realize they’ve fallen into his trap, and this is the middle stage of an intricate and circuitous plan for revenge. This being answers to a higher authority and his methods may not be questioned.

You had the opportunity to work with some incredibly talented folks to shape The Word of His Law visually and sonically, including Xavier Berthiaume of Tehome Productions. Xavier, aside from being a masterful producer, certainly speaks to similar themes in his own expressions with his band Gevurah. How important is it to you to work with like-minded people?

Yes, it’s extremely important, of course. We knew that everyone we reached out to and asked to contribute could be trusted to add interesting scope and vision to the record in their own capacity.

In great anticipation for the debut on April 15th, what else can we expect from Egregore?

Let’s not skip ahead yet. The first chapter matters as much as the rest of the book.

“Infer from this what thou wilt, but I have been reborn as the word of his law, to the letter, to the T and the potency of the quince. Spit thine teeth in to thine hand, and in splendour count them.”

The Word of His Law will be released on April 15th and can be pre-ordered now on CD, Tape, and LP at 20 Buck Spin and digitally on 20 Buck Spin’s Bandcamp page. It features cover artwork by Karmazid (Skaphe, Urfaust, Stormkeep), additional artwork by Lupe Vasconcelos (Spirit Possession, Auroch), and layout by Cold Poison.

One Response to “AN NCS INTERVIEW AND REVIEW: EGREGORE”