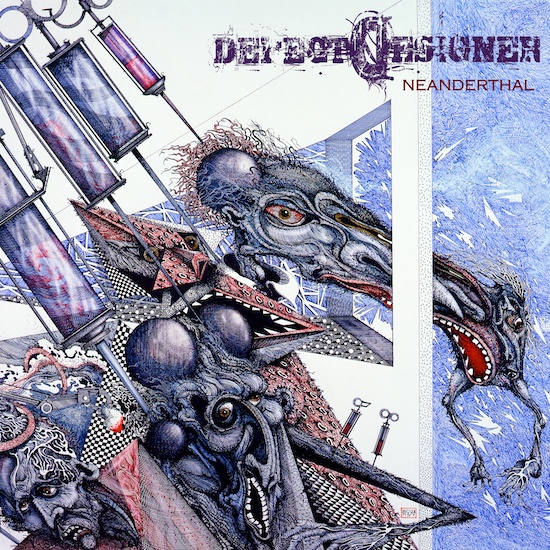 Anyone who has dabbled in the discography of either Diskord or Defect Designer, who share a pair of members, know that both of these Norway-based bands revel in severely discombobulating their listeners, and beating them almost senseless.

At the risk of our own sanity and skeletal integrity we’ve done our own fair share of dabbling across their releases, and have always come up wildly smiling, albeit through broken teeth. And so the news of the first Defect Designer album in seven years, following on the heels of Diskord‘s own 2021 full-length (reviewed here), set our nerves a-tingling.

Sure enough, it’s a goddamned bonanza, and so insane that it makes Ian Miller‘s  bizarre cover art seem understated and entirely intelligible. The name of the album is Neanderthal, and from that album we’re really fucking delighted to drop a brain-bomb on you named “Trolls“. 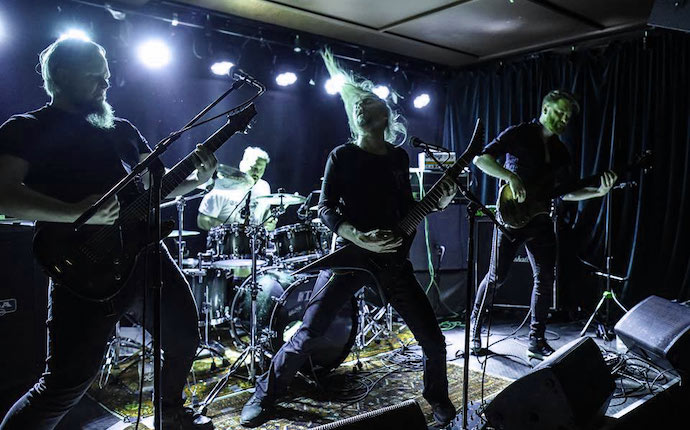 The music you’re about to hear is a mutated and marauding amalgam of grindcore and death metal that’s as relentlessly head-spinning as it is viscerally obliterating. The music moves like a charging phalanx of barbarians — if the barbarians were also mad scientists simultaneously cooking up some intricate and bizarre new invention at the speed of a wildfire.

Astoundingly for such a breakneck and abrasive barrage, you’ll quickly figure out that the song’s production allows you to notice every one of the rapidly moving parts, from the scathing, shrieking, blurting, and blaring guitars to the wild burbling of the bass, from the maniacal battering of the drums to the rabid barking, savage growling, and deranged yelling of the hostile vocalists.

At first you may just be overwhelmed by the madcap exhilaration of the experience. But half the fun of this macabre escapade is running the gauntlet again and again, because the song is so elaborate in its unhinged cavorting that you’ll pick out something new each time, and with each listen it just becomes more fiendishly infectious.

Neanderthal will be released later this year by Transcending Obscurity Records. We expect that pre-orders will open soon. For more info, keep an eye on the links below, and by all means, expose yourself to “Luddites“, another track from the album which emerged late last year (we’re streaming it after the links).