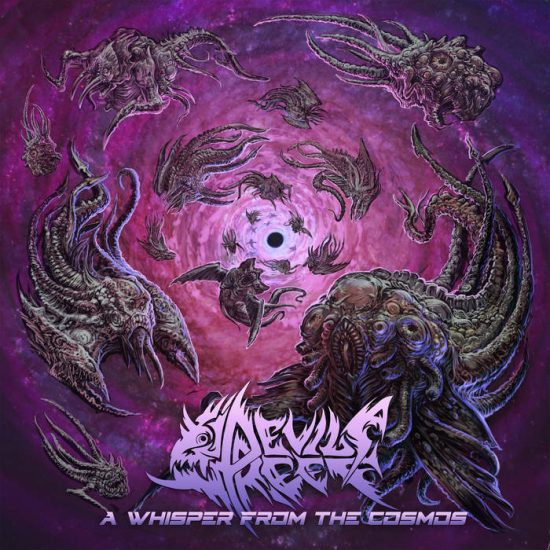 There’s definitely some interesting stuff happening on A Whisper From The Cosmos. It seems that in the span of time between the two releases this year Devils Reef have really leaned into their influences and drew from a well that could see them being compared to Revocation and Alkaloid almost immediately. Makes sense then, that if you have a peek at some of the recommended releases by the band on their Bandcamp page, you’ll spot both Alkaloid’s Liquid Anatomy and The Outer Ones by Revocation among others. 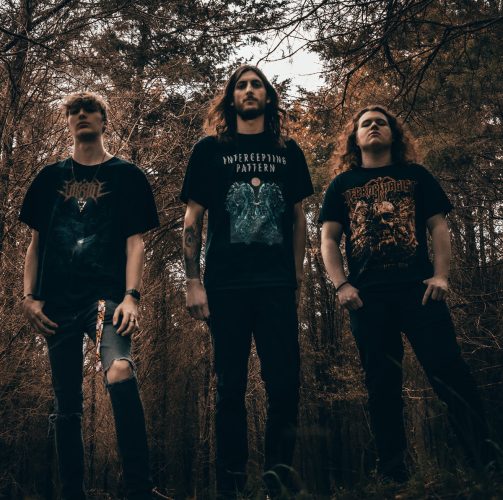 Given that A Whisper From The Cosmos is an EP though – only the second one in my recent giant review pile – every song on this release is an amped-up version of the band’s sound. The opening track, “Quantum Strings”, reads like someone translating a physics book into metal song lyrics – much in the way Scar Symmetry have played at that over the course of their career – and musically it has Devils Reef in that same sort of amorphous genre sphere where the aforementioned Revocation camp out.

Partially death metal, partially tech, very circle-pit thrashy at times, it’s a very fine dance that the band have to perform on a very thin wire in order to keep themselves from falling fully into one style and failing the ‘master of all trades’ act. The second and third songs; “A Whisper From The Cosmos” and “Plague Uncovered”. are the crushing death metal songs in the mix. “A Whisper From The Cosmos” is obviously a little more space and synth tinged with some minor vocal effects coming along for the ride in a six minute prog-adventure, whereas “Plague Uncovered” is the blast-furnace circle-pit bludgeoner of a song.

“Plague Uncovered” might be the personal highlight on this end, but we’re fans of anything that is content to drive us into the ground like a fence post. “Ankida” is the guitar-riff avalanche but also the one where you even get a minor taste of some Gojira chug in its opening bit, which certainly perks interest in between the increasingly tech-showcase happening throughout the song.

A Whisper From The Cosmos is Devils Reef filtering all of their influences into their own style, fusing groups together and yet still making it so that each element is recognizable. You’ll almost feel psychic at times when it seems like you can predict where parts are coming from and where they’re going, but there’s also credit to be given that such a young project is already at this point, and it wouldn’t be shocking to see the next couple of releases from the band really hit high-gear. Their first few releases have been very promising, even when I can recognize damn-near everything the group are pulling from and why it appeals to the Pavlovian response part of my brain. 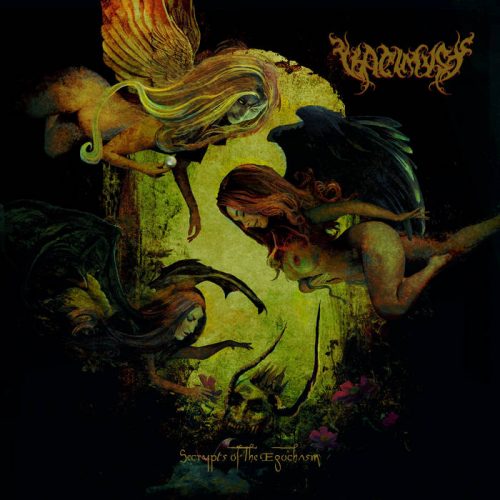 We’ve had our eye on Vaelmyst for some time and I’ll admit it’s partially my fault since I’m the one that covered their debut EP Earthly Wounds all the way back in 2018. It’s a compliment to the execution on the gothed-out melodeath of that EP that the three-year gap between Earthly Wounds and the group’s full-length album Secrypts Of The Egochasm felt a hell of a lot longer than it actually was – especially given the earlier review of Be’lakor in this collection and the five years and change gap between their two releases.

Vaelmyst hail from Southern California but the music is difficult to describe, mostly because it’s been hard to tell where Vaelmyst were going to go with their full-length aspirations. They’re a hybrid of multiple genres, taking some recognizable melodeath music and whipping it through a vortex of black metal and cavernous doom at times, and coming out the other end sounding like a different vortex of styles altogether. Secrypts Of The Egochasm sounds like a melodeath band trapped in a dark chasm of their own, but with a trained ear for infectious melodies and surprising genre-turns throughout the EP. It’s the only way I can realistically describe the hollowed-chasm production style here, with the band sounding like they’ve stumbled upon some old school death metal tapes and decided to see what would happen if they dropped a d-beat riff or two in between the speedier riff work.

That’s a main source of the fun with Vaelmyst’s first album — getting to witness where the band will take their talents next. It seems the group had a whole array of styles and influences available to them and eventually decided on the ‘fuck it, let’s go for it’ method. So while you may have a little difficulty pinning down where on the big wall of melodeath the band may be as a whole, within individual songs you get to hear all kinds of differing melodies and leads, a clear ripping solo or two – even in the middle of a moodier doom passage – plus chunkier riff work and occasional outright brutality. 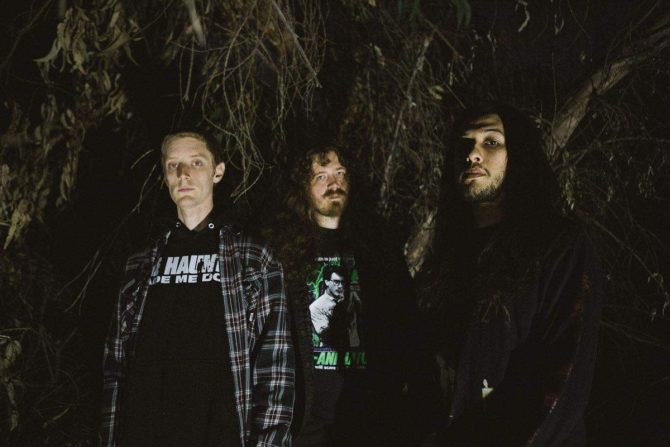 The way “Spineless Throne” opens is almost like a speed metal group and a black metal band got into a fist-fight before merging into something completely different, whereas “Ghoulish Delight” basks in the atmosphere that the five songs prior to it have spent their time building up to. It’s still a faster song in the vein of everything before it on Secreptys Of The Egochasm, but it’s also the first song with a bit of a breather before it spills fully into a galloping guitar part. Save for the “Into The Egochasm” bit of quiet introspection that leads into the seven-plus minutes of “The Coin Of This Realm” – where the band really flex their musical muscles in closing things out — Vaelmyst are content to have each of their songs be furiously fast, where the drumming is just constantly pounding away in the background.

And yes, that even leaves room for one traditional barn-burner of a track where the loftier five-minute and six-minute ambitions of earlier songs are left in the dust in favor of scorching earth, which is where “Envenom The Sea” comes in. One of the highlights of Secrepts Of The Egochasm, it’s the song where Vaelmyst let loose on an album that has seen the team of Jonathan V, Ronnie Lee Marks, and Wyatt Bentley letting loose already. “Envenom The Sea” is the band crashing up against rocks over and over, breaking everything before it into a fine powder. Honestly, it’s nice to have one song on here that has the band in microcosm if needed to explain where the faster death metal influences of the band’s sound are coming from.

Secrepts Of The Egochasm is a surprisingly adventurous full-length from a band who are pulling back the veil – hold your applause, please – on a vast swath of different styles available to them in service of pitch-black atmospheres and death metal cauldron mixtures. If you’re interested in a strong melodeath throughline carving its way through a band where you’re not quite sure where the next guitar line or bellowed scream is going to come from, Secrypts Of The Egochasm is worth the dive. 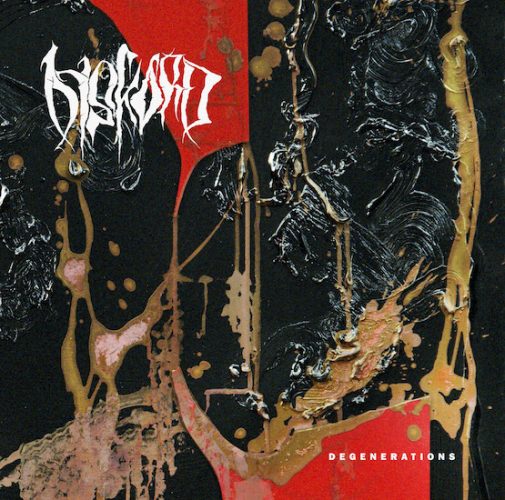 Why not close out this multi-part review affair with one of the more intentionally ugly and noisy albums in the recent months that gave birth to this collection. You don’t get to name your band Diskord or your third album Degenerations and not create expectations that the music will sound like instruments being thrown back and forth to bounce off the walls. And sure enough, this mid-August release by the Norway-dwelling group (via Transcending Obscurity) is some of the most mind-shearingly abrasive stuff out there.

So even the first song “Loitering In The Portal” already feels like almost three minutes of having pallets of cement dropped on you – which makes the thumping bass intro of “Bionic Tomb Eternal” following it seem even more out of left field. Given our general admiration for chaos made into musical form and the fact that we had the opportunity to premiere “Dirigiste Radio Hit” all the way back in July, you can see why Diskord might’ve landed on the No Clean Singing musical radio – even if we took what could charitably be called our sweet-ass time getting around to it.

Each song on Degenerations is its own experiment in musical madness, and it is experimentation that is not meant to be taken lightly, because the sheer g-forces from the band throwing the listener around alongside their instruments from one end of the room to the other could likely pulverize bone and leave someone a jellied mess for a while afterward. Degenerations is definitely not one of the friendliest releases in this review collection, and one glance showing almost seven years between this release and the EP Oscillations prior to it makes it seem as if the band spent the whole time trying to figure out new ways to keep everyone on their back foot for the entirety of the forty minutes Degenerations asks of you. 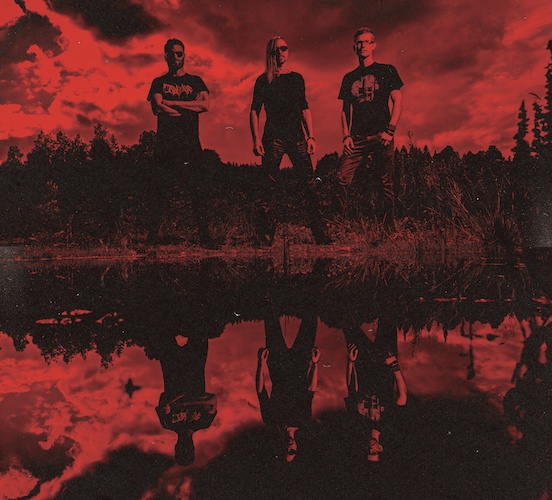 When the cover art for every one of your releases looks like the chaotic splatter painting of someone finally unleashed, it’s easy to see where the music Diskord are launching comes from. The part in the album credits on their bandcamp page where the group’s bassist is also credited with playing an electric upright bass, cello, theramin, and synth could raise an eyebrow at first, but after a listen to the album there’s just a knowing ‘that makes sense’ nod afterward.

The wall of dissonance is constant within Degenerations and there’s always some different thing that is going to grab your interest if you aren’t just constantly feeling assaulted by a three-pronged vocal delivery. I’m pretty sure someone snuck an occasional woodblock hit into “The Endless Spiral” about halfway through that song, but the constant way that song is attempting to overwhelm you means I could also just be musically hallucinating – which again, given how Diskord are effectively recording musical madness, makes a perfect sort of sense. “Lone Survivor” even had me thinking that the band had somehow morphed into one of Antigama’s more noisy atmospheric moments for a brief second before “Dragged For Coronation” pressed that idea into a fine paste over the course of three minutes.

Degenerations ties so many different genres together in service of chaos that it’s impossible to try to latch on to one thing. It’s something special when you’re left with the sense that you have no idea how the hell you’re going to describe something, other than that you feel like you’ve been sandblasted into dust by the time it’s done. Degenerations is constantly knocking you over, again and again, and if you haven’t take some time out to listen to it in the three months since the album’s release, now is a fantastic time to rectify that.