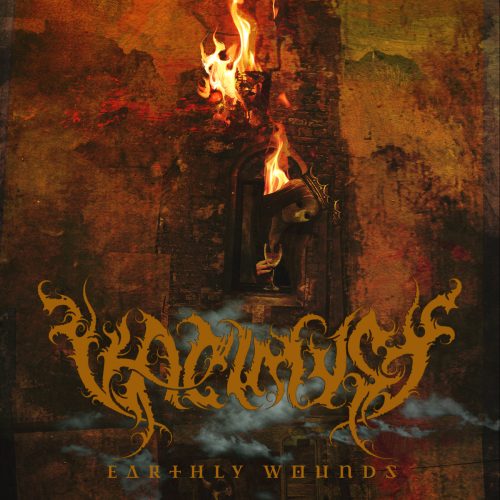 (On February 14th of this year, Vaelmyst released their debut EP, with cover art by Travis Smith, and now we present DGR’s review of this promising first release.)

This will always be something of a private entertainment given my residence in California, but sometimes the location of a band and the music they play can prove to be equal parts interesting and amusing. When you think of Southern California, oftentimes you get the gussied-up, made-for-tourism brochures-picture of the area in your mind. The usual checkboxes: nice weather, attractive people, palm trees galore, and glorious views of miles-long beaches. What you don’t expect are the heavy metal groups that appear from time to time with a distinctly European flavoring.

While that region doesn’t have a monopoly on the sound, you’d be forgiven upon listening to Vaelmyst’s first EP, Earthly Wounds, for assuming their location is somewhere a little bit more melancholy and with a whole lot more snow, rather than the wide concrete expanse of Los Angeles.

The new band, which counts amongst its members Ronny Lee Marks, Tom Warner, Jeff Martin, Jonathan V (artist-behind-the-curtain in a variety of Fredrik Norrman projects, the recent October Tide, for instance), and session drummer Mike Ponomarev, traverse multiple spheres within the melodeath genre on Earthly Wounds, with each of its five songs drawing from different inspiration than the one before it. Earthly Wounds has a solid through-line, but the different prongs of it point in multiple directions, which gives the sense that Vaelmyst are still trying to zero in to one overall sound.

Once you’re past the prologue of Earthly Wounds — which for a brief moment made me think I was about to listen to a movie trailer, given the echo of its sole opening piano note — the sense that Vaelmyst are trying out a variety of different things starts to set in early on. But it is when you reach the ending pair of songs “In Darkness, In Tongues” and EP closer “Dear Esther”, and how they contrast with one another, that Earthly Wounds feels like a collection of singles more than one trip. The four songs after “Prologue” all work well within their chosen flavor of melodeath, and a bit of the fun in listening to Earthly Wounds can be found in picking out which pieces Vaelmyst have chosen to use in constructing each song.

Walking backwards — since most people will be most familiar with it as the lead-off single for the EP — “Dear Esther” is the moodiest of the five songs, hybridizing a speedier death metal approach with the melodramatics of a doom song. It doesn’t reach for a glacial pace but instead combines that recognizable vocal misery that seems to tumble out over itself with a cavernous recording that has a sharp sense of death metal groove, which comes to define the song. A guest solo by Fredrik Norrman keeps things interesting to help close out the headbanging affair.

This of course is in comparison to the song before it, which leads off with a gloriously cheeseball hair-metal throwback for its opening segement, including a bona-fide pyro hit that lines up alongside the thunderstorm sound effects that open up the song. The fun part about “In Darkness, In Tongues” is the sudden shift into a thundering double-bass roll after its opening verse, which brings the song more in line with something recognizably melodeath.

That opening segment is enough to leave a listener with bewildered whiplash as you think you’ll have settled into a groove after the hammering chug of “Watchers”, which is one of the times on Earthly Wounds where you can pick up something of a keyboard lead that lies behind the guitar’s lead melody. “Watchers”, given its five-and-a-half-minute length, is also one of the more densely packed songs on the EP. Again, given the elements that the song is built out of, including its bouncing chug of a rhythm riff and the quicker and more frenetic melodies that work their way throughout the song as a whole, it feels like a wholly different song from its siblings on the EP.

Vaelmyst are off to a strong start and Earthly Wounds shows a lot of promise as a debut EP, one which demonstrates that whatever direction Vaelmyst might choose to pursue from here on, they’re likely to do an excellent job. “In Darkness, In Tongues” is a lot of fun when it isn’t serving up a whirlwind battering of drumming; “Watchers” is the guitar-centric melody song, full of different leads to discover; “Dear Esther” has an undeniably headbang-heavy groove to it; and “A Smothering Of Moths” is another hefty song that combines the frenetic guitar work of “Watchers” with Earthly Wounds’ headbanging closer in a way that keeps things moving at a rapid pace, and has the first two songs seem like they come from an entirely different era of the band.

As fun as it might be to speculate about how future material may sound, Vaelmyst find themselves with a handful of very strong options. Earthly Wounds never quite settles in on one specific sound, but wherever the group head in the future, it will be worth keeping an eye out for.

One Response to “SHORT BUT SWEET: VAELMYST — “EARTHLY WOUNDS””