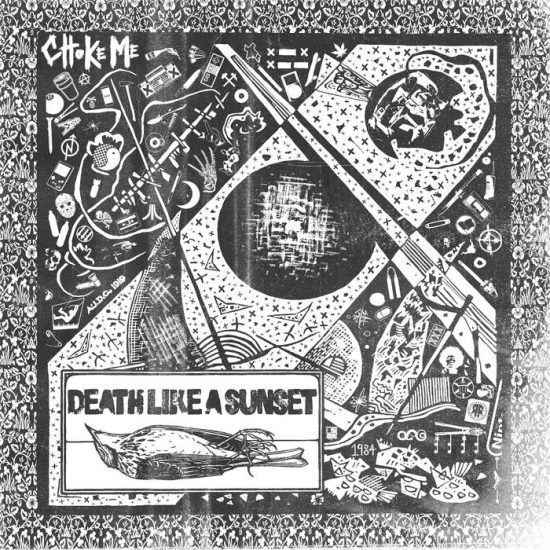 We’re probably a few months out from suffocating under an avalanche of splits and single releases if the patterns hold true. April 1st saw the release of the latest music from Choke Me, seemingly forming out of a static-charged aether into one quick explosion under the name of Death Like A Sunset, and like its immediate predecessor in late 2021’s Hauntology it discharges another six songs and sub-twenty minutes worth of music.

In actuality, if the quick napkin-math on the track times is accurate, we are looking at an EP that clocks in at sub-fifteen. Perfect then for the tagline of ‘short but sweet’.

Well, it’s to provide some perspective of just how fast the Death Like A Sunset rocket sled is this time, since the only song that even flirts with getting into the three-minute range is the third track “Be Normal” at 2:51. Everything else is two-thirty or shorter, so a run through Death Like A Sunset plays out like Choke Me just rapid-launching songs at you with nary a start/stop motion in between.

You fade out on feedback, fade back in on feedback, and it’s off to whatever fire-licked chaos may be in mind for the group this time. If you’re the type who enjoys an expulsion of musical fury, then Choke Me have a whole lot to unload and they do so with enough time that you’ll likely be deep into round two before noticing the first pass even finished.

Where Choke Me excel is the hyper-fast and blast-heavy sub-two- minute track. It’s where things really worked for them on The Cousin Of Death and Hauntology and they haven’t lost sight of it on Death Like A Sunset. Album opener “Pariah” demonstrates that, and they’re not afraid to dip into their bread and butter time and time again throughout the other five songs present.

Where things are a little more interesting is the apparent bounciness a few of their riffs have adopted on Death Like A Sunset. They’ve been favoring a groovier and punk-bouncing hardcore approach a bit, and the strains of it were noticeable on Hauntology but they really come into the spotlight on Death Like A Sunset‘s longer songs – again, perspective here, longer translates to sub-three minutes. You’ll hear it in both “Be Normal” and “Black Hole” and even during the brief moment of “Prisoners Of Conscience”.

Thus, it seems like Choke Me‘s musical world right now boils down to hardcore pit riffs with some serious bounce, a two-front vocal attack, and then setting everything on fire whenever the band really want to dive headlong into the ‘fastcore’ genre descriptor.

From a numbers perspective, you could view Death Like A Sunset and Hauntology as a combined second full-length release for Choke Me. Each weighs in at six songs, and being split apart by about six months makes it seem more like an album cleaved in half. If you really dive into the numbers though, you find yourself in the situation of the three releases punching in at about the same weight as well. That may speak more to the plug and play nature of how Choke Me approach music though: They plug in, hammer shit out, and get right the hell back out.

They like that fast part of their musical style so that each release sticks around as long as a controlled explosion would. They’re just as loud and violent musically, and last about as long, but we’d be lying if we said we didn’t salivate at every oppurtunity the band takes to musically tear our heads off. At sub-fifteen minutes, Death Like A Sunset is definitely worthy of a listen.

One Response to “CHOKE ME: “DEATH LIKE A SUNSET””