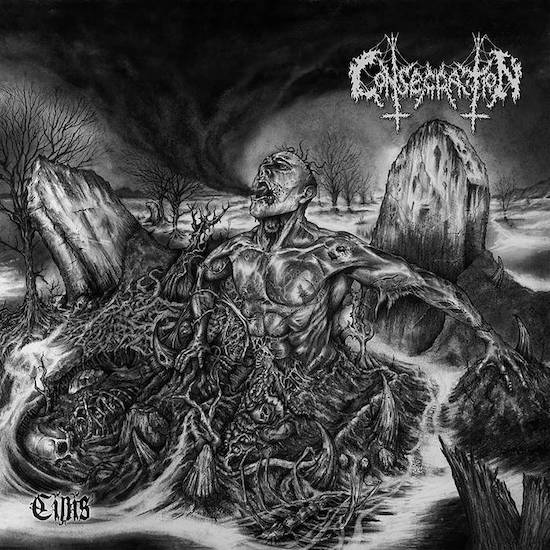 Cinis is the name of the forthcoming third album by the UK doom/death metal band Consecration. We’re told that the word is taken from the Latin and that it means “cold ashes, and has numerous associations with death, destruction and ruin, extinguished love and burnt-out hate” — which makes it a form-fitting title for the record.

As we’ve said more than once, we don’t usually copy-paste promotional material, preferring instead to create our own impressions independently and express them in our own words. But this is one of those rare instances where the words circulated by Redefining Darkness Records (who will release Cinis on June 17th) eloquently capture much of what makes this album so dauntingly powerful: 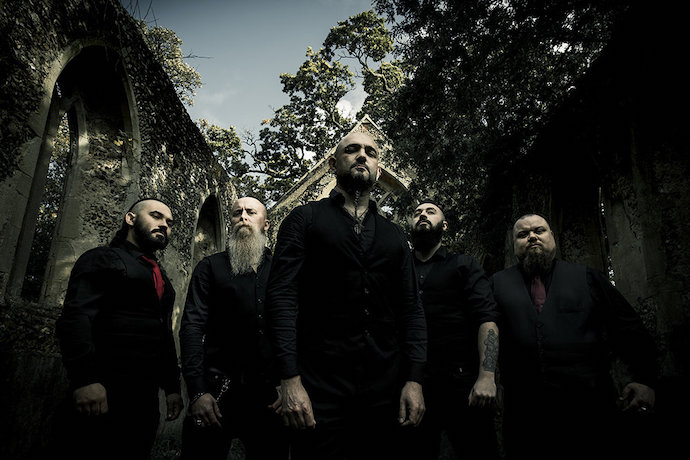 The music of Consecration has always been touched by the black hand of despair, draped in shrouds of sadness. Their songs conjure vistas of desolation and paint pale ghosts of agony and loss on backdrops of storm riven twilight skies. They have explored the depths of melancholy and the echoing chambers of the dead and now, with the perfect line-up cemented in place they have discovered the absolute essence of their sound; a fluid coalescence of the rot and decay of ancient death metal and the sombre majesty of doom. The terrors of the tomb and the agonies of bereavement embrace, becoming one…becoming Cinis.

What we have for you today is the premiere of a song that bears out those words. Vocalist Daniel Bollans has told us this about the song:

“The Dweller In The Tumulus” is a track about an ancient being or spirit, that lurks in the barrows; or burial mounds. Laying undisturbed for centuries, constantly attempting to lure the unsuspecting with its silent whispering…

This beckoning proves too tempting to the unwary traveller, whom, after succumbing to the entities’ unspoken promises of whatever is their deepest desires, are then confined themselves to the barrow; entombed by the malevolent entity that dwells within.

Broadly speaking it is about entrapment by something, or someone, that wishes you ill, yet disguising the malice as something too tempting for you to reject… This is an extension of ideas from “Echoes Of The Dead” and also to some extent, from “The Visitant”, both on our first album, Ephemerality. I hadn’t written a song based on ghostly beings in a while, so had a lot of fun with this one. 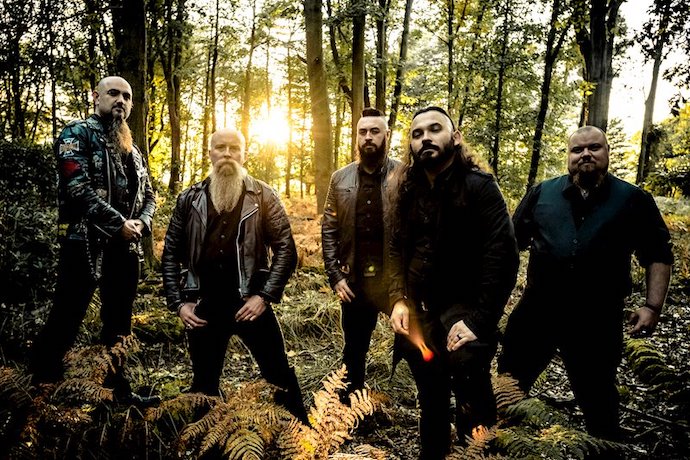 Through a mix of titanic chugs and python-like slithering, the song’s main riff, coupled with gritty abyssal gurgling, gut-slugging bass, and skull-cracking beats, immediately creates a dark and dire mood. When the vocals rise in deranged, serrated-edge howls and the riffing grows even more poisonous, the menace in the music escalates, and it also becomes a portrayal of agony as the tempo drops to a crawl and the guitars moan in misery.

The gargantuan vocals cry out in scarred, reverberating tones that are truly horrifying. The band drench the music in a mood of hopelessness, slowly dragging the listener into the foul, suffocating soil of despondency and despair. The drums do become more energized (and battering), just in time for a guitar solo to cry out and convulse — and then the song itself convulses (as if the afore-mentioned traveler has realized, too late, what has befallen him).

The riffing buzzes in a semblance of growing tension and becomes a frenzy of scissoring sound. The momentum surges, the drums driving harder and faster, the vocals as maniacal as ever, creating a finale that channels a delirium borne of pain.

Cinis was recorded and mixed at Blaze Studios and was produced by Raoul Crane and Consecration. The album was mastered by Greg Chandler at Priory Studios. It includes guest vocals on “Ground to Ashes (A Cremulation)” by Dave Ingram (Benediction). It’s completed by cover art and the internal illustration “The Rotting and the Earth” in charcoal and graphite by Daniel Bollans.