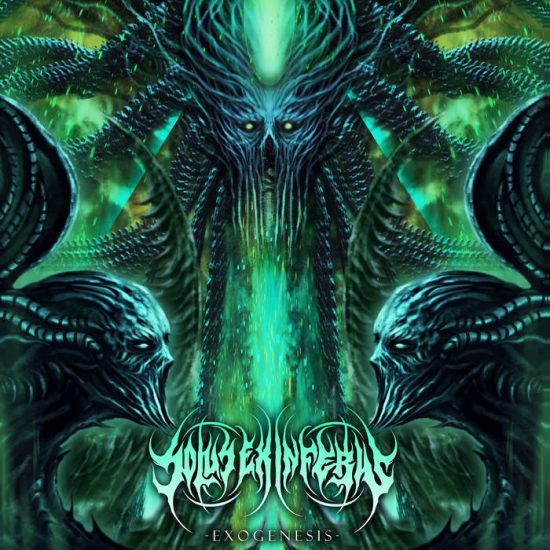 What this translates to is the latest EP Exogenesis hailing from all over the world in the name of bulldozer brutality. You’ll know whether the twenty-five odd minutes of Exogenesis are for you if this statement gets you excited.

This EP sounds like a truck engine. It’s low-end given life and made sentient. If you’ve dug on the continuing mixture of tech-death, brutal death metal, and slam’s inky waters into the ever-shifting and sublimating mass between the two, then Exogenesis is probably perfect for your list.

The opening song of this EP is the title song and it wastes no time faking subtlety at all about how the next twenty-some-odd minutes are going to go. Each track is going to be a high-four- to mid-five-minute jackhammer punctuated with sharper grooves and plenty of excuses to bellow and grunt over the top while the rhythm section seems to glow white-hot due to how fast they are required to go. Case in point: Listen to how the band have to rumble along with each yell of the “Exogenesis” title during the opening song and how quickly both bass and drums have to dart around to order to hang on to the wall of guitar being thrown at them.

The EP gets as otherworldly as its cover art during the sci-fi bent of “Nexus Cataclysms”. It’s one of Exogenesis‘ longer songs but it’s a continued demonstration of just how angular the band can get, with a doubled vocal approach and a constantly hammering rhythmic drive to it. It always seems like “Nexus Cataclysms” is teetering on the edge of a full-on blastfest but never quite goes that route. The double-bass drums get the shit kicked out of them but otherwise it’s the lurching groover of this particular release.

“Terraforming” follows it by discharging the chaotic mess that people might be more accustomed to, since the song seems to jump around in a thousand different directions before segueing into a guest solo from guitarist Denis Shvarts. “Critical Failure” is a little bit more immediate in its aims. It isn’t too long before you hear the song’s name uttered, but Solus Ex Inferis work their damndest to get as much mileage out of that song since it’s the other five and a half minute jam on this EP. It also leaves plenty of room for its guitar solos as well, including a performance by the other guest soloist, Matias Quiroz, who handles a few of the earlier shredfests as well.

Given the crazed state of the world right now it’s hard not to be at least somewhat impressed that the Solus Ex Inferis project already has two EPs and a full-length to its name. They clearly have an immensely talented lineup of musicians available to them and are branching a bit from the previous demon-obsessed subject matter with Exogenesis, though it’s more of a death-metal lateral when you land in the green- and blue-hued spheres of science-fiction horror.

Though we’re not breaking boundaries here, Solus Ex Inferis make for an interesting snapshot of one of the current blends of death metal brutalization happening out there in the heavy metal world. Equal parts brutal, tech, and brain-dead hammering, Exogenesis is about as bleeding red meat as they come. It works well for an EP because twenty-five minutes seems like the perfect amount of time to lock you into the latest issuance of recorded rock-quarry blasting before your mind starts to wander a bit.

If you’re seeking your next death metal flattening, why not see if this one can knock you around for a few?