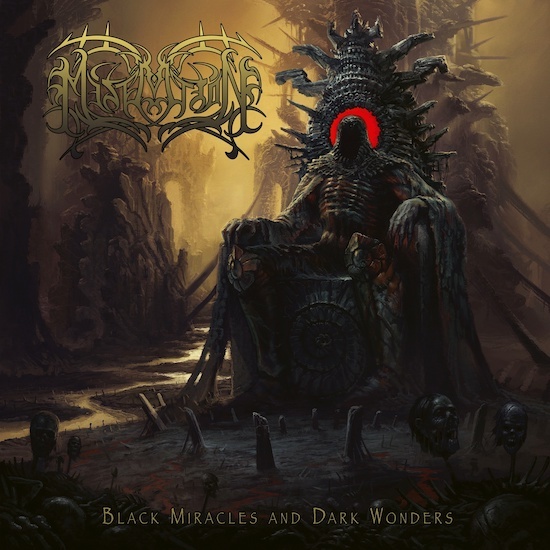 It has been almost ten years since the previous Miseration album Tragedy Has Spoken. If the band had held on to their newest entry back into the death metal fray, Black Miracles And Dark Wonders, for another two months, it would’ve been a full decade. Talk about coming in just under the line of having that broadcast everywhere.

Miseration is one of a few long-running collaborations between constantly writing multi-instrumentalist Jani Stefanovic and legendary metal vocalist Christian Älvestam. Black Miracles and Dark Wonders is their fourth album; the group’s previous three were launched on a nearly every-three-year cadence before the Miseration project would find itself sidelined for nine years. In that span of time they found themselves increasingly busy, with both of them collaborating in the Solution .45 project as well – which would see two more albums added to that discography in that time. 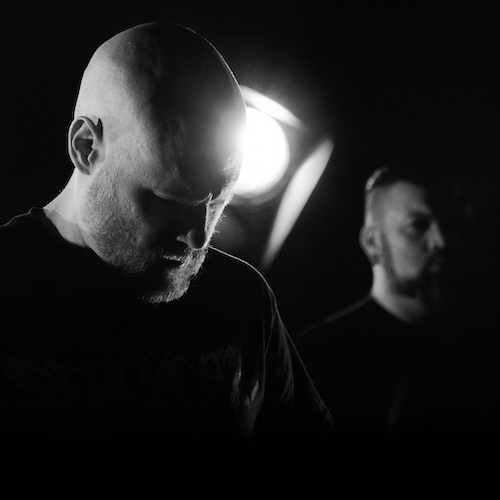 Christian would also go on to a more contemporary music styled solo release, the decidedly more intense Svavelvinter, crank out a release with Quest Of Aidance, somehow find himself in the Cipher System lineup – and yes, contributed some vocals to those guys’ Night Crowned project on the Hadanfard release, and continue his hot streak of guest appearnaces.

Jani would find himself working in three other metal groups that range from power metal/thrash hybrids to a melodeath jam during the lockdown pandemic tmes ensconed on the Melodic Passion record label.

Very long story short, the two main collaborators just found themselves incredibly busy, yet the call of the incredibly dense and bludgeoning death metal of Miseration just proved too strong, it seems, because after a crowdfunding campaign and a new home at Massacre Records we find ourselves at the feet of the fourth full-length Miseration album.

After so long a break from the project that you’d likely wonder where they’d pick up from, it seems that Miseration‘s answer was to start from all the points they stopped at, resulting in an album that is partially career retrospective: equal parts Your Demons – Their Angels, The Mirroring Shadow, and Tragedy Has Spoken, and as you might assume for an album punching in at eight songs and forty-plus minutes long… about as dense as those three packed together.

Now, it should probably be clarified that I was one of those who really enjoyed Tragedy Has Spoken. It was an album that felt like it threw everything against the wall just to see what stuck, and some of the sheer audacity of the shit it pulled made me smile. The song “Cinephes” especially, seemed to dive in a million different directions and then at the end had the gall to close with soft piano and rain sound effects.

My review of the disc goes much further into depth with this. But, I’ve also found something to enjoy across all of Miseration‘s discography. Your Demons – Their Angels can feel a little proof-of-concept at times but it was clear that they had found their footing early on and the sort of densely packed song style Miseration writes was already there.

The Mirroring Shadow, on the other hand, slimmed things down a bit and is just relentless from front-to-back. It also has “Dreamdecipher” in its tracklisting right at the opening and it is one of the best examples of ‘death metal as bludgeoning hammer’ for a starting number out there to date. It’s not hard to see how Black Miracles And Dark Wonders might already hold appeal given how it seems to want to tie the entirety of Miseration‘s career into one album.

“The Seal Of The Eight-Pointed Star” starts things off by effectively launching the listener out of a cannon. It’s the zero-to-sixty in two seconds song, and yes, will likely call to mind the previously mentioned “Dreamdecipher” in its tactics. It is a longer song than its much older brethren – as are most of the tracks on Black Miracles And Dark Wonders –  but the intensity cranked to 10,000% as your first impression is tried and true; Miseration don’t fuck with that formula here.

They’ve proven to be very good at that one particular thing and they continue to prove it on “The Seal Of The Eight-Pointed Star”. It’s a massive track that keeps things fast and hammering for four minutes. You get a taste of the light backing-orchestration the band made use of early in their career and then you get the taste of how the song still reaches its tendrils out in wild directions, like what Miseration did on Tragedy Has Spoken. The fun part then, is that you still have seven other songs to see what else Miseration decide to throw at you.

Yes, this does mean that Jani and Christian make use of every one of their talents on Black Miracles And Dark Wonders. The following song is over six minutes long and it’s the first time Christian breaks out his singing voice on top of the low growl that has often propelled the band.

Granted, Miseration never shied away from such, but it seemed like back when Scar Symmetry were breaking big that as people were drawn toward their other projects, Miseration would get more dense and death metal as a response. You would come to them for the skullcrushing heaviness and go to other projects if you wanted to hear him singing as well.

“Reign Of Fate” condenses a lot of that feeling into its 6:13 and while it is less prone to dart in a million different directions and favors a more straightforward song-path, it’s still a humongous song that spends its last minute on ambient creature noise and scene setting keyboard.

“Fed By Fire/Led By Blood” is another packed highlight of a song that has more varied vocal approaches from the two musicians involved here. Like “Reign Of Fate”, it calls back more to Your Demons – Their Angels than other songs present here, but that is how that album was. It was comprised of big songs filled with a whole lot of ‘stuff’. It was all fairly straightforward but it was an album that seemed purpose-built to overwhelm you back then, so the songs on Black Miracles And Dark Wonders that travel in that direction perform a similar act. The chaotic and sweeping choirs throughout the song reinforce that fact.

It’s also part of a group of tracks in the middle that are similarly united by the fact that they have extended keyboard intros for cinematic sake. If you really want to hear the band reaching for experimental chaos, “Shah” toward the end of the album will meet your needs exceedingly well. That opening guitar-riff is likely to burn more than a few faces off once it barges in.

So, as strange as it sounds, Black Miracles And Dark Wonders is an album that could pick up where Miseration left off from any point in their career. They’re playing to all of their strengths on this release and as a result it’s forty-minutes of heavy-equipment turned death metal. At times it is chaotic, at other times it’s incredibly dense with just how much Miseration are trying to stuff into a song, and even more often there will be an odd off-kilter turn that has the band doing anything possible to not be pigeonholed as just frighteningly heavy.

Black Miracles And Dark Wonders is what you’d want from a Miseration return. It’s huge and cinematic and yes, even though they try to be more than just this, still intensely heavy. It’s a lot of hammering drums, low growls, and relentlessly fast guitar, wrapped in a light orchestral backing with a chaotic choir that seems to be along for the ride just because they too want to hear a musical apocalypse. It’s a good return for a project that has been quiet for such a long time.

One Response to “MISERATION: “BLACK MIRACLES AND DARK WONDERS””