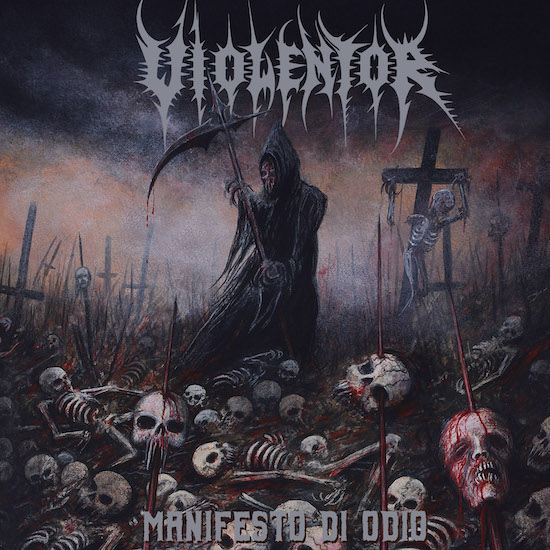 That’s one way of thinking about the riotous onslaught of Violentor‘s new album Manifesto di Odio, which will be released on May 20th by Time To Kill Records. Speed metal and thrash are this Italian band’s weapons of choice in their campaign of defiance and rage, augmented by “blackened” armaments of blasting drums and merciless swarming riffs. It’s the kind of furious high-octane thrill-ride that will get your own motor running fast and hot. 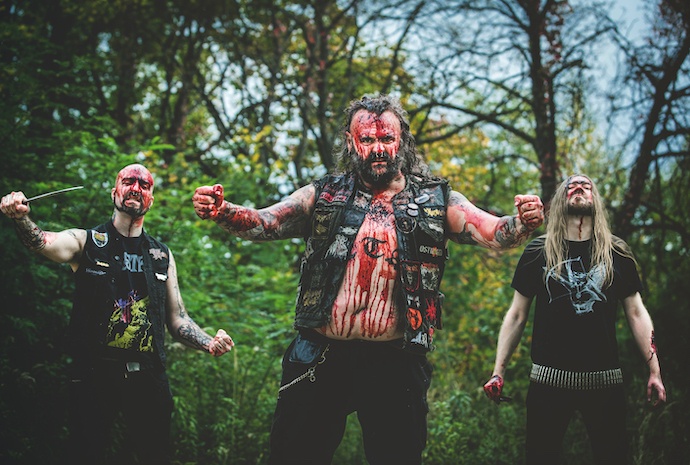 The album opens with the title track, which itself includes a grandiose introduction of orchestra and choral voices — but then attacks without warning in a flurry of vicious tremolo’d chords, thundering drums, throbbing bass, and a vocal cornucopia of savage screeching, wild howls, and furious yells.

The energy of the song is super-charged, and its viciousness is unmistakable. The drumming veers into d-beat cadences, the riffing roils and leaps in displays of fiery, unchained madness, the guitar-leads blare, shiver, and scream, and the combined impact is a massive injection of adrenaline.

In the tracks that follow, Violentor keep their feet jammed on the gas pedal, racing at a ferocious pace like a big eight-cylinder post-apocalyptic road warrior eating up the ruined pavement and blasting flames from the exhaust. The speed of the riffing is in the red zone, the drums pump like overheating pistons, and the enraged vocals must have left the throat blood-red too.

“Facciamo La Guerra” provides a great example of how Violentor prevent this mad onslaught from numbing the senses with its relentlessly pulse-pounding fury. There the band incorporate glorious heavy metal riffage that comes in blazing bursts, coupled with guitar arpeggios that dart in diabolical fashion, creating the experience of a hellish carnival in progress. 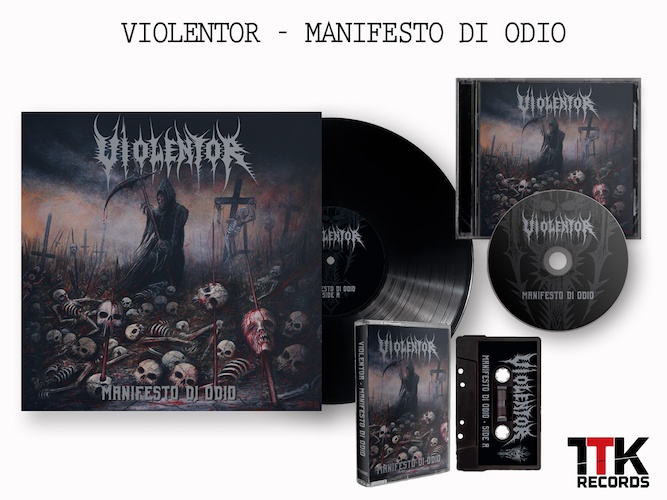 The band use other ways to distinguish the hard-charging, high-flying tracks from each other. Sometimes the riffing generates dismal and downcast moods even though the fretwork is still moving at high speed, or fashions feelings of fear and confusion or ecstatic freedom from any rules or conventions, and the penultimate track “”Tieni d’occhio la tua strada” becomes a lurching, stomping monster of sound (with a few sweet bass solos in the mix).

In almost each song, of course, the drumming shifts gears repeatedly, stripped-down punk chords enter the fray, and the vocals are almost unwaveringly insane.

The biggest distinction comes in “Ballad of the Free Spirit”, the depressive folk-ish track that sits right in the middle of the album. There the hurtling pace comes to a sudden halt, acoustic guitars ring and a violin wails in somber tones, and the vocals become a scratchy, near-sung manifestation of agony and gloom. It’s a breather of sorts, though a disturbing one, and then the band go back on the attack — because this is indeed a manifesto of hate.

But make no mistake, this hate-filled manifesto has plenty of melodic and rhythmic hooks waiting to puncture your flesh and become embedded there, even as the music is causing your nerves to ignite and your muscles to twitch.

But you obviously don’t have to take our word for it, because the today is the day when you can learn it all for yourselves:

In their lyrical themes, the tracks focus on serial killers, as well as social aggression against the corruption and hypocrisy of human beings, and more. Time To Kill will release Manifesto di Odio on vinyl LP, CD, cassette tape, and digital editions, and pre-orders are available now:

No Responses to “AN NCS ALBUM PREMIERE (AND A REVIEW): VIOLENTOR — “MANIFESTO DI ODIO””