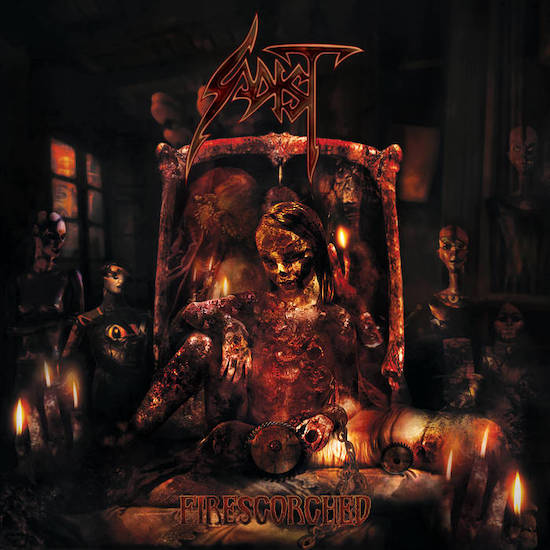 If nothing else over the course of Sadist‘s career, you could say that every one of their album releases have always been interesting events. What other groups out there have not only been through multiple waves of the tech-death craze but also themselves have jumped genres so many times that even to this day they’re a difficult group to pin down?

Exceedingly proud of their jazz influences and keyboard usage over the years, Sadist have always been more than a pack of incredibly talented musicians, and who else can say that their previous four releases have dealt in realms of spirituality, African mythology, horror movie soundtracks, and as close to a haunted Christmas album as you’re going to get until Make Them Die Slowly expand upon their Silent Night, Murder Night influences?

Firescorched is the newest release from the Italian prog-death crew and one that is also interesting for the massive lineup shift that took place between this album and 2018’s Spellbound, wherein the entire rhythm section wound up bowing out of the spotlight. Longtime drummer Alessio Spallarossa stepped down and prolific drummer Romain Goulon took over, but even more interesting was who the band would grab on bass — Jeroen Paul Thesseling, whom many will recognize from his time in Obscura. 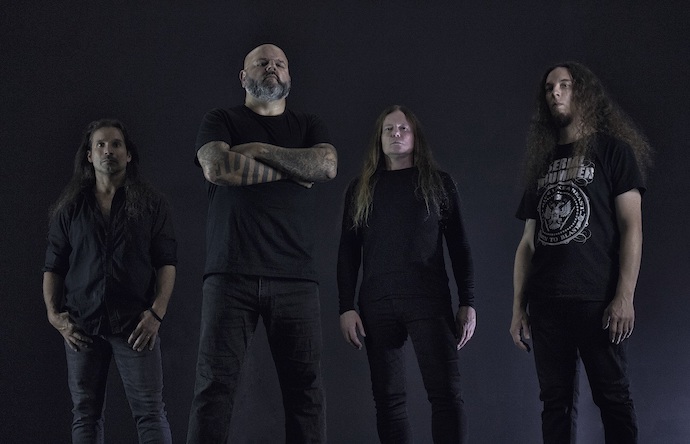 You’d think that even with a massive lineup shift like that, Firescorched still wouldn’t really have much in the way of room for those two to make their mark. Often it seems like records with new members have a ‘feeling that musician out period’ before they get their time to shine, but that isn’t the case with Firescorched. The new album goes in the other direction, putting both the new drummer and the new bassist through the ringer from the start, and as a result it winds up being one of the most traditionally ‘death metal’ albums Sadist have put out in some time.

At its core Firescorched is still recognizably Sadist. Trevor‘s vocal style is hard as hell to mimic; you could probably pick that dude out of a yelling football crowd if given the opportunity. Sadist are also still as incredibly ambitious as ever, trying to make themselves as distinct as possible. The keyboard swells and guitars hit immediately after some opening chanting within the first track, “Accabadora”, and almost right on cue the rhythm section hammers along just as quickly. If you’re a big fan of death metal’s bass wanderings, where it sounds like the bassist has been given the chance to just maneuver up and down the fretboard with an insect-like crawl to it, then Firescorched should have you perking your ears right away.

“Fleshbound” is an early highlight in part because it’s a lot of fun to hear Sadist just go with a recognizably fast guitar riff. It’s a solid gallop and hard-hitting percussive seciton that helps define much of “Fleshbound” and its opening movements. You could even try to headbang along with this one before the group go fully into prog-death mode again with all the odd time signatures and musical wanderings to follow. Trust us, this happens within “Fleshbound” but right in the last moment of the song, as if Sadist couldn’t stand to let something exist in ‘kind of normal’ state for the entirety of the song.

Much like Sadist‘s overall discography, even the tracklisting within Firescorched bounces all over the place. The group put a keyboard-heavy instrumental in the form of “Loa” four songs into the album, and have it following a real oddball genre-dancer in “Burial Of A Clown”. You could view it as the first break in the album’s opening attack, but Sadist aren’t the sort of band given to abrupt violence and outright attacks like most death metal is. Even now, the band still refer to their songs as ‘compositions,’ so to them they seek to be something greater.

It’s been enjoyable to see just what angles the band choose to attack from with each release, and though Firescorched doesn’t give off the sense of being an overall concept album, it’s still not the expected gore- and entrails-soaked beating one might guess at. It’s what makes a song like “Three Mothers And The Old Devil Father” a journey to talk about. Although that song follows much of the opening blueprint laid out by Firescorched‘s first few songs, it does make some reaches. Guitarist Tommy Talamanca also does some interesting work weaving both the opening keyboard ambience and guitar lead together before the drums get to let loose and actual go on a full blastbeat session for a bit – which is something Sadist haven’t often given themselves over to in previous releases.

It’s appreciable that Sadist also kept things fairly compact this time around, with each of the songs moving in the three-to-five-minute range. None actually hits the five minute mark – though “Fleshbound” gets close at 4:59 – and even the title track keeps things at a neat four minutes. You never get the sense that Sadist are wandering just to wander this time around.

Firescorched does what many albums do where drastic lineup shifts have occurred, in that it feels scrappy, like Sadist have something to prove again. They’re coming out swinging this time and because of this, the music winds up compact and focused more than it has been on previous releases. Things are cohesively heavy on here. Firescorched is one of the most approachable Sadist albums in some time, and although the real avante-garde jazz weirdness and concept-work is missed, hearing Sadist rip through a collection of horror tales is just as fun. It’s also a hell of a demonstration for them writing a straightforward headbanger from time-to-time.