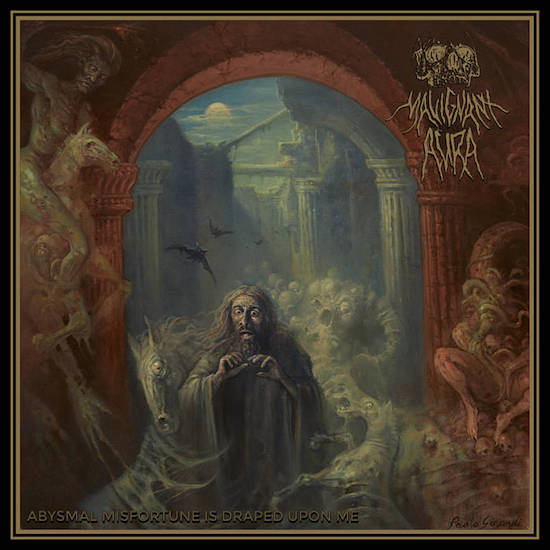 Sometimes an album title alone deserves a round of applause. So often they’re ho-hum hum-drum variations on well-worn tropes, other times they’re so unintelligible as to be word salad without the dressing, and perhaps worst of all they might provide understandable clues — which turn out to be all wrong after you listen to the music. When a title nails the music and does so with flair, that’s when the clapping ought to begin…

…which leads us to the title of Malignant Aura‘s debut album: Abysmal Misfortune Is Draped Upon Me.

When you listen to this jaw-dropping new album of death/doom in its entirety — and you’ll have a chance to do that right now — you’ll understand just how fitting and evocative the title is. 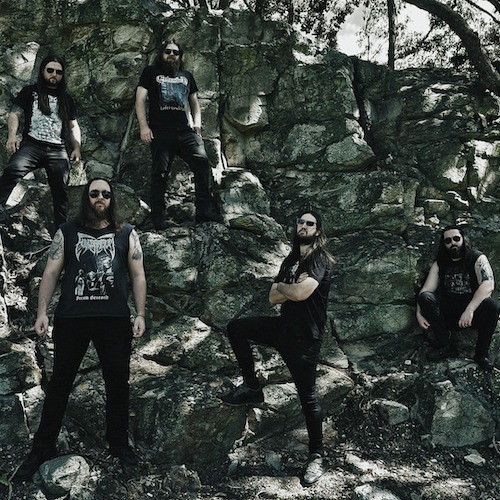 The album begins with a track that shares the band’s name. It wastes no time immersing the listener in misery and gloom. The chords drag like a wounded behemoth crawling to the burial ground of its kind, the lead guitar wails like a lost spirit, the drums boom and clobber, and gargantuan growls and horrid howls proclaim the words in imperious yet tormented timbres.

The song’s physical punch is cataclysmic, but grows more feverish and destructive, and the miserable harmonies become more anguished, writhing like feeding worms and crying out in pain. There’s also something about the song that feels like a looming monstrosity. That wounded, hulking behemoth is still dangerous, still capable of blotting out the sun as it rises, still capable of bringing visions of horror to the broken minds of men.

From there, the band continue to work their hideous and heart-rending magic, unfurling desolate guitar harmonies while inflicting bone-smashing punishment and spewing forth torrid vocal bestiality. But it’s definitely not a repeating blueprint. The tempos change as the band alternately crawl, bulldoze, and rampage. The riffing seethes and swarms, creates vistas of disease running rampant as well as the gradual congealing of black blood across barren plains, and the soloing is equally multi-faceted, fashioning episodes of both fire-storming lunacy and un-treatable suffering.

The music channels the degradation of decay and rot, the bitterness of dashed hopes, and the frightfulness of minds splintering apart in terror. It stomps with the cold, cruel power of a pile-driver and is also capable of creating apocalyptic levels of chaos, as well as nightmares of hideous grandeur. And to be clear, these changing manifestations of degradation, downfall, and devastation often occur within the confines of single tracks, making each one a changing journey into hearts of darkness.

At times, the band also succeed in creating chilling but seductive spells with their ringing guitars (what happens in “There Is Blackness In The Water” is a prime example). There is a prominent place for the bass, which contributes significantly to the changing moods, and the layering and interplay of the guitars, coupled with the riveting drum variations, all contribute to a style of song-writing that’s elaborate as well as emotionally ruinous.

Especially for a debut album, this one is a towering and soul-shuddering success, one that’s just as capable of kicking your heart into over-drive as it is of dragging you into abyssal netherworlds where dread and grief endlessly reign.

To our own words we add those of the band itself:

In partnership with Bitter Loss Records, we are pleased to finally unleash our debut record – Abysmal Misfortune Is Draped Upon Me. This is an album both lumbering and turbulent, coalescing sorrowful melodies and bludgeoning riffs into an experience befitting those with a penchant for the genre classics!

The album was written in Brisbane and Melbourne, Australia. Its twisted passages were recorded at Black Blood Audio, by the brutal Brendan Auld, and deftly mastered in the USA by the venerable Arthur Rizk.

We hope you enjoy Abysmal Misfortune Is Draped Upon Me. This truly is one for those marching slowly unto ruin and woe.

The album will be released on May 31st by Bitter Loss Records, and it’s available for pre-order how:

One Response to “AN NCS ALBUM PREMIERE (AND A REVIEW): MALIGNANT AURA — “ABYSMAL MISFORTUNE IS DRAPED UPON ME””