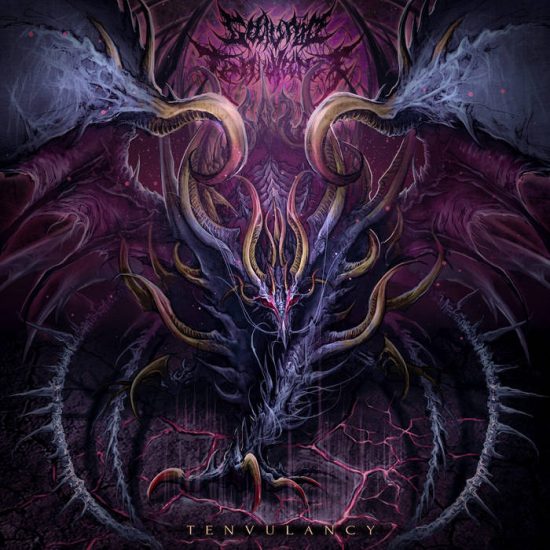 (For his latest review, DGR decided to time-travel back into this time a year ago. What did he find?)

Yes, gaze upon the cool album art and embrace the fact that this EP hit in June of last year when we were all busy trying to brainwipe 2020 from our heads.

At last count my private review archive had 14 releases that were hitting this year that I’ve meant to keep an eye on and look at. I assure you, none of your favorite bands are in there nor is the latest and greatest underground phenom. Don’t panic, we’ll get to it eventually… maybe. But, there are a few that have been sitting here for a very long time and there’s a very mischevious part of me that just wonders ‘well what if we tackle it now in the midst of a lot of high profile releases hitting all at once?’

Japan’s mouthful of a name symphonic melodeath/deathcore project Galundo Tenvulance is one such group. Because their four-song EP Tenvulancy hit in June of last year, it’s highly likely that by the time this review runs on the site this EP could very well be *gasp* a year old. Since we’re known for being the most up to date and recent with everything, you can imagine how much this is going against the grain here.

Metal’s journeys around the world are always fun to witness and part of that is seeing what scenes develop where. Although languages may not be shared, a lot of the tropes and given pieces of heavy metal can become common, and thats the case with the Tenvulancy EP. Across four songs there’s a very clear sense that Galundo Tenvulance are a young group – and to be fair, prior to this EP they had only released a single in 2020 – and they’re still cutting their teeth, style-wise, which gives them a fair amount of freedom to dance on the fine line of being a symphonic melodeath band and being a full-out deathcore group.

Given the increasing use of symphonic keyboards within the -core scene as a whole over the past few years, that sort of fusing of the two only feels natural, which is why the jump from the straightforward keyboard-heavy assault of opener “Bloody Fake Star” into the more traditional pit-bruisers that are the songs that follow doesn’t feel like a sudden shift.

“Genesis” may be the band’s oldest song on the EP but all the hallmarks meant to send people flying in from all angles of the crowd are there. The way Tenvulancy is laid out, it’s one very epic-sounding opening number and then three weighty bruisers befitting the group’s pointy-and-sharp slam band befitting logo. While not every riff within the song works, things don’t last long enough within it to ever get the sense that the group are dragging their feet. It’s one tree-thrower part to the next tree-thrower part in the span of seconds.

“Until The Day I Decay” continues down that pathway with a blastbeat-heavy opening and grand keyboard swells before an opening solo. It’s the sort of song you could pick up within the current ranks of Lacerated Enemy or Unique Leader‘s more wall-punchy bands. It actually wouldn’t be too shocking to see the Galundo Tenvulance crew picked up based on the strength of the blatant-as-hell breakdown and low-end monster gurgle party that is the middle of “Until The Day I Decay”.

Only a year late and here we are with an EP that it turns out is a pretty solid-slab of scene-core material. Although the ongoing pandemic has been incredibly unkind over the past few years it’s likely that Galundo Tenvulance may find some serious footing in the current scene internationally – and only partially because of the tongue-twister that is the band’s name.

Where they develop from here will be interesting to watch, especially as the group figures out what did and didn’t work for them within the primordial soup that is Tenvulancy. They’re solid right now but there’s some promise in those four songs that could see the band stealthing their way in, right next to the current jiggling swath that is the genre-blob of symphonic deathcore hybrid crews these days.