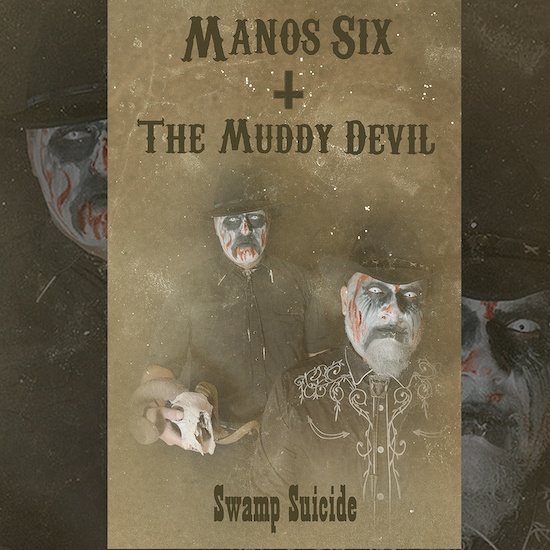 As we all well know, the Devil is a central figure in the sprawling musical narratives of extreme metal, sometimes as a central figure and sometimes as the diabolical Muse who fuels the inspirations and philosophies of the artists. But of course the Devil is present across a wide span of other musical genres, from old-time gospel music to blues, country music, and much, much more. What Lucifer represents are ideas and feelings that know no bounds.

The Devil is certainly a powerful presence in the music of Manos Six and the Muddy Devil, and so even though that music is far, far beyond the soundscapes to which we usually devote our attention at this site, it is a kindred spirit to much of what occupies our attentions. The music is also captivating, which made it even easier for us to agree to the premiere we’re hosting right now. 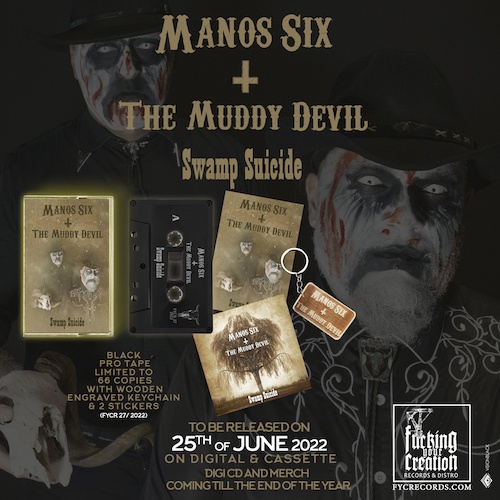 The song you’re about to hear, through a video created by by George Lamprakis (Barking Dog Productions), is “The Devil Will Take Me by the Hand“. It’s one of 10 tracks on an album named Swamp Suicide, which includes not only original tracks such as this one but also a rendition of the gospel song “Old Time Religion” and a cover of “Lucifer” by Of the Wand and the Moon. It will be released by FYC Records on multiple formats (we’ll give you the details after the music).

When you hear the song, it’s almost guaranteed that you’ll misplace the location of the band. As their label explains, “The duo builds its stage atmosphere with a conceptual presentation that will be taking us to the empty fields of the American south and the loneliness of its swamps, with Lucifer being the light, and the veil of death being the ever-existing darkness”.

The principal performers in the band are Manos Six (Lead Vocals, Banjo, Percussions, and Wood Cutting) and Stamos Abatis (Acoustic Bass and Moonshine Maker). On the album they’re aided by an assortment of talented guest performers and vocal samples, and together they’ve created a musical amalgam of Dark Americana, Death-Country, Neo-Folk, and Black Metal. And though you’d guess that they dwell in the American South (or perhaps Hades), their homeland is Greece.

As the banjo dances, the bass lends its pulse, and the percussion skitters, the music in this new song begins to work its magic right away. It becomes even more sinister and seductive as the vocals come in. There comes a point when the vivid energy seeps out of the music, and things then do get very swampy then, like the dripping gloom of willow trees over thick waters that radiate glowing mists.

The imagery in the accompanying video leaves no doubt about the historical roots of this kind of music, and it suits the song very well indeed.

Swamp Suicide was recorded at Pentagram Studio by George Emmanuel, who also mixed and mastered the album. It features graphic design and layout by Nikos Stavridakis (VisionBlack).

The album will be released by FYC Records on June 25th in 66 hand-numbered black cassettes, in black cases with wooden engraved logo keychains and 2 stickers. It is also scheduled to be released in October 2022 in limited digi-CD Format, plus merch.