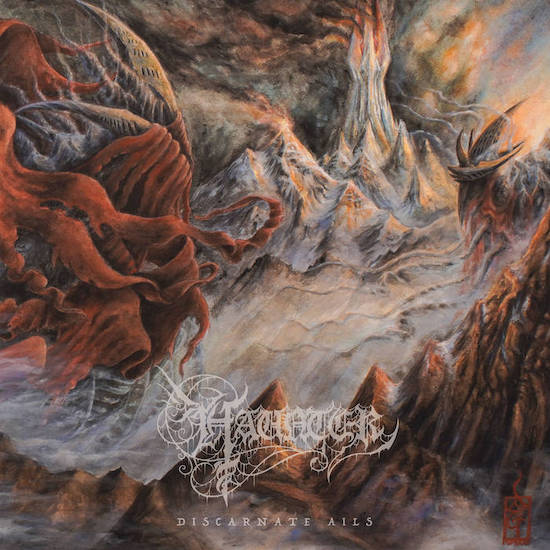 (We present Todd Manning‘s review of the new album by Haunter. It was released earlier this month by Profound Lore.)

Hailing from Austin Texas, the trio known as Haunter released Discarnate Ails via Profound Lore on May 6th. While only consisting of three songs, the album is nothing short of an epic journey through complex and progressive death metal.

The album opens with the ten-plus-minute song “Overgrown With the Moss”. The clean guitar that opens the track hints slightly at early Metallica at their most subdued, but this quickly gives way to a mammoth riff and powerful vocals. The feel is black metal in its scope but death metal in its density. A melodic guitar figure adds to the feeling of grandeur, yet things change again to a bit of Gorguts-inspired dissonance. More clean guitar work returns and things continue to shift and transform. And all this in the first half of the lengthy piece.

Obviously, Haunter are not lacking in ambition, and thankfully they’re able to execute all of this with great skill. 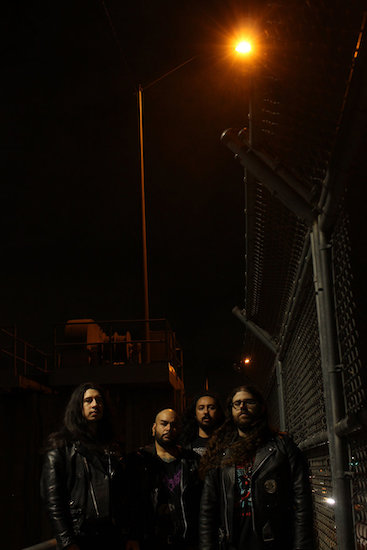 “Spiritual Illness” is the shortest of the three pieces, clocking in just under the seven-minute mark. Once again, they explore the intersection between black metal and dissonant death metal. Despite the obvious technicality, the music feels hypnotic. After the opening section, the vocals come in sounding like the Lovecraftian entity Azathoth given voice, low and cavernous, dispensing spiritual truths that are ungraspable by our puny human minds. A Deathspell Omega influence pops up midway through, strange arpeggios attaching themselves to the cacophonous low end. The rhythmic churning tosses the listener about like some sort of aural whiplash.

The album closes with “Chained at the Helm of the Eschaton”, an epic fourteen-minute song that serves as a fitting conclusion to this journey. The opening riff is glorious, like Luc Lemay joining Emperor. The drum blasts are simply paint-peeling while the vocals seem to swarm in from every direction. Haunter alternate instrumental sections and vocals with great deftness. They shift gears into an epic doom section and it feels like being dropped onto an alien planet. The guitar lends a restrained but effective solo over this and then the opening riff returns, sweeping the listener back into the maelstrom.

The whirlwind of riffs continues and the whole thing feels like a cyclopean maze from which there is no way out. The song finally concludes with more of the spectral clean guitar work that appears and disappears throughout the album. It doesn’t feel like a way out though, more like a lost soul fading into the horizon.

Haunter’s modus operandi isn’t exactly impossible to pin down. The spiritual sweep of classic black metal blended with the mind-altering twists and turns of Gorguts and Deathspell Omega. But the results are pretty damn stunning. Discarnate Ails is a spiritual journey through the borderlands of reality, a harrowing tale of cosmic horror narrated by the cavernous vocals of an alien god. This album is as enthralling as it is disorientating, leaving the listener in a blackened trance. For those who find such a state appealing, and you know who you are, Haunter is the band for you.

One Response to “HAUNTER: “DISCARNATE AILS””