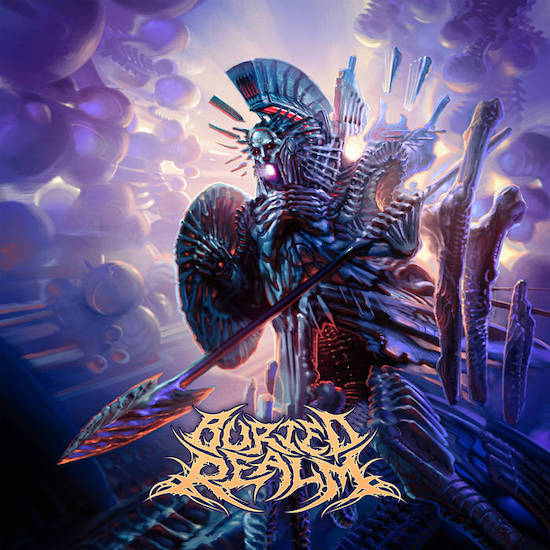 Colorado-based Buried Realm has returned to the fray with a self-titled third album that’s just as much of an eye-popping attack as the Pär Olofsson artwork that blazes off its cover. That shouldn’t come as a huge surprise for those who experienced the band’s startling debut album The Ichor Carcinoma (2017) or the very impressive sophomore full-length Embodiment of the Divine (2020), but even if you know those records, this one is still a spectacularly head-spinning and electrifying jolt to the system.

Once again, the band’s alter ego Josh Dummer has enlisted an impressive array of iconic names as guests to add their own fireworks to a show that’s already loaded with fireworks. Those names by themselves (which we’ll come to eventually) would be sufficient enticement for any newcomers to give Buried Realm a chance, but they really are just bit players (albeit famous ones). It’s Dummer‘s songwriting and performances that carry the main weight here, and he carries it easily — as you’ll discover through our premiere stream of the entire action-packed record on the eve of its release. 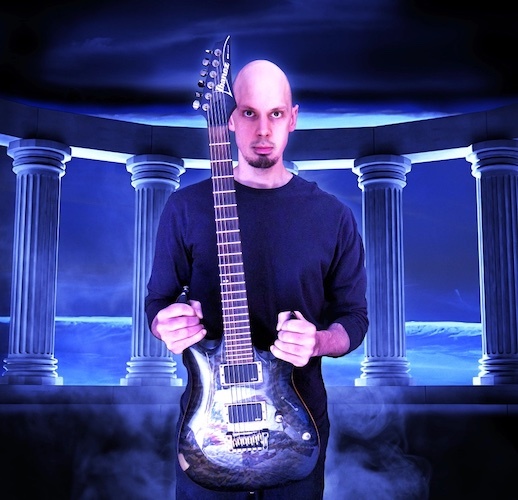 As hinted above, those who seek melodic death metal with plenty of pyrotechnics will be rewarded by this album, but it’s also an album where the “melodic” part of the genre descriptor should also be underlined three times. That becomes evident immediately, thanks to the epic overture provided by the opener “Entrance”, and then the process of electrification begins, with the full-throttle rush of “Spectral Light”, a song lit up by lightening guitar flashes, a brilliantly swirling solo, turbocharged drumwork, and a tandem of scorching screams and voracious gutturals. But Burial Realm‘s penchant for glorious melody that soars and sweeps is on full display in the song as well.

For newcomers, “Spectral Light” will also introduce you to the richness of the musical ingredients. The songs are elaborately layered with a multitude of guitar parts, expertly performed, and enhanced by rippling keyboards and sky-flying symphonic synths, which all come together repeatedly to propel your heart into your throat.

The punchy grooves and obliterating percussive assaults in the songs will jolt your spines and rattle your skulls too, which is part of what makes the album such an extravagant adrenaline surge, and the tracks also benefit from dynamism in the song-craft — the variability in the drumming is a match for the whirling colors in the kaleidoscopic fretwork.

Buried Realm isn’t an album that gives listeners more than a few scattered seconds to breathe. Even compared to the preceding albums, it doubles-down on the pulse-pounding speed, the savage aggression, the explosive bombast, and the jaw-dropping fretwork virtuosity, all of it overlaid with magnificent melodic accents that help turn the songs into visions of sweeping magnificence. It’s enough to make even a hardened and jaded metal fan shake their head in wonder.

Some albums that set their sights on similarly stratospheric targets are so over-the-top (or cheesy) that they almost become caricatures of themselves, but even though this one is definitely a non-stop, no-holds-barred spectacle, it’s so fantastically well-constructed and well-executed that it avoids those pitfalls. It lifts you off the ground, rockets you into sun-fired clouds, and makes it so you’re not looking forward to coming down any time soon.

So, take some big gulps of air (you really will need the extra oxygen), hit the play button below, and blast off:

“I am very pleased to present and share this new record with everyone. I’m honored to be joined by some killer musicians who’ve influenced my writing and playing over the years. Their contributions have truly helped bring the album to the next level. The general lyrical theme on this album is a paranormal and psychological twist… mind tricks if you will. I think its overall atmosphere is more energetic and aggressive compared to my previous two full-lengths.”

Now we come to the guest performers. Feast your eyes upon these names:

And now here they are again alongside the tracks where they appear: